Space has become less and less a chance for opportunities day by day. The same beat played out on earth has played out from planet to planet, galaxy to galaxy. Once humans were able to harness the energies at the core of each galaxy it seemed so open, this black nothingness that most reside in. Today it has been marked off with lines sharing this space with a specie of humans birthed in a different galaxy at a different time. But before we get to them, perhaps we should see what achievements we’ve made.

The Daikron Corporation, some would call them the ambassadors of earth and human kind. Others, like myself, call them tyrannical money grubbing ingrates who have no appreciation for hard work. They are ruled by a few business men who use their money to buy out militias in the area to keep things steady. Over the course of time their connections with the government have become more solid and are even now petitioning for the removal of “Neutral Colonies” from The State.

Our Neutral Colonies, my home. These are different worlds, asteroids, or even broken down battle fleets where people can live and still be close to The Mines. This distinct arc in the universe is where an assortment of different high efficiency fuels have gathered. Some of it is oil from ancient civilizations gone by and others are more reactive like Hybrid Crystals and Ingrogarious Vegeatation. Merchants here have been able to make quite the sale to the business men looking to beat Daikron. The citizens here have a real sense of community effort. These civilizations are made up of both species in the known universe, the humans and the Cyril. They look like us, at least most I’ve seen, and the only real difference is some appearances and the way we live.

Cyrilia and their government, The Zephryl Order. They keep peace for the most part and are very odd as a specie. Instead of using minerals and plant life to help build their civilization their entire building method is based on organic compounds. Despite what humans have imagined these structures actually look very nice and almost feel like a home built from living trees. They also seem to feed on pure energy rather than transforming chemical bonds into energy. A very strange specie but very respectful to nature itself. Currently they have no quarrel with the humans or the Neutral Colonies. 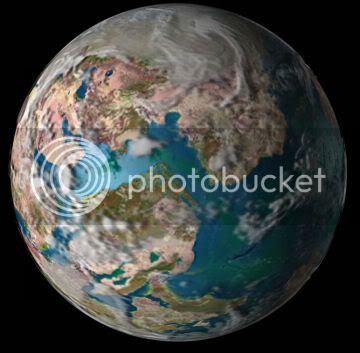 The Daikron Corporation has started hiring more militia and the Neutral Colonies have become more defensive. Things have been on the edge for awhile with battles taking place an all too common thing to hear of. Interestingly enough many have managed to be won but many have failed as well. The punishment for insurrection is complete annihilation to fight is to die and to live is to fight. But just what will happen here?

You’ll be playing the citizens of one of these Neutral Colonies. The Colony is nicknamed Truth and is numbered 407. Sign up and enjoy. (And before anyone asks, I’ll be playing the militia men controlled by Daikron)

Name:
Age:
Race:
Appearance:
Job: (If it applies)
Equipment: (this is hand held equipment. Technology is plasma based)
Ship: (If you have one.)
History:

I'll be making a sheet. Just info on levels of technology/items available to colonists and it any physical changes have happened to humans due to lng-term low-gravity living or are there artificial gravity generators/medical tech keeping humans with bones worth a damn?
P

Original poster
Technology available to colonists are pretty much based on who and how many wealthy Neutrals are around them. If you have about 3 of them in the vicinity we are talking high grade infantry weapons and medium powered ships. (Medium meaning something like a ship with lasers but no gauss cannon)

As far as colonies go they are domed and have artificial gravity machines. The domes themselves have defenses again based on who lives there.

In our story the amount of rich people will fluctuate but start at 1 so the Militia will not think about attacking us right away. So technically we should be limited to some slightly dated but effecient plasma weaponry for civilians.

Tom Piro said:
Technology available to colonists are pretty much based on who and how many wealthy Neutrals are around them. If you have about 3 of them in the vicinity we are talking high grade infantry weapons and medium powered ships. (Medium meaning something like a ship with lasers but no gauss cannon)
Click to expand...


So wait... its easier to get your hands on energy weapons than slug throwers? I would think it would be easier to produce a mass accelerator over a laser or plasma gun but that could just be my traditonalist thoughts.

Also, what would an example of tech level level one stuff be?
P

Original poster
Alright before I set up my character sheets here let me get to the tech question.

Well Plasma is actually cheaper to make in this universe than it is to create a "junk tosser." However, Plasma is not as strong as the Gauss Cannons/Rail Guns. The armor on most ships are designed to absorb the Plasma weaponry rather than take heavy hits. This is where we kind of do the trade off between defense and special defense. Either you get heavy material that takes massive plasma damage or you got lighter material that blows apart from mass being tossed at extreme speeds.

Another excuse I can come up with is that magentic materials powerful enough without using the electricity needed to run all the other systems on the ship are rare materials only found in a few systems.

So now that we got the trade off explained I'll go ahead and put up character sheet-ness. 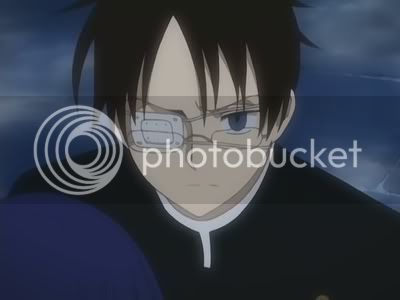 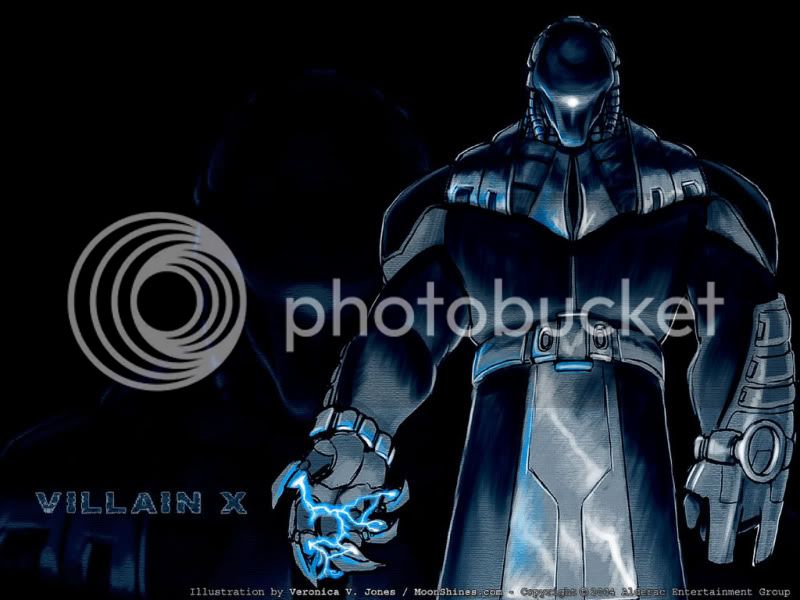 Job: 84th Fleet Captain nearly regarded as 3rd in command in the Militia.

Equipment: The most notable is the patch over his right eye which hides a recent addition to his arsenal. This is a neural robotic enhancement which allows for different visions and calculations based on vision.

He also wields a Force 7 Plasma Semi Automatic Pistol. It has quick cool down due to the lower heat in these shots. It fires a full clip, 20 charges, in approximately 11 seconds.

The other weapon he uses is only used when he puts on his armor. It is a STAT-35 Mini Rail Gun. It magnetically accelerates 35 bullets of multi-tempered Titanium shells of .55mm at approximately an entire clip every 13 seconds. The entire gun itself weighs in at 45lbs and costs a lot to maintain thus not used often.

The Armor suit, aka Odin, functions not only as protection but a distinct strength and melee enhancement as well. The gloves are fitted with high powered electric currents powered through Lerium Crystals. The suit is kept on Kaido’s ship for the most part.

Ship: Thanks to Mattelder and his spectacular drawings. 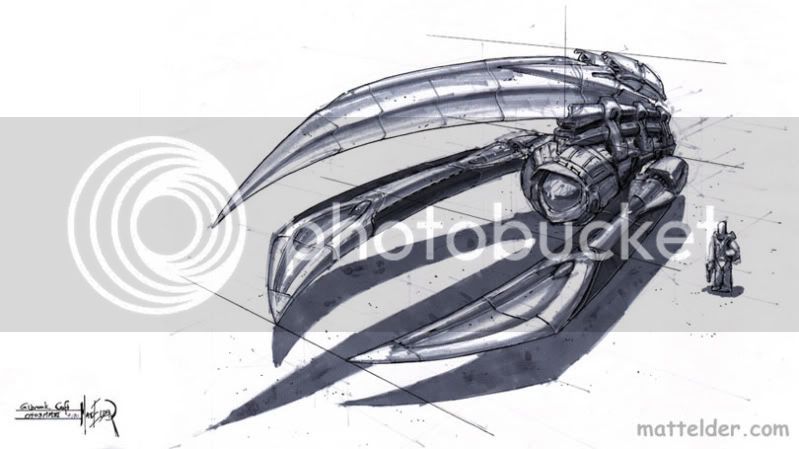 History: Kaido was born in a Neutral Colony but was recruited by the Militia at a young age. His views have always been extreme and with his constant dedication he was able to be promoted quickly from private all the way up to Captain of the 84th.

With his continued ruthless attitude he has been able to complete tasks that others would hesitate at and even his crew have an unnerving feel toward him. He could almost be called insane or heartless but it has earned him a powerful voice.

His childhood was military training and the ability to handle weapons. New test weapons were even brought to his hands in an effort to see whether or not the brand new technologies had any side effects. Physically there is nothing but the radiation from certain clips not holding the cells right has left his mental state ravaged. 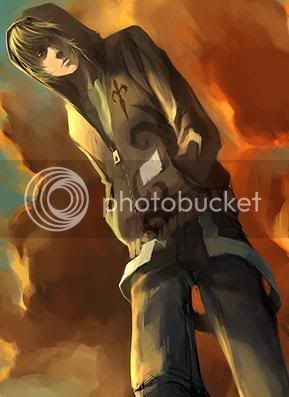 Job: Runs a personal Mechanic business out of his home on Truth for any broken ships that come through.

Equipment: An old 2040 Magnum that fires 6 massive shots at .75mm. It has the handle of a Deagle 45 and a kick of mini shotgun.

Ship: Again thanks to Mattelder and his drawings. 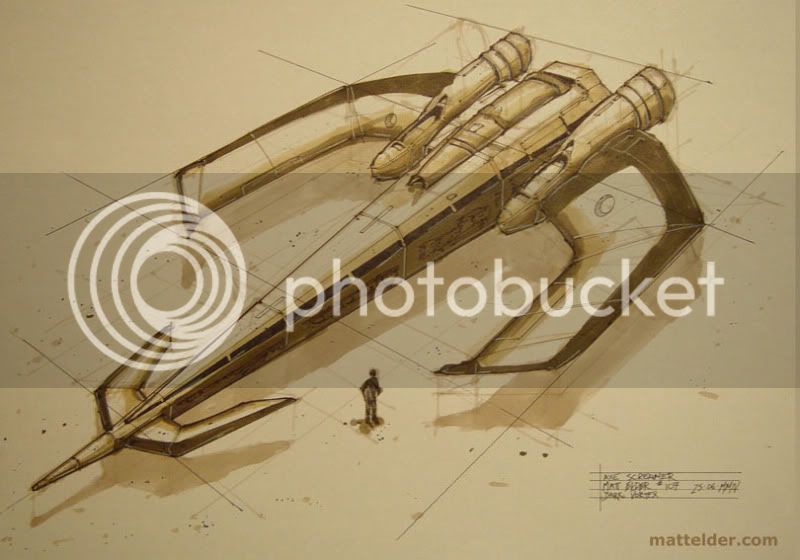 History: Alan is pretty nice for the most part. He dresses in what clothes he can get his hands on but he loves to wear the hoodie in the picture. His father was the one who taught him how to fix ships. The man was one of the pilots of the resistance and died several years ago. The Daikron Corporation has been to blame for Alan’s misery during that time and any chance that has come up to deal a blow to them he would take it.

So far he has been directly responsible for many ships getting up and running and back to the front lines. Yet, he still is not a completely recognized name. At the very least his job helps keep his home at Truth and him around his city. He has a routine from day to day and knows the people of the shops he goes to and some of the people he passes on the street.

Overall Alan is just another kid who lost his parents and is making a living through his convenient specialty.
V 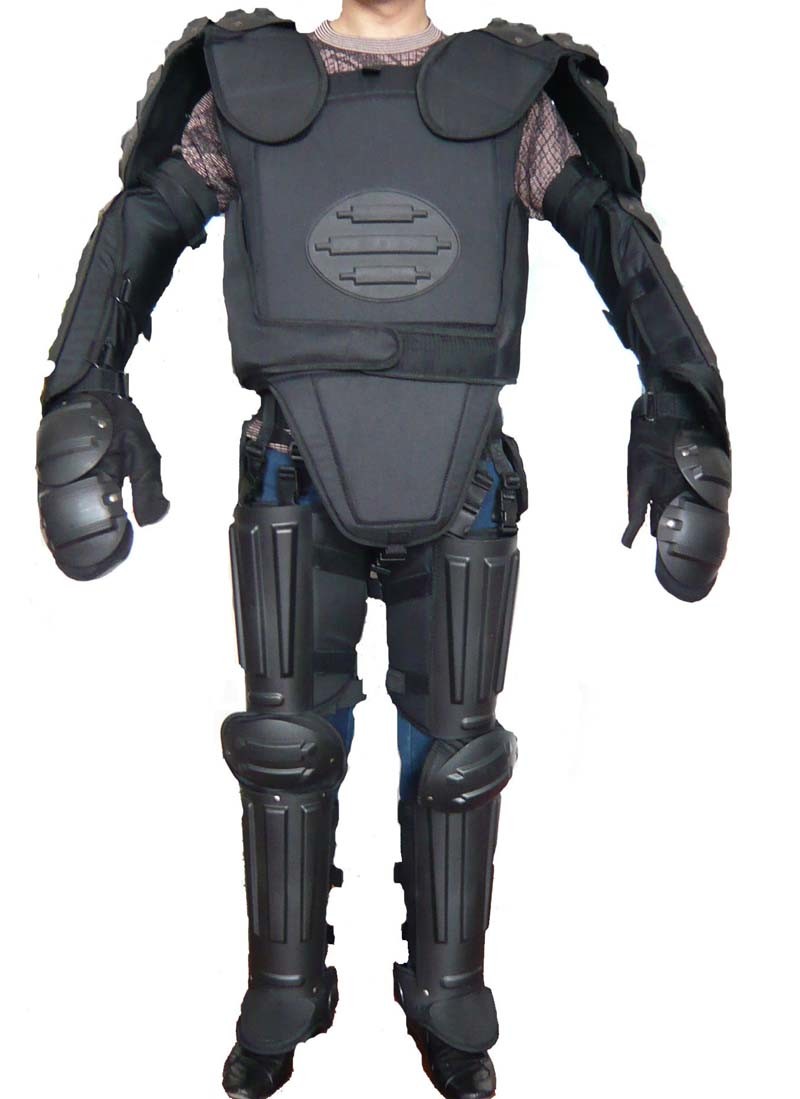 Slug pistol, (Hollow point rounds, poor armour penetration, 9 round clip semi-auto)
MK. 9 firestorm smg (each round is a small containment unit with enough plasma to burn through armour, 20 round drum magazine large bore barrel, poor accuracy,slow projectile speed, not generally deployed and is kept in a secure locker in the security booth)

History:
Born and bred in the neutral colonies Brandon has never known any other life, extremely trusting of the aliens along side which he grew up hes never known any Cyrilian to cause a problem. Determined not to follow his parents' careers in the mines and protective of his home he joined the small security detail in the docking port necessary as least as a gesture to the powers that be that contraband will at least be deterred. An recent months security was become tighter as stories of militia attacks mount, more men, more weapons, tighter control on what comes in and goes out of the station. This has led to some friction witht he richer residents of the colony but for the most part its just a sign of the ever more dangerous times.
P

Original poster
Alright sounds good. Vay's accepted although I would like you to expand on the equipment a bit more if you can. (Like explain what the Riot Armor can take as far as bullets go.)
P

So I'm assuming everyone who said "Looks Interesting" or something along those lines either said that to improve my self-esteem or to get others to join it because it had good ratings. (Just kidding not trying be condescending.)

But if there is a something missing let me know so I can correct it rather than let things die off and take guesses as to what wasn't working.
Show hidden low quality content
You must log in or register to reply here.
Share:
Reddit Pinterest Tumblr WhatsApp Email Share Link
Top Bottom