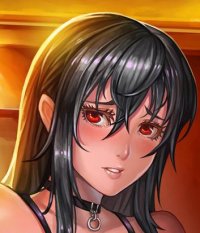 For 1000 Years there has been peace across the world, no ninja wars no wars of any kind, a Golden Age... there have been small battles here and there, and whispers of a gathering darkness. But for the most part, it was wonderful, and the world had moved forward.

However the Dead Lands, or the Land of Graves, Land of Bones, Land of Dragon Mounds, Land of Fallen Giants, The Land of Screams, a land to the West of what is currently the known ninja world. As Seen here by this Map...
(Yes I know my map sucks ok... and I lost my map I had of the Dead Lands... I just have this map I edited) 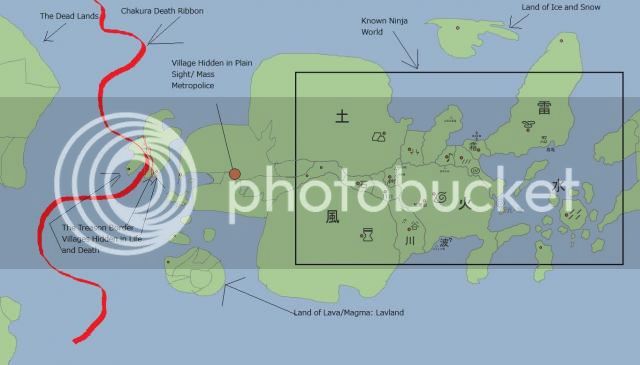 The Dead Lands, are basically from over 3500 Years ago, the information was kept hidden, a history wished to be forgotten.... this is now coming back to bite them.... but the Dead Lands in Truth are the old world, before what we know as Ninja came to be, the new land, our current world was to be a world where no one used Chakra, and to prevent the Events that happened there... from happening to our world.... a Massive War that drained the chakra from the land.

The Dead Lands are said to suck the chakra from anyone who steps there so that they can only live, and to use jutus could kill a person, due to the war that left the land dead and dry, hence why they are called the Dead Lands... No one has laid eyes on them or set foot on them in over 1500 years... the first expedition back was the last... and they have a border... all countries call Treason if one crosses the line... and will be hunted and killed if caught.


But the reports are saying, monsters and things can be seen and heard there... and that ships have been seen close to the west coast of the current world... Raids by mysterious ninja, and so on.... have brought this Golden age to ruin.

The Kage's have decided to defend and try to keep this golden age going, behind the scense... however if their worst fears are realized, they may have to take up the War kuni again and fight.... a Enemy unknown.
But it is nice to know over the 1000 years of peace the training and contests haven't been lax...
---------------------------------
Guidelines:
I would like to keep the Minimum of Kages down to 3 per village. And you are allowed 4 chars :3 because we have a big RP... I will also list the Villages and the Members of each Rank.

I will allow sages and Jinjuriki.... My personal power Beast Blood, isn't Sage Mode, or Jinjiriki... but it is kind of a KG, that isn't... my char's story is sad.

You can have 2 KG one from each parent assuming you married... and those clans had a KG.

You can have your own special Jutsu, no instnat kills though... we need this to be fair... 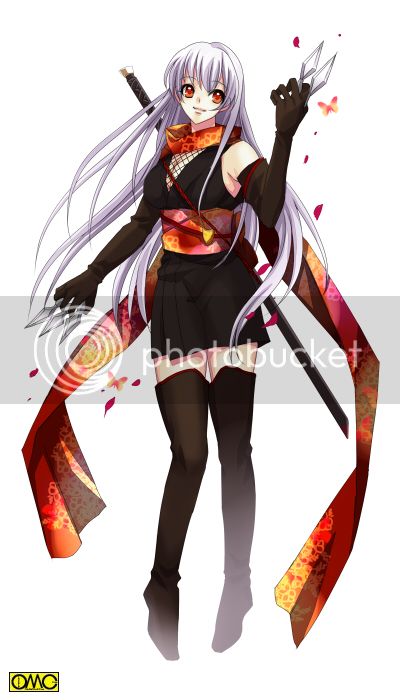 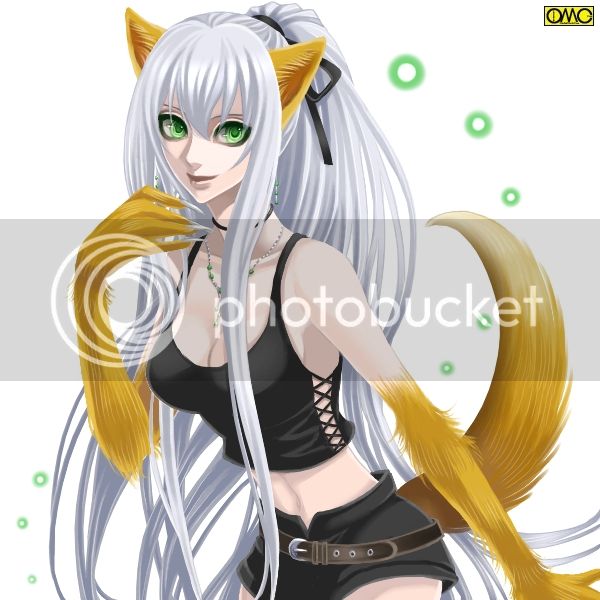 - Thunderbird Summon
- Thunderbird Sage Mode
- Lighting Wind Smithing
- True Flying Thundergod: no need for kuni, but one does need to know where they are going, it can also be used in the Tanzo Style of combat.
- Kaminari-fū yoroi - Thunder Wind Armor

Bloodline Jutsu(KG):
- Lighting Wind Release: Tanzo Clan's KG, her clan sees Lighting and Wind as the same element, they use it in smithing, and can instantly learn any lighting or wind jutsu, but they auto hybrid it to a Lighting Wind Version... This allows them to use jutsu that is highly dangerous to attempt for other ninja, if not impossible... as some skills are.

- Beast Blood: Her blood is laden with chakra, and draws chakra from the environment, but also infuses it with her own, and sends it back, enriching wherever she stands, this is also why she can communicate with animals, and why she can use a sage mode at will... she can also use it to make her jutsu more saveage... also this blood can't be sealed off like a Tailed Beast or a curse... it is part of her very being... she hold back the blood to 5 - 10% in her blood though... due to how her appearance changes after that, her senses and personality are more beast and child like due to holding back though.
Her beast blood allows her to communicate and ask for assistance from animals and plants... and they inturn protect her...

-- Beast Blood Release: When she allows her beast blood more than 10% releasing in her blood, she gains more speed, agility and endurance, and more power, much like the 8 gates, but she becomes more savage and ruthless, but unlike the 8 gates, she won't die from the use of it, instead, he might have to be knocked out...


History/Bio: When she was about 3 she was kidnapped, along with alot of her siblings and other village children... they were missing for about 2 years, but when the anbu found her, they found the faciity was a bloody mess, most if not all of the research was shreaded, and the animals were protecting one little girl... who looked like she had been experimented on and was crying... her brother survived, just to be consumed by the beast blood... he went insaine and savage.

Shizen herself is a mystery, her patents kept the doctors away from her, and taught her self control over her own beast, as to why she wasn't consumed or fully went beast is unknown... it left her traumatized though so she doesn't speak... and is likely to cry out like some hurt animal if hit... or she was... now that she is older she isn't such a cry baby... but if hurt enough she may cry, and the result of that is never good... something will always find her.

Sages and Kage's also have seen how places flourish where she is at, and she is amazing, however she herself refused testing, what little she does speak now sounds more like a animal growl than a human... in fact she likes the company of animals more than people. She lives with her parents and helps around their settlement, and can even forge weapons very very well.

The Tanzo Smiths are known as the best in the land of fire... known for their beauty and very very intricate works.

Shizen has her own way of fighting, she has never been to school, or even tested, but she has trained with the Kage and a Few Sages, and has good remarks about how well she can fight... but she is normally never called to go on a mission due to the rest of the villages outlook on her, well most anyways... she is a freak and abomination, and shunned, though they will serve her, and she can buy from people, it is mostly a quick transaction...

The Few Missions she has gone on were successful and the situation was dire, she came through... but again mostly comments on how she didn't stay in the tents or had a nice warm sleep in a bear den when they had to sleep in cold tents nearly freezing all night. 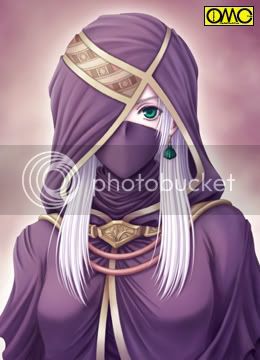 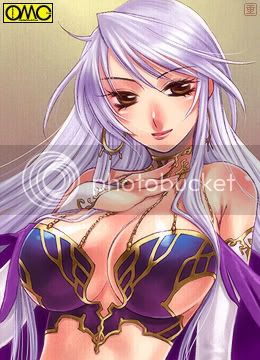 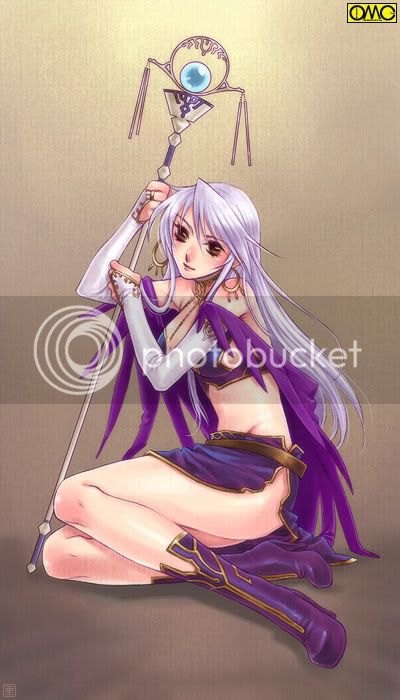 Hiden:
- Invisible wind: Basically able to hide their weapons by using wind to bend light.
- Unnoticeable: a Jutsu no one but the users and clan can remember, it allows one to roam around unchecked, though looked at never seen, and sensed but never detected... the villages main Jutsu for remaining hidden all these years.
- 8 Gate Snych: A skill by the clan that normally keeps to themselves... the 8th gate when opened is routed back into the first... which is then routed to the next and so on, users of PMT KG, are better at this due to their perspective manipulation.... however the skill outside of this is dangerous... the 8 form a 9th... with the use of the Mystigan one can progress to break the 8 and form them into a ring in the body, that creates the 10th gate... again normally very very dangerous for ninja outside of the clan to do...

Bloodline Jutsu(KG):
- Perspective Manipulation Technique(PMT): Nyx Clan, This is the reason why said village lives in a big city and devoped ways to hide themselves, as they themselves can change perspective on anything. "Dies Died Will Die, all a matter of perspective" Meaning they can be as old or young as they wish, as well as change the outcome of most events... on their own, they keep this to themselves and rarely use it for such, it is a powerful KG that can be used many ways.
- Mystigan: A Ocular Jutsu said to ether blind the user on use and allow signless casting, or allow one to cast above kage level jutsu with little to no effort... the real effect is this.... one can see the chakra around them, and manipulate it without signs... as well as boost it... however, this comes at risk to the vision itself, and once that goes, no more mystigan, the chakra cost on the body is great too, and when using the 10th gate skill... ones body if not trained enough could go boom... the Sakjuku clan, owns these eyes, and is not from the land hidden in plane sight... Victoria's father was from said clan... her children possess both as well... in a single KG called Perspective Mystigan.
It isn't as potent as using both at the same time, and it basically works like a Sharigan attached to the 10 gates, one may not go blind, but they are not doing PMT stuff even close to what their mother can do.


History/Bio:
Victoria was born out of a peace arrangement with Nyx and Sakjuku clans, and never fought ever since, however the only Sakjuku clan member in the village is her father... well was her father as he didn't have the KG of the rest of the village. She herself inherited the KG of both the villages... She rose to become kage and retired after her term was up.
She now gives advice to others... she like the others from her village like to not be in the lime light. However recently events require that she be a ambassador... and perhaps help the other villages... so not interacting with other villages is now no longer a option.
Show hidden low quality content