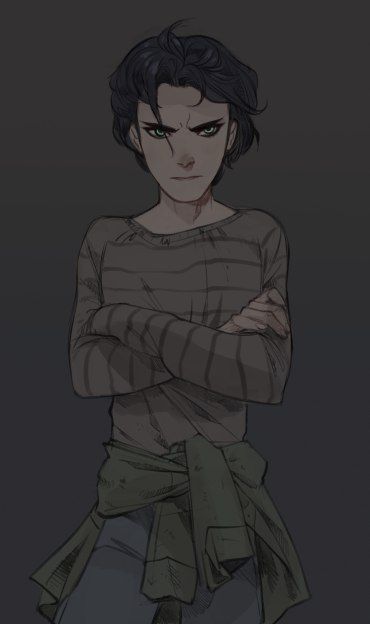 "They called me Thiago, but I hate it, so just call me Sol or Soleil, unless you want a busted skull, got it?"

Personality: Gruff and rough around the edges. Thiago is foul mouthed and doesn't want to get too close to others.

History: Thiago grew up in the slums of a rather large city, staying in a rundown orphanage until he turned 13 and said orphanage ended up being burned down. With no where to go, an older teen who was part of a gang caught him trying to steal from one of their "bases" (really an abandoned shop) and instead of killing him since he was so young, took him to his mentor for "training" to not only be a better theif, but to join their ranks and not try to stupidly steal from them again.

Abilities and Skills: Thiago has improved in his stealth, becoming a somewhat skilled pickpocket in recent years. He's not that good at fighting or shooting; but he's still has a lot to learn regardless.

Strengths:
-Sneaking
-Being quiet as a mouth
-Cutting a bish

Weaknesses:
-Can't cook
-Trying to learn how to hotwire a car he sucks at it
-Can't shoot

"Get up, Sol." came a gruff sigh over the sounds of pained pants coming from the boy before him on the ground who groaned softly in distaste.

"C'mon Axel, why am I gonna need to know how to throw punches if I can already use a knife? I'm already learning how to shoot." Thiago hissed.

Axel, a young man with ashen hair and tan skin, he was a fighter, in body and spirit. His patience, however, was thin. Scowling the older male crossed his arms and narrowed his eyes in warning.

"If you don't get ya ass up right now, I'm gonna crack ya head down to the white meat. Get up. I won't say it again." Axel responded, watching in satisfaction as Thiago scrambled to his feet then. Although the threat wasn't serious, the teen knew better than to try Axel's patience, especially when he was really wound up and eager to fight in some way. A teen no more than nineteen, with tan skin and vitilaigo that left many blotches of lighter skin watched with a sigh. He was another apprentice, the first for Axel, and knew that things wouldn't get very far with these lessons.

"Axel, give 'im a break, yeah? You hit him pretty hard you dummy." he pouted, earning a derisive sniff from Axel.

"Yeah fine Opal. Y'all go clean up and meet me at the warehouse in a few, there's gonna be a meeting in another hour or so anyway." Axel huffed, body relaxing as he rolled his shoulders and neck; pleased to hear the pop of bones.

"Okay, Axel." Thiago and Opal spoke in unision, the former sounding disgruntled and displeased while the other was slightly more chipper.

"I hate meetings, they're stupid and unnecessary. Our gang owns the Slums, no one wants them so what's the point of even keeping tabs anymore when we got some strong as fuck people in our ranks who have talent?" Thiago grumbled as he washed away dirt and grime from his face after being thrown to the ground face first at least twice.

"Because, they're our enemies and have bigger and better territories. Which means they have better stuff, so if we keep tabs we can make sure they're not a threat....plus some in our group steals their stuff that they don't need, but we do." Opal explained.

I hope that doesn't come back to bite us all in the ass. he thought with a frown as he followed Opal.
Reactions: Joan

Name:Angelica, no one knows her last name

Age: no one knows for sure, but they guess about 15

Occupation: running away from anyone or anything that would try to contain her

Personality: combative in every way especially against authority, energetic to the point of bouncing around of the balls of her feet most of the time.

History: Angelica was left on the doorstep of a nunnery, and taken into their orphanage as a foundling. She was, from accounts written in records, a very calm and content infant and toddler. It was upon being sent to a family that was an adoption candidate that she began to show the first signs of rebellion. At only four years old she ran away and miraculously made her way safely back to the orphanage. They tried again to place her with a family a year later but with the same result. When they sent her a third time only six months later, she ran away but did not return to the orphanage where they obviously no longer wanted her. She only wanted Sister Margaret, but they would not allow that and Sister Margaret told her flatly that she could not be a mother to her. She didn't need them anyway. So at barely six years old she was living on the streets, bolting at any sign of a police officer or social worker. She'd learned to be able to spot them from a mile away. There were a few people who helped her secretly, letting her do small jobs for food or money. Most days though she spent scouring the junk yard for anything she could pawn or sell on the street. She was good at it, and managed to always have food and clothes, even if they didn't always fit well.

Her luck had held out very well until a few days ago when she had fallen asleep in the park and was found by two cops. They dragged ehr into the main precinct and were trying to get her to give her information but she wasn't talking. She stood with one foot on the wall of the cell, arms crossed over her chest defiantly during the entire interview. The officer left but he stopped at the door as it clinked shut, "Kid...you aren't hurting anyone but yourself...I wish you could see that...I really do."

Equipment: nothing to speak of...when she does get something she usually sells it to buy food.

Abilities and Skills: Quick and smart, has become adept at parkour and knows her way around the city better than most cops, can speak three languages which she picked up on the streets, good fighter which is aided greatly by her speed

Weaknesses: underlying terror of going back to the orphanage she ran from, trusts no one, refuses to attend school and is as a result not as educated as she should be for her age, cannot do the most basic of math, cannot read.