What is your most TWISTED character?

In the roleplays we see lots of different kind of characters, but how often do we see characters that are just TWISTED? (Well, besides Characters played by Asmo! XD )

I'm talking about those characters that go far beyond the realms of being quirky, strange or a little weird. Characters that can be and are down right disturbing.

What is YOUR most twisted character?
K

Haha, mine was made to not exactly be twisted... but he ended up with a crush on Asmo's character...

Livak, in conjunction with Raines, murdered several men, slitting their throats and licking the blood from his fingertips.

He started out as a young man with almost single-minded concentration who was afraid and thrilled by fading into the background. With the dogged intensity, he ended up being creepy.... too bad we never finished the roleplay. But I know Diana was scared of Livvie and Raines xD
L

Let me think... Eddie is a bulimic cannibal with HPD (pay ATTENTION to him or he will EAT YOU. But then he will feel bad and probably throw you back up later). I think that's as twisted as I've ever gotten.

I reeeeeallllly need to get my crap together for hargonstein.

I made a Character for a Horror rp once named Hal. He was a Loner who lived alone in a hut in the middle of the Colorado Rockies. Among other things he would kill rabbits and eat them raw. He was a creep to say the least.
B

While the character started at first as a GM-controlled villain in an Ironclaw game of mine, the character evolved into something so much better. The players immediately took a liking to him as a villain, despite his direct opposition to the party. Suave, debonair and cunning - never fighting directly, working through minions or legal action than by force or magic. In fact, the character was not a magic-user: he was a completely political character. The times he had 'caught' the heroes, his "honor" would implore him to reveal his scheme and leave them to figure a way out on their own... always coming a bit ahead, even when defeated.

While this campaign finally reached it's end, Wir'lovel using a dark spell he did not know how to use to save the kingdom... at a great cost. The spell was necromantic in nature, he was expelled from the continent, and thus: out of the game. The spell did more, though: channeling the necromantic energy for the spell had ended his life - he became a lich, and his stagnant mind slowly went mad.

On another continent, in another game, he became my character. His political aspects tempered with necromancy, his silvered tongue and handsome, still-living appearance got him a good amount of respect... and a few lovers, of both genders. He rose quickly to the rank of advisor to the place's archmage... twisting rumors in his favor... winning friends and allies among the mages, thieves, warriors, and workers of the village... ever-ready and eternal to make his strike and work towards his true agenda: To purge the world of stereotypes, to change the thoughts of the people towards respecting the mind instead of the body, to bring forth a new era of magic and knowledge... and slaughter anything that got in the way of his 'dream'.

It was a slow slope, one which I was able to play out his every fall towards his "well-intentioned madness". I loved the character very much... the game ended, sadly. Wir'lovel himself was finally ended after a successful coup, shot through the skull with an arrow forged from the bone of a dead god.

However, his legacy lives on: both in my characters descended from him, and as the Demigod of Deception in one places' world.
V

Drake, blood abdicated vampire that goes into a bloodlust after drinking to it just never ends. Sex and feeding are forever linked in his mind and none of his partners has ever survived. Though blood > sex for him, and the gender of the victim does not matter in either case.

As you all will soon see, mine is Sahar.
P

What character of mine isn't twisted in some way? 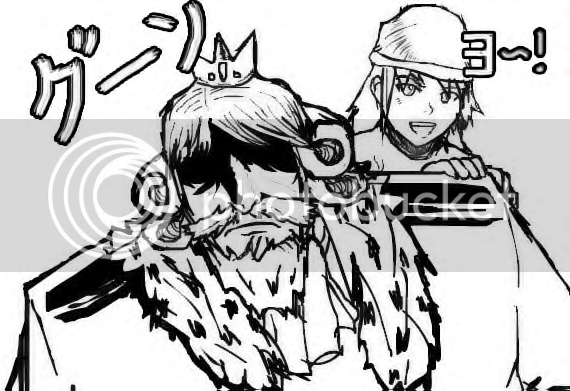 Colie and King Weavel are probably the most twisted characters I have outside of psychopaths. They originated on the Proboards Iwaku in Nov of 26 during the so called Iwaku Civil War, which really dealt more with Pharaohs and other random things vs. an actual fray like the 2008 Admin War. Colie should up as a random loli and King Weavel appeared as a minion because her magical girl powahs. Then in Jan of 2007, I ran a shortly lived webcomic called the World According to Colie, which was aborted 7 months into the run because of a lack of interest. However, in the three years she has been roaming around the forum, she's evolved more into an evil smart ass with a Hulk like Burger King as an ally.
Show hidden low quality content
You must log in or register to reply here.
Share:
Reddit Pinterest Tumblr WhatsApp Email Share Link
Top Bottom