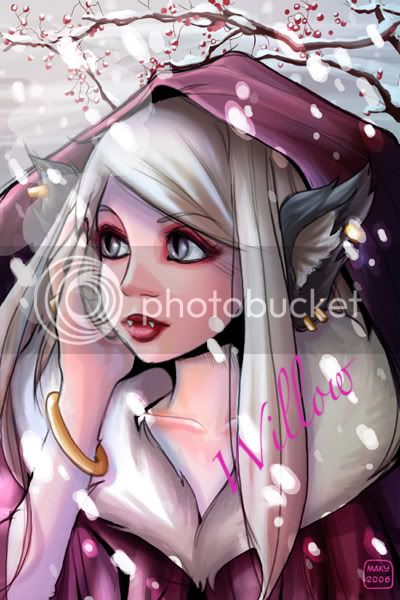 Name: Willow Clodoveo
Age: 318 (Looks 20)
History: Willow is the oldest of two children and is highly protective of her brother and is very sweet natured to everyone. That is why she is so loved within her pack. She also has a bit of brave and strong side and she has been a bit sheltered from the real world.

Plot:Willow comes from one of the oldest lines of werewolf; her father is the leader of the pack. He was the one that made the truce and the agreement with the vampires and stopped the war between the two. The deal was that every few hundred years the leader of the vampires would come and gather up a few strong men, they would be used for guards or what not and there would be peace. Now when the vampires come to gather the men, there is a new leader running the show (I was thinking it is the son of the former leader and your guy) and he spots Willow and finds her attractive and at first he just wants her as a toy but quickly falls in love with her and decides he is going to marry her.

I was thinking that a new war breaks out over what he has done and he still won’t give her up.

I am looking for someone who can play a dark guy, who is forceful and a bit brutal with Willow at first, because for a while she resists him.

So if you are interested just P.M me and we and discuss this further or we can just jump into it! XD
T