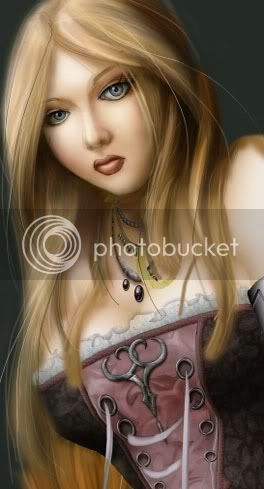 Name: Katherine Wallace
Age: 17
A little history:Katherine can tend to have a shy side, but she also is strong and believes deeply in god. She has to be strong; she has seen two of her siblings dye from sickness and has struggled with hunger and with work. She wants to give herself to god, to not worry about death and to just work for god and his miracle.

Plot:
Katherine is a young women coming home from visiting a convent. {This will be set in the Middle Ages or a little later.} When she is taken by a man who is not just any man but a vampire who decides he likes her and wants her for a pet. Latter on he decides he is going to turn her and she hates him for that. But hides it well and pretends she cares for him and his coven. Then she disappears, making him believe that she has died, but really she has just gone to sleep and stays that way until the modern day.

When she reawakens she decides she is going to hunt her own kind and really wants to kill her maker and his coven. Now I was thinking that she can either meet another vampire or werewolf and they fall in love and this can happen either before or after she leaves the coven.

Also I was thinking that we can role play the first part before she goes into hiding. Also I would be asking you to play the two males. We can discuss this further if you have any questions, so just P.M me and also I am willing to listen to any ideas you might want to add! XD
Show hidden low quality content