Many years have passed with mermaids living under the sea. Deep in the dark cold deaths of the ocean where no real human can go. There in the castle lives King Tritan and his six daughters.
Attina
Aquata
Andrina
Arista
Adella
and Ariel

Everyone knows that Attina is the oldest, so therefore she will be the one to take the thrown. Even though this is true Attina sticks by her sisters through and through and because she does so she wishes to overthrown her farther and share the thrown with her sisters. In order to do this they need an evil power and that is where the evil sea witch comes into play. This "sea witch" was the sister of King Tritans wife. Jealus of her sister she killed her and Tritan sent her to the deepest, coldest part of the ocean where her cold heart could lay. When the sisters go to Ursula she tricks them into becoming human. She said that they didn't have hearts cold enough to kill their farther, and the only way she would help them is if they can kill their one true love. Now the six of them lurk a small town waiting for their true love waiting to strike, but what happens when they find there true love and killing them is the furthest thing from their mind.

Original poster
Here are all of the characters for the roleplay. If needed I can always add more.

Mermaid sisters(the order goes oldest to youngest)
These are also the sisters from the little mermaid movie so this is why there names and colors are already picked. The picture doesnt have to be a mermaid from the movie though.

1. Attina(has orange fin and orange bra)
2. Aquata(blue fin and blue bra)
3. Andrina(purple fin and purple bra)
4. Arista(red fin and red bra) Taken by Kitti
5. Adella(golden like tail and drak green bra)
6. Ariel(green tail and purple bra) Taken by me
The true lovers
I decided that whoever plays a lover for one of the mermaids can pick who they are.

If you have any other character ideas let me know.
M

Original poster
Name: Arista
Personality:
Arista is cold and slightly arrogant, with a firm emphasis on her own abilities. She does not like to rely on others and will seldom do so. She does her best to look after her sisters, but this oddly maternal quality is undercut by the condescension of it - she does not fully believe them capable of taking care of themselves. 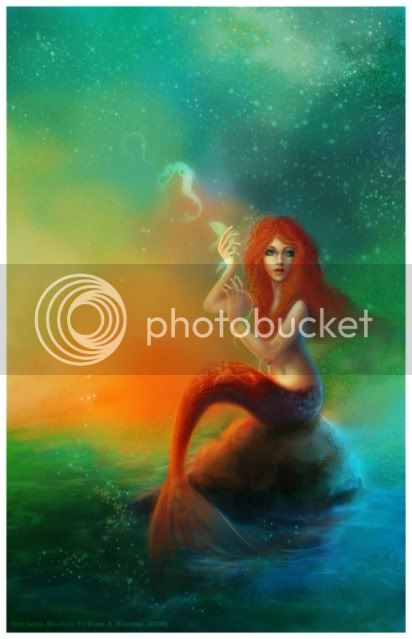 In human form, Artisa prefers to don red clothing as well. She stands af five feet and five inches in height.
Their power:
Able to trick the eyes of others into believing something is or isn't there, leading to the conception that she can make things invisible, which is only vaguely true.
Arista is also agile and athletic, giving her some fighting prowess.

Fears: Sand. Arista once went near the beaches and ended up getting caught on a tide, which swept her up onto the sand. She had a hard time getting back to the water and the sand was so hot, it felt as though it were cooking her delicate tail. She does not like to go near it now, and despises the stuff in general.

Weakness:
Because of her illusory powers, she is very jaded and does not believe people. She is skeptic to a fault and painfully slow to trust anyone. She does not believe the words of others and is highly likely to try to verify their claims before believing them.

Original poster
Ariel
She has a personality of many traits. Her mood swing changes so fast many people just relate to her as the sister with many faces. Most of the time though her soul is dark, demented. When she lost mother and when her favorite aunt was banned from the kingdom it did something to her. Made her a less understanding kind of person.

She has green eyes, medium height
Ariel was gifted at a young age with an amazing voice. With her voice comes great power. She can sing to someone causing them to fall into a trance, but it takes great focus for her to do it.
Fears
Losing her sisters
electric eels
needles
Weakness
Fire
Urusla
Strength
The sound of her or someone else singing can bring her strength
Show hidden low quality content
You must log in or register to reply here.
Share:
Reddit Pinterest Tumblr WhatsApp Email Share Link
Top Bottom