She was a loner, never one to try and make friends. She was just that girl in the corner. And she thought, why should that change? It's never made a difference, so why make it happen?

She became the rebel, the one that was targeted. She learned to fight, and became a winner. She became ignored again, all the way up to her senior year of high school. She'd started buying cigarettes from the college kids wanting extra cash when she turned 17.

No one knew what her home life was like, but it was rumored that she lived alone in an apartment now that she was 18. She had been kicked out of the orphanage she had lived in. Her parents died in a car accident when she was young, they said.

But in reality, her father left her mother for a younger woman almost ten years ago, and it had been all she and her mom could do to keep things together. She worked part-time at a bar cleaning before it was time to open, the only place that would hire her when she was only 15 and barely legal for working.

Still, she got good grades despite seeming disinterested during class. Teachers left her alone. She didn't smoke on school property. She was just... ignored. 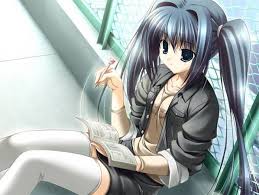 She was one of the few good girls that existed in this world. Never did she raised her voice to anyone nor did she ever throw a punch. A benevolent person who would sacrifice her time to help her fellow man. The moment she did help out someone, soon after she would be gone.

It would be thought that such a sweet and kind girl would have many friends flocking around her. In reality that wasn't the case. No one really gave the time to get to know her nor did she give the time to know them. She felt so out of place in this world populated by people who couldn't see past their selves. She always sat in the front row in class and avoided the back rows where the cool kids sat.

Even now in her sophomore year did she have any friends. Her parents were always away on business trips leaving her to her lonesome when she got home. Her family didn't really see each other on a daily or yearly basis. Only the lunch ladies talked to her. In such a small world, she felt utterly alone. But she is one to never complain.

Original poster
Rei was trying to find a place to eat lunch that wasn't already crawling with students. Scowling, she gripped her paper sack and headed outside. She looked around, still searching. It seemed that on a day as nice as today even the outdoors wasn't safe for someone to eat alone. Instead of seeing this as an opportunity to bother someone and sit down with some random people, maybe make some friends for once in the last seven years, she turned and decided to search for a classroom that she could eat in.

She started walking by the classrooms, looking for an empty one. She finally stopped at a science lab and walked in, sitting at the sterile teacher's desk that was void of anything. This wasn't an often used classroom. It was merely a lab. And it looked like no one had used it yet today. There was a chance no one would be using it. She propped her feet on the desk, opened up her sack lunch, and began to eat in solitude. It was a welcome relief after such a busy morning.
K

Original poster
The bell signaling lunch time detoured Amaya's attention from her textbook. Het classmates made haste in leaving the classroom. The teacher happened to be on the phone with somebody as the kids poured out of the classroon. Amaya gathered her textbook and notebook into her brown messenger bag then proceeded out the door behind her classmates. Amaya took a different path than her classmates for she had another destination in mind. She scampered down the hallways deftly dodging students and made her way towards the library. When she arrived though, she realized she didn't have her library lunch pass on her person. Sighing, Amaya made her way towards the lunch room unenthusiasticly. Her travels were cut short when her curiosity got the better of her. As she walking down the hall towards the lunch room, she took notice on a classroom door being slightly ajar. Not knowing any better, she crept inside the rather ill lit room.
J

Original poster
Finishing her lunch quickly and still having some time left, Rei had fallen asleep with her head on the desk. She didn't hear the door come open any further, but she did see a light difference as the hall light spilled into the darker classroom. Lifting her head, Rei blinked at the figure at the door, enveloped by the light and squinted.

The girl in the doorway was by far the most beautiful creature she had ever laid eyes on.