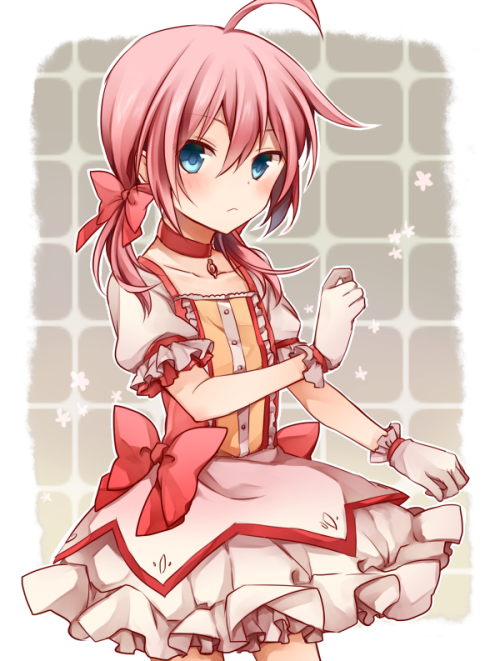 Casey Pimberton, a Second Year at Rosewell High, walked down the crowded halls full of boys and girls that varied in age and appearance. He exaggerated this fact because he was a guy himself. A guy that got mistaken for a girl quite a lot. To the point of it being annoying. Sighing, he stopped in his tracks and spun on his heel. With hands on his hips, he glared at the two males that he heard while he was walking by. They stiffened under his fiery gaze, slightly shivering. What was going to happen to them? Were they about to get their asses handed to them by a guy (well, a girl in their eyes) wearing a frilly, cotton candy pink dress with red ribbons in his (her) unnatural, sakura pink hair? The thought amused them, but also scared them. It was always the small ones that you had to watch out for since they had hidden strength and martial art moves.

"Listen up, assholes!" Casey started, voice full of his frustration. "I. Am. A. Guy! Okay? Under this cute dress is something that you would find in your own pants, which is where it should stay!" He finished with a huff. After a moment of silence, the young teen whipped back around, dress twirling with him. Head held up high, he stalked off down the hall, basking in the shocked silence that enveloped him. That was until he heard the phrases 'was she serious?' and 'she seems a bit crazy, but she's still hot'. She! She! She! Picking up the pace, Casey turned a sharp corner and continued down a shorter hall than the one he just came from. People took one glance at him and was scattering out of his way, sensing his murderous aura. It practically rolled off of him in dark red waves. He reached a certain classroom—Art Room 2, pushing the double doors wide open before stomping his way inside.

"EVERY GUY IN THIS SCHOOL IS A MORON!" He exclaimed, forgetting that he was a guy and there were guys in the Art Room, letting himself plop on one of the many couches that decorated the room. The people, including himself, were all apart of a club—the Trap Club. Earlier in his high school years, Casey had decided to create a club for people like himself. And, by that, he meant people who were mistaken for the opposite gender. Apparently, they were considered to be 'traps' or 'reverse traps', depending on the person's biological gender, so that's how the club's name came to be. Being the founder of said club, Casey was also the President of the club. It was more of a club to let out your feelings than to actually participate in, but, sometimes, they would participate in school activities, using their looks to their advantage. "Why can't they just understand that I am a guy who likes to wear feminine clothing sometimes?!"[/fieldbox]​
M

Age
17
Gender
Female
Sexuality
Lesbian
Peronality
Alex loves playing the role of the heart breaker. Its not known by a lot of people that Alex is, in fact, a girl, so she uses that to her advantage. She loves to flirt with the other girls and take them out on dates, all the things actual guys would do. But the moment things get to serious Alex ends up chickening out, afraid to let the girls learn her secret and have them disgusted with her. Because of this date and break up ordeal Alex is often referred to as a womanizer. Alex does act the part of it, but hates being called it. Deep down, Alex sort of wishes she could just be an actual boy so she wouldn't have this problem. Don't get her wrong though, when it calls for being serious Alex will wipe away her coky attitude and defend her friends or herself until the very end without a single complaint.
Role
Vice President, though its sort of a secret to those outside the club.
Other
Alex looks, talks, and acts like a guy. She is even tall for a female, nearly six feet, which helps and she has been cross dressing since she was eight. Alex is also a great guitarist and singer, often wishing she was in a band. She also participates in Karate after school.
Alex was standing outside the auditorium next to a girl. The hallway was empty at this time, so she and the girl were alone. Alex was dressed in boy atire, as usual. Today's outfit consisted of a punk band tee-shirt with the sleves torn off. She had on a red plad unbuttoned shirt over it mostly to keep her arms warm, army colored skinny jeans as her pants and her worn out black converse. The girl in front of her was cute. She had her blond hair curled, though it was a little frizzy from gym. She core a light pink frilly shirt and light blue shorts. Her face was beet red and she kept fiddling with her silver bracelets. "So, why did you want to meet with me?" She asked in her deep voice, glancing around the hallway. She knew, of course, why the girl was here. She had been through this before. The girl chewed her bottom lip for a moment before looking at her and bursting out "I was wondering if you wanted to go to the movies this weekend..! U-Um, you know.. L-Like a date..?" The girls voice was rather nervous. Alex looked at the girl and smiled gently at her. She leaned towards the girls face, placing her hand under the others chin and tilting her head up to look at Alex's face. "Awww, your face is so red. Its adorable!" She said with a low chuckle. Alex slowly started to lean into the girl to kiss her when sudden a voice came booming from down the hall.

"EVERY GUY IN THIS SCHOOL IS A MORON!"

Alex cringed at the voice, knowing it was Casey's, who else could it possibly be. Alex flashed her award winning charming smile at the girl. "Sorry, that's my friend. He seems to be having a rough time. I should go check up on him and make sure he's alright." She said charmingly and turning. She began jogging off, hearing as the girl said "he was so sweet for going to see his friend". As she turned the corner, she grinned and let out a chuckle. Another cute girl asked her out today! And so far she was the fourth one this week! SCORE!! Now if only Alex could change her parts to a mans, then she could officially have a girlfriend and her life would be set!

She kept her cocky grin on her face as she turned into the art room where Casey was. "Hey there, Casey. Another stressful day being called a girl?" She asked, her voice not quite as deep as it was while talking to the girl yet it was still pretty boyish. Unlike the club president, Alex embraced being called a boy which is why hardly anyone knew she wasn't one. She enjoyed being a temporary male here and loved the attention she got from other girls. Alex plopped herself down beside Casey, her arms resting on the back of the couch with a cheeky smile. "Lighten up, butter cup. At least your a cute girl."
Reactions: 1 person
K

Original poster
[fieldbox="Casey Pimberton, magenta, solid"]Casey was silently sulking on the couch when the doors opened once more and a familiar voice floated through. Turning his head, he stared at Alex as she came to join him on the couch. Her words did nothing to improve his mood. In fact, it might have just worsened it. "Of course, it's been another stressful day! No one can seem to understand that I'm a guy," he huffed, crossing his arms in frustration. He glared at the space in front of him, flushing a light pink color at Alex's compliment. "That doesn't make me feel better!" He exclaimed, throwing his arms up in the air. Deciding that he had enough of him and his problems, he turned to face Alex, a sudden grin on his face. He had noticed the older girl's behavior and was fairly curious about the causes of it.

"Enough about me and my daily problems. Let's talk about you because you seem to be in a good mood," Casey stated in a gleeful tone. "Did you get asked out again?" He questioned. That was usually the reason for Alex's good mood. He was always excited when she got asked out, even though she could never actually commit to any of her admirers. But Casey wasn't one to look at the negative sides of things, so he pushed it aside.[/fieldbox]
Show hidden low quality content