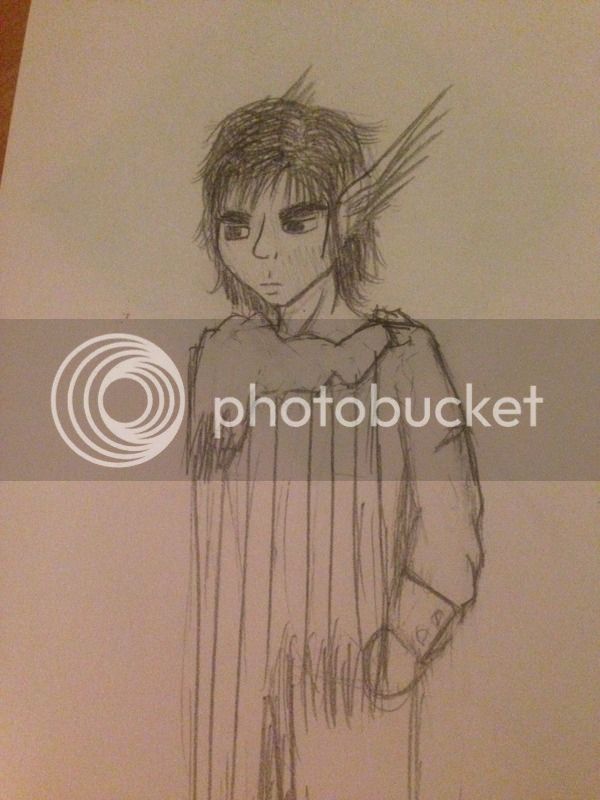 ​
It was the screaming that woke him up from what passed for sleep on this hell-hole of a planet. That whining squeal like thousands of tiny nails drawing spirals on chalkboards. That was a shuttle; sand catching in the engines, creating an even more obnoxious wind tunnel than the one they ran on anyway.

Vo pushed himself to his feet, rolling his shoulders as the weight of around six hours of drifted sand fell off his cloak and settled in a gray-brown cloud at his feet. More sand shuffled out of his choppily-cut hair as he straightened, turning his black eyes toward the the sky. He squinted against the ongoing sandstorm; this place was always under sandstorm, which was why it made a great hideaway for someone small enough to hide away under the wind-warped stones.

The screaming of the engines made it easy to narrow the area of his search; a glimmer of silver in the sky soon confirmed the shuttle's position, and Vo's thin mouth curved into a smile.

The wind was at his back, and he vaulted over the rock he'd been using for shelter. He slid down the soft sand built up on the other side while he wrapped the collar of his cloak over his nose and mouth. The shuttle was heading west; it was probably going to drop either on the dunes or the rocks.

Hopefully not the dunes.

He kept his head down as he moved over the sand, skirting the edge of the rocks that had been his shelter. The sand whipped at his ears, making it difficult to follow the engine's screams which differed only subtly from the shrieks of the sandstorm. Twice he had to stop and squint against the sky to verify that he was still tracking the shuttle in the right direction.

The engine's flare as it exited the atmosphere was the only indication he had of the shuttle's change in trajectory, but it was enough. He hunched his shoulders against the wind and doubled his pace, forcing his stiff knees up as the sand piled around his feet. Sleeping with at least forty pounds of sand distributed over one's body tended to take its toll on one's circulation.

He scanned back and forth as he sprinted, finally locking on a dark shape slumped on the edge of the sand. It missed the rocks. Cursing his luck, he slowed to a stop, crouching down; the clouds of dust and sand would blend against his wrap; provided he didn't move, he would be invisible. He hung back long enough to be sure that if the Dropped was unconscious before he skulked forward.

He was a long fellow, bigger than Vo himself, but that wasn't exactly unusual. He had what looked like faint tattoos all over what skin was visible; even a large mark on his face. And, of course, his feet were far too big for Vo to use his boots. Just once he wanted them to drop off a pygmy or something. Still, not completely useless.

He was reaching for the collar of his shirt when the Dropped's chest suddenly rose. He jumped, his gaze darting up to the face when his eyes opened and his jaw nearly dropped.

The stranger's face and clothes were already being coated with the same dull gray-brown that coated everything on this planet, but his eyes were a startling blue.
Last edited by a moderator: Mar 16, 2016
Reactions: Pyralithia

Was he dead? Did they finally kill him? It felt like it, everything was dark, he couldnt see a thing, was this hell? Wait...There was pain....A lot of it....Was there pain even in death? 'Whats that sound?' Seonadrai thought as he heard a kind of squealing noise around him. Then he felt wind....Vicious wind on his skin, it whipped his hair around violently. 'This doesnt feel like death...' Things slowly came back into focus, he felt the wind pelting him with something small 'Rain?...But its not wet...'. Finally his blue eyes snap open, there was a medium sized cut on Seon's right cheek just below the markings as well a bruise on the left side of his jaw, his lip was split and a bit swollen. Overall it looked like he'd gotten into a nasty fist fight, and lost. 'I'm in a sandstorm??' He thought in utter confusion, he could tell because the sand stung his eyes causing him to squint.

Green orbs quickly scanned his surroundings before focusing on the...Man? Hovering over him. Balking Seon tried to move away, but as soon as he used his muscles, agony hit him like a jackhammer. Hissing in pain he falls back against the sand. "Who are you? Where am I?" He demanded in Runaric (similar to Australian). Scowling he realized the other man most likely didnt understand his language, so he switched to Universal asking the same thing.
Last edited: Aug 4, 2015

Vo straightened to his feet when the Dropped scrambled away, assessing as much as he could in the few seconds before he had to speak.

The dropped was scared, obviously; who wouldn't be? He didn't seem to understand where he was, which was strange. the system hadn't exactly been perfect when Vo was convicted, but he doubted it had fallen so far as to not even convict a person before banishing them here. But he didn't have time to focus on that; he had two options at the moment, he could poison the newbie while he was weak, leave him to die on the dunes and steal his clothes, or he could have an extra pair of hands on his side for once. Maybe actually get some meat to eat, a pair of ears to listen while he slept. If he wanted an ally though, he'd have to give a damn good reason. As soon as the Dropped knew where he was - the Exile planets were infamous across the cosmos; he'd have to have lived under a rock his entire life not to know it - he was going to be on edge. The Exile planets were full of criminals, and not only that, the worst criminals. There were no innocents or petty crooks here; the second he revealed the planet's identity, he revealed his own as well. He'd have to give the dropped a good reason not to run screaming.

Frowning at the stranger Seon watched him carefully with his eerie blue-green eyes. 'Hes not a human....Nor Runaric....I think I've seen his kind before...' He thought as he waited for the man to either make a move against him or answer his question. But his response was a bit unexpected, blinking he clenched his large hands into fists. "So those prava (Runaric for pussies) finally made up they're minds." He half-growled as furious injustice swelled burned through him. The markings covering his body started giving off a faint neon-green glow that seemed to pulse before he took a slow, deep breath. The action caused him to flinch, gah it hurt. But it succeeded in calming his heartrate, slightly. The glow faded, the markings returning to black. 'No reason in making this stranger anymore skittish...'

Seon was a bit intrigued at this man's words though. "I thought nothing but cold blooded killers were banished here. Why would you help me?" He asked in a suspicious but lighter tone than before. He forced himself to sit up against the pain, though a silent groan did escape his lips. From what he could tell his right leg was broken, maybe fractured. A couple ribs were definitely broke. His left shoulder felt dislocated, his left hand likely broken too. His back burned like a mother. Ya his "interrogators" had a real field day with him, too bad he was tougher than 10 of them put together.​

"A great multitude of reasons" Vo replied, forcing confidence into every fibre of his body. "For starters it's safer in groups. For another if I'm offering to save you you can reasonably assume that I'm both capable enough to be a good ally and in a bad enough spot that I can't afford to kill you, and finally because I was a doctor and probably really am the only person willing and able to keep you from dying of your injuries."

As he spoke, he moved slowly forward, and when the last sentence left his lips he was knelt by the Dropped's favoured leg and began working on the injuries without waiting for consent.
Show hidden low quality content