The world 10 Years Ago

Some of Iwaku's members had yet to fully comprehend that 'orange' was both a food and a colour, much less spell their names.

Mariah Carey's "We Belong Together" was #1 on the Billboard top 100! (Hollaback Girl was second)

My family had just moved into an apartment, where we would stay the whole school year, and then move to our current home.

I could name all the continents and all the planets. I had even drawn a picture book on them. (With words that were literally just scribbles.)

I went to Busch Gardens Williamsburg for the first time.

I beat my first video game.

And: I began my habit of chewing my nails.

I was raised in a family that wanted me learning early.

I was in grade 11 and still deciding on that whole college thing while serving in the army reserve. My friends and I were playing things like Halo 2 and SOCOM: US Navy SEALS 3 a lot. I was really big into Blink 182, Sum 41, and the Offspring, which were massive bands at the height of their popularity. Most everyone skateboarded, and longboards weren't a thing. You got them to do tricks rather than exclusively piss off motarists. Nobody heard about global warming, our biggest fear was the hole in the ozone layer getting as big it would bombard us all with unshielded solar radiation. The whole "holy shit we're killing our planet" thing didn't grab social consciousness until a couple years later when An Inconvenient Truth became a super huge hit. Pop music was still as largely awful in 2005 as it is today, only the stars back then are people nobody remembers now, kind of like how nobody in 2005 knows anybody from 1995.

The world was still largely shitting itself over terrorism because 9/11 only happened 4 years before and everyone agrees life changed immensely after that and a lot of the really invasive legislation and bills took places, spy agencies gained terrifying new powers, and nobody really knew or understood what was going on or the long term consequences, and just about every country in the Western world went on a huge pro-military stint with increased popularity for the armed forces and renewed interest in modernizing their military forces/ promoting good relations with the general public.

Here in Canada,we basically fell in love with our military and the people serving in after a decade or so of total neglect and apathy, and while a huge percentage of the Canadian population didn't agree with the war in Afghanistan, the near unanimous mentality was to support the troops, which I think was really inspiring. It also showed people could give a shit about those in uniform without necessarily agreeing with what the government makes them do.

This was also around the time where digital camouflage became a thing, with Canada becoming pretty much the first country in the world to adopt a digicam uniform, whose design the US marines would later make a lisenced copy of, and this increased spending also revamped militaries away from a cold war mentality of conventional warfare into fighting low level insurgencies against asymmetrical forces.

This was also around the time gun customization became a thing and guns started being covered with more rails and pointless accessories than a Kardashian. I think the US military, for instance, had only just started using optical sights on their rifles, and M-16s were just starting to lose favour to the M4s. There weren't really drones at this point, save the new Predator drones which were being promoted as an alternative to fighter jets for air strikes because there's no pilot to risk. One went down in Iran somehow and everyone freaked out about Iran having access to super high tech and rare military hardware. Now, there's so many drones I think they come out of vending machines.
Reactions: Gwazi Magnum, Robeatics and Minibit

I was not an admin of Iwaku and I was running a different site that was a sister site to Iwaku. O___O

Me and Gibs were living together for the first time and/or about to live together. >> I can't remember exact dates.

I had still never had a real job before. 8D
W

On Google Maps Street View. There's a tiny clock sometimes at the top left corner that lets you roll back up to 2007 when the GoogleCar last went through.

I was murdering people... in blank-fire exercises, and being mistaken for Prince Harry, while going out with my first older woman (oooh!). I had also finished my first unpublishable angel novel and had a car shaped like a jellybean.
A

Ten years ago, I started a job at another local computer shop. I would work there until October of 2012.

Not a whole hell of a lot else to report. Work was my primary focus.

10 years ago I was going into the 6th Grade, my one year of homeschool.

This around the time I first got exposed to roleplaying because it was around this time I started RP'ing on Habbo Hotel.
Main games I played at the time was Halo 2, Kotor, Pokemon and Red Alert 2.

And my ABA therapy was still in full swing, so there was a lot of group stuff going on.
Which was sometimes fun, other times I was just outright miserable.

I can't speak for anything Political.
Because my young understanding of it back then was "People from Sand Areas blew up tower, now we're fighting said sand people".
It wasn't an area I was that concerned with, especially since 911 itself had happened when I was 7 so my reaction to the school freaking out was "What are you freaking out about? The Schools fine, can I play pokemon now?".

FOLKLORE MEMBER
2005, I had just dropped out of college and found full-time work at a file room for HSBC. Shit sucked, but I didn't have anything better. I did get a Playstation 2, Devil May Cry, Shinobi and Castlevania: Lament of Innocence around this time, however. Those were good times. I also promised myself that I would buy DMC3 once I beat the first game on Dante Must Die, which I did a few months after buying it. This year was also the year that introduced me to Painkiller, my favorite FPS ever. 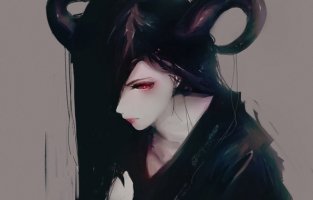 Well I was 9 and I had just started playing games on my own. My parents still viewed me as the child prodigy and was doing just about anything to groom me into their image.My dad was upset about how my older brother was turning out and so forbidden me to play games. I managed to make my way around it. I was playing Mario, crash bandicoot, spyro, metal gear solid and a whole bunch of games.

I also moved forward with my art and was doing pretty well. Importantly I had started writing and exploring into short stories. Even though I only saw it as a hobby then they were good times.

Those were the only good things I could remember. Everything else was bad. Like fist fights with my older brother, upholding my parents unreasonable standard, nearly being kidnapped, started hearing voices and even sorta delusional. That last one is hard to explain.

All in all that was me 10 long years ago.
Reactions: LunaValentine
Show hidden low quality content