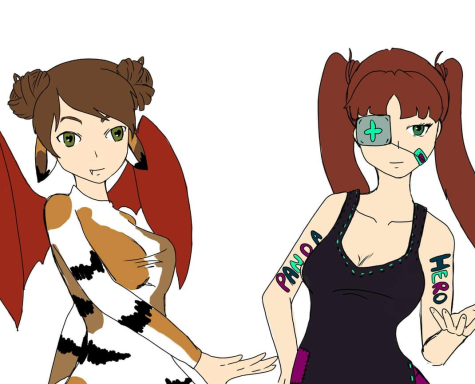 Buba had found Ophelia on another world. The girl obviously did not belong where she was. Her clothing was modern, her accent obviously not from the medieval world she found her in. Buba took aside the poor girl, feed her and asked her what happened. The story was really simple. She fell through a mirror that had somehow or another got connected to another world. Then she was here. Buba was quite confused. Ophelia did have magical abilities, she could see it in her, but they were no trained and still raw. Either way, Buba offered to help Ophelia find her way home.

That was two months ago.

Buba had no idea where Ophelia had come from and through searching through several modern worlds, Buba hadn't managed to find Ophelia's modern world. The heterochromia witch sighed as she put a hand mirror down from the chair she sat at in her dining room.

Shougen, her familiar, was lazing on the table in his black cat form. He was a demon that Buba had captured because he was terrorizing a town. She made a deal that he was to serve her as her familiar for a certain amount of time before gaining his freedom. It was that or she killed or turned him into a magical weapon.

Breakfast was on the table, Ophelia's room was upstairs, which was only a bunch of rooms for guests who traveled the world to stay. The stairs that went down into a living room with several bookshelves and a TV. Out of that room was a long hallway that went straight or right. Going right went to Buba's room, Buba's storage, which Ophelia was told never to go into, and the garage. Going straight lead to the kitchen, the bathroom, mirror room and the dining room, also where Buba took her guests. A doorway in the dining/sitting room took them out to a small shop, where in this world, Buba sold trinkets like tarot cards and magic stones.

Ophelia rised up early in the morning for having a little excercise before breakfast. She made it and went to her room to do some bench presses on the edge of the window and some pushups. She needed the physical challenge before work to keep improving and being more able to take the risk of going back home. She knew every day she remained there her little brother would be alone, her friends worried and his studies neglected.

She heard the witch downstairs so she got down to occupy Bubba's right seat and chat to her. She always came late and so she was never specting her, but always made her breakfast nonetheless. How was it, Bubba? I didn't spect you so early.

"It's not that you never see me because I'm late, I'm just up early doing things," Buba told Ophelia when she came and sat down. Buba was an early riser, but she often times skipped breakfast, "I have a job today, you can come along." Buba told Ophelia, "But it won't be on a modern world. I'm afraid we've checked all the worlds I currently am connected to for your home. We'll just have to wait for me to find new ones to connect to." Buba told Ophelia as she picked up her cup of tea to sip. She had been looking in a hand mirror most of the time as she spoke.

Does that mean... you got no clue where i come from? Ophelia had thought she was from a world previously visited by her mentor, not just from any... Does that mean that somebody tampered with the mirror? Are we safe? Ophelia asked pretty much affraid she would be trapped into the pocket dimension that was their lair.

Buba looked up at Ophelia as she started to spout panicked nonsense. The heterochromic witch waited for the young magic user to slow down in her ranting. Of course, Shougen was snickering on the table, the black cats hide heaving from the short spitful chuckles.

When Ophelia was done speaking, Buba turned the mirror and pressed it to the table, holding it up enough that Ophelia could see into it. Right now, the mirror just held her reflection. "I suppose I should give you a small lesson in dimensional traveling. Not all mirrors are MY mirrors. My mirrors are ones I've crafted and ones that are within the shops that I have over many worlds. I wouldn't so carelessly put a mirror randomly somewhere for some child like you to fall into. That mirror, the one you fell through, was created by someone else somewhere else." Buba told Ophelia, "Meaning the world you fell into was a world I have walked, but the world you fell from I'm afraid I have to locate."

Buba chooses to ignore the demon and she warned Ophelia to ignore him too. Ophelia knew nothing about the subject, so the demons comment was only there to get a rise out of the young girl, "I can only walk worlds I have put mirrors on because I don't have the natural power to walk worlds. It takes a lot of magical energy for me to have to make a new mirror to put on another world. And the mirrors can't be tampered with because they are mine. I suppose they can if someone is strong enough." Buba half mused, "But they would have had to live a lot longer than I or born with more raw talent. But... I agree. You need to grow some wings..." Buba sighed, "It's possible I could never find your world again."

Ophelia looked at her mentor as a puppy that doesn't get the order would look at it's master. The explanation was simple enough and Ophelia asked after pondering for a while Does that mean the ways to the dimension you were in crossed? or could i have had the raw power to do it unintentionally?

The young redhead sat over the little demon, now in the size of a cat, and pinned it without much air under her buttocs. She knew the little demon was not only just trying to get on her nerves, but also not even fully awakened. Can't we just use a trackign spell to follow the energy and do some back w,,,,ack

"No, im sorry. Whatever wherever you came from, was closed." Buba told Ophelia, placing the mirror down on the table, "if you have that natural ability, then you are powerful indeed. Its not unheard of for world walkers to walk at a younge age with no idea what they did or where they came from. There is a chance you will do it again in a place I can't help you. You do have the guft of magic, though."

Shougen leg out a muffled hiss ad the girl sat on him, his claws and teeth coming out to bite her ass.

Then it's even more imperative that, given the chance, i accompany you. Ophelia said completelly honestly, pushing her fears to the back of her mind, knowing that keep herself paralyzed would only make her more unprepared for the eventualities of her journey.
Ok, so... where are we going this time? She said taking the cat on her lap, in some kind of peace offering
Show hidden low quality content
You must log in or register to reply here.
Share:
Reddit Pinterest Tumblr WhatsApp Email Share Link
Top Bottom