No matter how much time passes, this world will always need the Witchers. Normal-folk may discriminate and see them as completely ruthless, super-powered bounty hunters who only care about the crows, but a Witcher will be the first person they want to see when a Witch starts picking off children for some nasty potion, or Ghouls start getting to close to the city walls.

This was the story in Crowsperch in central Nilfgaard. After the events of the Bloody Baron, a new lord took over the small town, and at almost the same time, the wilderness began to get... rough. The town soon began to suffer as the ghouls and drowners in the wilderness outside the walls made travel impossible. Soldiers, merchants, traveling doctors, all cut off from the small town. Forced to communicate through bird to Novigrad.

At the end of the day, the king placed a considerable bounty on a vague target. Whatever was making the beasts in the area so violent. For months now, Crowsperch had been in a state of disarray. Citizens were a tinder patch. It seemed the city could break out into civil war at any moment. This was due to the new Lord of the town cutting itself off to the rest of the town as soon as communication with the outside world began to waver.

Some believe the new Lord was actually some kind of sorcerer who wanted to sacrifice them all and wanted to enslave them until death. Others swore they saw a red witch outside of town, near Spitfire Bluff, and she must've been responsible for all that had happened.

The only thing keeping the city from ripping itself apart was the bounty that had apparently been put on whatever had been doing this. This meant a Witcher could come and save them all. For a cost of course. However it was worth it. Right now, the very fate of Crowsperch was held in the balance. The fate of a town, who's location was vital in any war, depended on a glorified mercenary who only wanted money.

One thing the citizens had been right about, was the 'Red Witch' that had been seen at the nearby Spitfire Bluff that overlooked the sea. In day, the cliff was bare and beautiful enough but at night? At night the 'witch' merely stood. Staring out at the ocean towards the Skelige Islands, undisturbed by the aggressive beasts in the forest. The woman emitted a massive crimson light - that the citizens of Crowsperch only couldn't see because of the walls of the city - that seemed to be based from the gemstones that grew out from her shoulders, forehead and various limbs. Something the world had never seen before.

Which was why she stood out so much in the memories of the citizens that had happened across her.

Crowsperch was stuck, waiting for a Witcher, on the edge of doom. 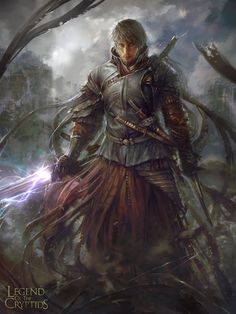 Cael Leadraig never really thought much about his lot in life. He had been taken away from his home at a young age, brought to the Witchers' stronghold to become one of them, his father having been the recipient of the Law of Surprise. His mother had wept bitterly, blaming her husband and his gambling ways that had led to the circumstances. Cael couldn't remember much about his childhood. He knew that he was the only son after four daughters but his life as a merchant's son was forfeit when his father had been saved by a Witcher and then later paid the price when the Witcher, Jorath of Gladdins had demanded "what you find at home but don't expect". To be fair to Jorath, he had not come for Cael, waiting until the boy was nearly nine before finally coming to claim his rightful due.

His life as a Witcher was a hard one, especially since it certainly wasn't glamorous and it required plenty of sacrifices that the average person would probably be unable to give up. Cael had endured all of it stoically to the point where his fellow brothers in arms had assumed the boy to be a possible mute until the day he had actually spoken, surprising the hell out of them. That had been a good memory from nearly thirty odd years ago. More than half of his brothers laid dead and cold either in unmarked graves or perhaps lost to a monster or another.

Jorath had always warned him of growing attached to people, saying that their lives as Witchers usually meant that death followed them more closely, affecting those near them. As a child, Cael had even wondered if Jorath, his mentor and possibly his closest friend, would miss him if he died but Cael soon shook his head out of that fanciful daydream. If Cael died, Jorath would mourn him but the older man would move on swiftly, focusing his attention on his next contract or mission and Cael suspected it would be the same case if the situation was reversed. He would mourn Jorath but he would not miss the man.

He had been wandering for the last week or so, picking up the occasional business and contract as he travel aimlessly through towns. It was only midsummer which meant it would still be some time before he could even consider finding a place to hole up for the winter - and before he did that, Cael would probably need to earn enough to be comfortable before he could go through with his initial plan.

"Crowsperch, aye." The peasant eyed him but shrugged. "Theys be saying that a witch or summat haunts near the town. The folk don't feel too safe so they put up a contract. You'd do well there, sonny."

Cael gave the peasant an amused smile. He was pushing forty at the current time but the mutations that he had undergone seemed to have slow down his aging and most times people pegged him as a young man at his prime which Cael supposed was a good thing. He nodded his thanks to the peasant before digging his heels into his horse's ribs. He ought to be head down to Crowsperch, rid the town of its perceived evil and collect the gold. A typical day's work as a Witcher, he supposed, a fang peeking out as he smirked to himself.
A

As some of the villagers suspected, the Baron was not at fault, at least not directly.. it was the Ruby Witch who had taken shelter just outside the small town.

The night was drawn over the sky, and had covered the area in a cold blanket of fog. The fog.obscured the area, and the Witch, who cast a scarlet light illuminated it in such away that mad Crowsperch look as though it had been shroud of a blood cloud.

The woman was standing outside the dense, surrounding woods, staring out towards the town and the path the lead towards it. The bright red hue she'd been emitting dimmed suddenly, as something came into view that made her retreat a step. A man on a horse. A Witcher, she feared. Her pupils constricted and the light suddenly magnified, and the man's attention was drawn to her, but only before the forest line was broken by a projectile. Something one would find of value. A Ruby speared the man off horse and into a nearby tree - the impact caused the gem to splinter and rip the man's body all around. The horse, efficiently spooked, ran away as the woman approached the scene, examining the remains of the corpse. Looking for the necklace, commonly worn by Witcher's. It was missing. The man hadn't been a Witcher.

Her expression evolved into one of hate and disdain as her Ruby's light reflected off the blood in the area. The Witch just stared at the corpse, as if her hate could burn away the body.
[/fieldbox]
X

Even from his young days as a boy, Cael knew better than to travel at night. Although his body had been enhanced by the mutagens and training he had been subjected to, even Cael, or any Witcher really, would rather find a safe place to camp out or kip out for the night than to travel aimlessly when the night held power. It was not to say that there weren't any monsters or beings who weren't more powerful during the day but at least they wouldn't have to come to a battle with a distinct disadvantage.

The town of Yellowsfarn was only a hard ride away from Crowsperch and from what little Cael knew and heard, was the less prosperous of the two towns but given the recent events growing at Crowsperch, Yellowsfarn was enjoying a growth in business as travelers and locals alike milled in the town, only leaving for Crowsperch to do their business and returning to safer waters.

Another man spat on the tavern floor. "I tol' his men I ain't paying no taxes until he be rid of her!"

There was an out pour of agreement from the crowd as they grumbled about their woes. Supernatural creatures were always bad for business and even for living. No one was safe. Cael listened thoughtfully. It sounded like he could get a good deal from this Baron, particularly if he was getting desperate. Taking a last pull from his flagon of mead, Cael returned upstairs, shrugging off the cloak that hid his identity as a Witcher. He had learnt that the less people knew, the easier it was for him to get around. In any case, the men downstairs wouldn't recall his presence and Cael could set off for Crowsperch in the morning without having earned any enmity from the locals.
Show hidden low quality content