Original poster
Okay so our plan is to do a Fable 2 rp. Just describe your character in the first paragraph and as things change and they get more powerful we'll mention it along with the rest of the story. Also it's really late right now and I am tired so this might need updating when I'm more awake. Another note: I can't remember much about the Tharg quest. XD

Shae hadn't heard much from Garth these days, not since Lucien started to hunt him down. She had been with him since she was a little girl, raised by his side in the perfect model after his way with Will. Of course as a Hero in training she had tried to master the other two powers, but Skill and Strength just weren't her strong points. Which pleased Garth very much since he had picked her for this exact reason. But with Garth suddenly gone and rarely checking up on her Shae found it necessary to wander around the world a bit. Mainly to see how things were going in her old home town, Bower Stone. The place where Garth had picked her up off the streets and showed her a new life back at his home.

"What do you mean you won't let me through?" Shae tried to not sound demanding but this Town Gaurd was really starting to piss her off.

"Ma'am, as I told you before," He ran a frustarted hand through his hair and glared at her. "Tharg is currently a big threat and we cannot risk letting him through."

Shae held back her sarcastic comment by biting her lower lip and turning around. ~Fine.~ She thought to herself as she headed in the direction of this so called "threat". ~How hard can it be to kill one guy?~ 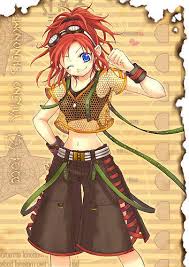 Original poster
Okay, so, maybe Theresa was right thought Alex as she sat in the caged cart.

Alex remembers the day that she had met Theresa. Working on her uncle's farm in Oakfield, her main job was making sure none of the beetles had infested the farm for too long. One day, while getting rid of some beetles that (foolishly) invaded the farm, Theresa had spotted Alex and approached the young 16 year old and taken Alex under her wing. It wasn't hard to figure out what Alex was adept at, and after a few failed attempts at mastering Will (one epic attempt resulted in a scar on her right leg and a very angry tattooist that she still to this day doesn't recall exactly how it happened), Theresa had focused the training solely on melee fighting.

Going after Lucien was going to be a long process, one that started in Bowerstone, according to Theresa. However, a guard at the Bowerstone Road had explained that the road was closed because of someone named "Tharg". Frustrated by this turn of events, Alex decided to confront Tharg.


...Which is how she ended up in this predicament.

"Oi!" Tharg yelled "This one 'ere should fetch us a good price! She's got a fiery attitude!" He laughed.

How am I going to get myself out of this one? ​Alex thought as she glared at Tharg

Original poster
"I'm starting to think I went the wrong way..." Shae grumbled to herself as she looked about the pathway. It was well worn so she knew she was headed some where, but the intimidating half scarecrow things on the side of the road were very misleading. Maybe she was headed the right way but with her desire to fight she figured she would have already ran into some of this Tharg persons goons.

Shae's ears pretty much perked up at the soung of a twig breaking in the distance. She closed her eyes and took a few deep breaths, getting ready to build up the Will power to cast a fire spell. Snap! Her eyes shot open just as a grey fluffy bunny crossed her path. She let out a frustrated growl and kicked a nearby tree. "What the hell?!"

"Oi!" Came the voice of what sounded like a very surprised man. "Who's there?! This is Tharg's territory!"

(I don't want to describe killing all those people. XD So just mention that you here fighting and my girl will appear near yours in the next post. Free you and we'll fight him together. Sound good?)
I

Picking the lock took some time, making sure that Tharg wasn't looking. Eventually, Alex had succeeded and quietly opened the door and got out. Making sure it was closed and hiding behind a cart, she was just about to find her sword when a sound caught her attention.

"What the hell?!" A voice had called out. Furrowing her eyebrow, she looked up and saw a red headed woman talking to...what looked like a tree.

"...this is Tharg's territory!" called out a man, who stepped out from behind the tree. The same man, Alex noted, that had captured her. It looked like the woman didn't have any weapons either.

She's not going to last long without a weapon Alex thought as she looked around for a weapon, any weapon. She had found a rusty sword lying on the ground. It wasn't her sword but it'll do. Alex grabbed the sword and rushed the man.

"Well," Alex said as she turned to the unfamiliar woman, "I'd watch out. There's more of them plus I think the leader of the gang is in that cabin" she said as she pointed to the cabin next to the cart she was held in.
B

Original poster
"Oh?" Shae gave the new woman a sly smile. "So I'm not important enough for this Tharg person to greet?" She scoffed and shoved her hands forwards, causing a fire ball to hurtle towards some random lacky. "That'll change real soon." A whole group of the lackies surrounded the two of them and shot the other girl a look over her shoulder. "Can you use that weapon? 'Cause we're going to have to fight our way out of this." She blasted a circle of fire arouns them, causing damage to most of the men but not killing any of them. "Well?"

Original poster
Fighting the battle was a little weird, seeing how she wasn't fighting with her normal weapon. It did the job though, and after the battle Alex made sure to search for her weapon. While searching, she started to think.

Back home in Oakfield, people always talked about the old heroes and abilities like will like they were fictitious. It was right up there with the Sandgoose: people claimed it existed but no one ever really saw it and there wasn't proof anyway. Even training with Theresa, who went into depth about the history of the heroes , she was told about will but again, she never saw it.

Seeing it in person as, well, different. Cool, but different.

Looking down at her sword, twirling around to see if it still felt the same, Alex made a mental note that she may have to stop in Bowerstone to either make repairs or buy a whole new one.

Looking up at the newcomer, Alex realized they never really met. "Er...hi?" Alex said, "My name is Alex." She said as she extended her hand. "Going to Bowerstone?"
B

Original poster
The fight was over before Shae even broke a sweat, slightly dissapointing but that was how things went when you were a cocky woman. She adjusted her goggles, which she had put on sometime during the fight to avoid getting blood and debris in her eyes, and took them off. Alex, as she was just informed, seemed to look at her with a certain interest. ~Will isn't that common...~ She remembered Garth telling her this during one of their lessons. ~So expect the cautious glances.~

She took Alex's hand and gave her a soft smile, a smile that nobody expected to come from such a fiery looking girl. "Shae." She looked to the cabin, door swung wide upon from when the Tharg person had come storming out only to be easily killed by them. "And yep. Are you?"
I

Original poster
Seeing Shae's smile was a stark contrast to the girl who was throwing around fire just a moment before. Before Alex can really process it, she blurted out the first thing she thought of.

"And you're a will user! Well, uhm, ah, of course you are! It's just...it's weird. Not a bad weird, good weird. Different weird." Alex blushed and looked away. "Sorry, I've been known to have no brain filter. Listen, I'm meeting up with my mentor in Bowerstone. You can go with me, make sure there's no more of them out there." Alex said, pointing to the cabin.
B

Original poster
Shae's eyes widened at the girl's outburst. "Why yes, yes I am a will user." She said slowly, becoming quite cautious of Alex. Never was she to be an easily trusting person, many events from the past had taught her not to be. Even Garth had to try for years to gain her full trust before she even considered to learn how to control her Will powers. "It's okay...And yeah. I'll go with you since it's also where I'm headed."

Without further interuption she took off in the direction she came in. She couldn't wait to see that dumbsturck look on that guards face when she told him what happened. Maybe she'd soon gain some respect around these parts. It seemed easy enough to do if all she had to do was beat up some bad guys.
I

Original poster
"Wait!" Alex cried out as Shae walked away. "I didn't mean it in a bad way. Theresa says I have a problem thinking before I speak and act. It's sort of the reason why I got caught by that guy." She explained as she started walking "Theresa told me about will. I've just never seen it, you know? Certainly not in Oakfield anyway." Alex said as she kicked a rock. "Why are you going to Bowerstone anyway?"
B

Original poster
"Oh." Shae smiled at Alex, completely understanding. "I get it. No worries." She waved her hand as if she could wave away the other girls fear. "Will is very rare, I've only seen one other person who can do it." She got a far away look as she thought about her Mentor Garth, wondering where he could be. "And I'm going to Bowerstone to see what it's like now. I lived there as a child." She looked ahead of them, seeing the gaurd in the distance. "Who's this Theresa person again?"
I

Original poster
Alex was relieved that she hadn't offended Shae too much--although she talked, a lot, her mouth always seemed to be miles ahead of her brain.

"Theresa was sort of my trainer. I've been living with her since I was 16. We lived in this little gypsy camp over by Bower Lake. It was pretty neat, you know, living in the wilderness. I'm meeting her in Bowerstone because she has some information I need about this crazy Lord." Alex said, smiling, looking toward the trail. "I heard Bowerstone is a ways away. It may take a while to get there."
Show hidden low quality content
You must log in or register to reply here.
Share:
Reddit Pinterest Tumblr WhatsApp Email Share Link
Top Bottom