The loud rumbling engine starts to get even louder and louder as the wheels spins even faster over the gray asphalt. The hand moves gracefully over to the gearbox and moves it to the fourth gear, making the black Mazda swoosh over the green landscape. Standing out with the shining black paint beside the green fields, forests and the blue sky. It makes its way through the road of brown rock and gravel, as far as you could see, with grass growing in the between the car track. Crushing the stones under the wheels, the car slowly goes forward. While making a racket outside, scaring off animals and birds away from the small road, the music from the radio fills the inside.
-"And that was Drinche with the song, Summer time! Thank you Micheal for suggesting this song!" The radio, now more quiet than before, still tried to fight about being the loudest of the car or the radio itself as the man continues to speak.
-"As you all know, summer is on it's way and with that, we can't miss a single summer hit! Making the next song-" A click appeared when the hand turned the little button beside the radio, and a long and huge sigh filled the empty space, except for the crisping sound the wheels were making. The sun, who was before, shining into the car, now only visible through the tree tops and ahead, there were fields as long as you could see. With the huge green grass and trees, it made it impossible to see any other roads, if there even was one. The white fluffy clouds slowly moved over the blue sky and it was very calm in the afternoon. The road suddenly turned to the left and the car followed a high hill upward. As smooth as the car was going over the road, it easily made it up to the hill and well up there, the hill was going down again only to show a very small village resting in the afternoon sun. With just as much field on the road back, there were probably even more surrounding the village. Even so, the fields around the village was being used, with dirt dug up and plants growing, it really showed a vibe of a nice small village. Other than fields the village was also surrounded by forest and the only road out was this one up the hill, yet it seemed like there was another road going into the forest, but the high grass made it difficult to see if it was a road or not.

Evelina took off her black sunglasses and stepped outside, closing the cardoor while watching the small village. She took a deep breath of the clean air and felt like only that, cleaned her body from the tight air inside the car that had surrounded her for about 4 hours. It was really a long way here and she could not understand how the people here could survive so far off the outside world. But on the other hand, that made the village seem so nice and comfortable.
The woman, wearing high heels, took out a small black leather pad out from the blue jeans. The writing pad was probably not bigger than 3,9 inches and the pages were all straight lines for her to write on, it looked old thought with the leather a bit stretched on the edges and the yellow pages filling it but it was very handy in these situations rather than carrying around a huge laptop at all time.
With a pen in her hand, she started to write in the little pad on a blank page. 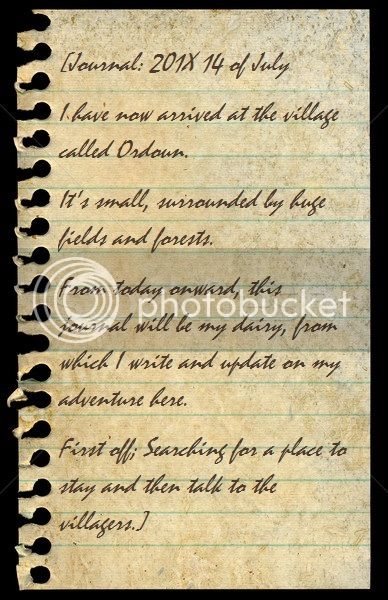 I have now arrived at the village called Ordoun.
It's small, surrounded by huge fields and forests.
From today onward, this journal will be my dairy,
from which I write and update on my adventure here.

First off; Searching for a place to stay and then talk
to the villagers.]

Evelina closed the little leather pad and put it back into her pocket and started to get into the car again, back to the tight air filled cage with a no good air conditioner. Already inside the car she missed the smell of the flowers, blooming with pink color and the sound of the wind whipping the grass fields and small flicker from the green leaves. Now, making it feel like it was only a week the snow had been all over the country, it was now summer. With a turn on the car key, the engine started to roar as she drove off down the hill and into the village. This was actually Evelina's first time here in Ordoun village. And even though she have done some research on the place, it didn't seem that scary from the point of view Evelina saw everyhting, with the sun gleaming over the small cottages.

With a loud car and very outstanding as well, it was not very hard to not be seen by the villagers. She drove past some old people and, which was chocking for Evelina, people about her own age. With a life in the big cities, it was not odd to think as to why people her own age wanted to stay in a cramped place like this. Thinking of what you can do in the cities and how hard it must be to provide for a family in a place like this, since you have to buy a lot of stuff to the children like diapers. And talking about cramped places, with the car in a place like this, Evelina found herself quite big and took too much place on the small thin roads but then found a larger cottage, thinking it might be some sort of motell. Parking the car by the side and locking it, the young woman with brown hair started to go to the bigger cottage, as her high heels echoed, hitting the ground.
R

Looking at the sign to see were to go Maurice saw a arrow pointing right."Ordoun"it said while he pressed down on the gas pedal and started spinning the steering wheel which shifted the car right.Turning his Dodge Charger Maurice noticed that the setting changed a bit it kinda got more of the feeling that he was lost in the forest.While driving he changed the radio and stopped on one when it said"Hey hey hey you hear that its one of the greatest summer hits ".Hearing the music he turned the radio up louder and started singing to it though it wasnt good because of his deep voice.While the song ends Maurice turns up a hill now ignoring the radio he started slowly making his way up the small hill his tires cracked and crunched the rocks beneath it.

Arriving in the town he drove around for awhile while taking notes.It started like"Ok im Arriving at Ordoun and from the looks of it it almost looks like its my old neighborhood which is not good.I am driving around to see whats where and I noticed theres not alot of people hear probably because of how small the area was.Looking at the people most of them are middle aged or old its probably hard for them not having to many stores so its always crowded and most of them probably have kids.
Alright I saw my cabin that im using to investigate so im going back there to give a report of what happened today Diary out"he closed the small 4 or 5 inch book and headed off to the cabin.While driving down the street it got dark quicker than he thought it would and just started to drive a bit faster not wanting to find out what happens at night.Arriving at the cabin he saw a black Mazda there"Why does that Mazda look familiar could it be hmmmm naw cant be"he said quietly to himself while walking up the creaky wooden steps and unlocking the door to his cabin.

The cottage, a little bigger than the other ones, was once the building where the leader of Ordoun lived. However, later on it have been a house used for different reasons, like a meeting with the whole village, or turned into a dance hall so people could gather together in one place during a special holiday and celebrate. Even so, the stone building with hay on the roof, stood now empty. It gave an ancient look with it's stone features, the golden roof growing hair like grass, two windows on each side of the dark wooden door.
Upon opening the creaking old door, the first thing you see inside is a small corridor. In front is a stairway leading to the second floor and on each sides are two rooms seperated by walls and the stairs. Where it should have been doors, were instead an opening, making it easy to just walk inside. On the right were a huge room that have been a kitchen together with the dining hall. On the left side was a huge opening room with chairs build on top of each others and standing by the wall together with old wooden table in the same material as the door. The floor is also made of wood except by the fireplace, were the floor surrounding it turns into cold big stone. It was probably in here where the villagers had meetings, or dance partys when a special holiday arrived. But it could have been as well a person living here, even so this was not the case. The second floor was more cramped and small, as if it actually were a garret. The room was empty, except for the dust and spiders gathering by the sides of the roof to the floor. No, by a second glance it wasn't empty, on the far end of the room there were mattresses on the floor. It looked like people where sleeping there. Or rather, have been sleeping there.

On the first floor, where the kitchen were, you could hear some noise. Like people talking. On further examination, the voices got clearer and louder.
-"...What do you mean, that this will be my sleeping place?" A familiar voice asked, in a rather angry tone.
-"Well, you see... This is the only place available right now. There isn't a lot of place in the other cottages and this is the only one that is currently not used." An old trembling mans voice answered.
-"No." The familiar voice said in a strict tone, by the sound of the voice, it was clearly a female.
-"I will not agree on this!" She said.
-"How can I expect myself to work, if I sleep in a place like this? This wont do." Now she sounded angrier.
-"Well, I'm sorry but this is what you have to work with. I can't do anything more than this." The old man said, also quite angry at the nagging.
Show hidden low quality content