Original poster
Plot​
In the town of Golem, prostitution, drug wars and gangs freely take place on the south end. Ounce in you never get out till death and since the depression of 2013 the crime rate has increased over 35%. it is now 2015 and the streets smell of death and the government officials dont care, as long as they remain fat and wealthy all is good in this not so humble nation. The police have givin up, only doing there duty for the ones paying them. This is more so the case in Golem. It is that time of year again, the time when all the rookie cops are given there badge and sent into the line of duty. In the city of Golem these rookies are exceptionally visonary. They plan to clean up the streets of Golem. Seeing as the other cops will not help them they form there own group and creating a leader among them. The leader sends them out for undercover work. Most become Prostitutes because its a easy and big bussiness to get into. In hope not to rise suspicion they only send one person into a gang and one working with drug trafficing. The other cops dont care for these rookies, there way of thinking is if they die, a higher paycheack for them. The Cheif of police is secretly an inticate part of this crime world. Will they bring justice or will they too be dragged into this dark world.
Roles and Relations
*please read all roles, more than one may effect your chara
cheif of police - is a user of drugs and also heavily traffics them for the high amout of money and usually makes deals with gang leaders.R
ookie Leader - highschool sweetheart but brke it off with Rookie 1
Rookie 1 - Highschool sweetheat with leader but was dumpped - going undercover as a prostitute
Rookie 2 - Leaders best friend - going undercover as a gang member
Rookie 3 - Rookie 2 older sister - going undercover as a prostitute
Rookie 4 - A slut looking for brownie points from cheif - dose not care too much about justice - prostitute
Rookie 5 - An ex of Rookie 4 - Drug trafficer
Pimp 1 - user of drugs and associates with gang members
Pimp 2 - not a user but gives drugs to his girls when misbehaving - may do deals with gang leader
Gang leader - dose drugs and uses them on misbehaving members
Drug Dealer - Sometimes has prostitutes*
unlimited prostitutes and gang members looking for less users though and less cops
skele
name
age
role
gender
likes
dislikes
personality
why your role
bio
other
pic or description​
V

Original poster
name Angie lynne McKenna
age 24
role Rookie 3
gender Female
likes serving her country, justice, helping, dancing, singing, drinking, partying
dislikes paperwork, being told what to do,
personality loud, blunt, playful, responsible, caring, demanding, a little vain, Childish, Adventurous, Curious, Dedicated, Determind,
why your role - Angie served in the army for a few years after highschool hoping that when she decided what she wanted to do for the rest of her life it would look good on her collage or job application. She never knew she would fall in love with serving her country. She Soon developed a heart condition in which her ventricles beat at different paces. Because of this she needed to return home and have Cardiac Resynchronization Therapy (CRT) to resynchronize her heart. The military officials told her she was not suited to be in the army when she attempted to go back. She then saw her younger brother wanting to becaome a police officer and though it was nothing like the military it too caught her interest.
bio Growing up Angie though older than her brother was very childish. curious and would follow him around all the time. When he went off to be with his friends she would stay close behind trying to get in on the action to. She had a few friends of her own though barbies and cabbage patch kids bore her easily. She would much rather be doing whatever fun stuff her little brother was doing. She kept ths up till she was 11 and she wanted to be girly like all the other girls. She began hanging out with a girl named Jamie who taught her how to use make up and told her all about the latest fashions. It took a few years but she finnaly was able to read and understand all those magazines and be caught up on the latest fashions without any help. Jamie and her would often go shoping talk to cute older boys and though this was much funner than barbies and cabbage patch kids she still felt bored easily. When she was 16 she started adveraging a new boyfriend a week, she was always looking for a new thrill without commitment. It was when she was 18 and sitting in the guidance office that she realized she had wasted so much time. The woman asked what she planned to do a month from now when they graduate and what she has done to reach that goal. Absolutely nothing was the awnser and that summer while everyone was preparing for collage she knew there was no way for her to be accepted into one and she had no idea what she wanted to be because she was unprepared for life. one day she stumbled across an advertisement of a man saying how the army prepared him for the future. Soon after she joined the army and developed her heart condition.
other
pic or description

Original poster
name Misti Ann Parker
age 22
role A drug user (Aphetamines aka speed)
gender female
likes feeling energetic, excersice, sports, competition, challanges, improvement, proving herself to others, showing off, running, apperances, perfection
dislikes doing nothing, feeling worthless, gaining weight, critisism, cleaning, anything out of place or order,
personality OCD, self conscious, competative, determined, assertive, demanding, hard working, tom boy, indifferent usually in social matters
why your role misti was always athletic, in high school she did track, cross country, and field hockey. she was superb at sports and it was her true joy in life. Though she never could be better than amazing and she wanted to prove that she was going to become a pro athleat. In ther senior year of high school she took sterioids, she wanted to be better than all her peers which she was all ready. soon she became addicted and when many collages asked her to play she accepted on in Texas. She then found out that she was adverage when it came to collage athleats and she wanted to be more, she trained harder and took more steroids. durring a drug test though she was found positive nd was banned from playing anymore. she now has an addiction to steriods just to feel normal.
bio Misti never had the typical childhood, daddys little girl, mommy was her hero and a older brother who fought with her all the time. though they all loved eachother. No one took notice though how unusally she was, how much she hated to stay sitting, and how many times a day she steped n the scale. No one noticed how she never asked for pizza and always asked for salad. Her parents were just gla she was good at school and was determined. her determination hurt her though and her parents did notice when a friend stopped coming by or if there was a sudden break up with a boyfriend, and though surprised by her lack of care for the situation to notice of how odd she was. In fith grade she became anerexic but stopped years later because it was affecting her plaing ability and not the weight like she had hopped for. she went to collage to become a sports physician but had to leave school early due to the positive drug test.
other tribal tattoo on her left hip
pic or description 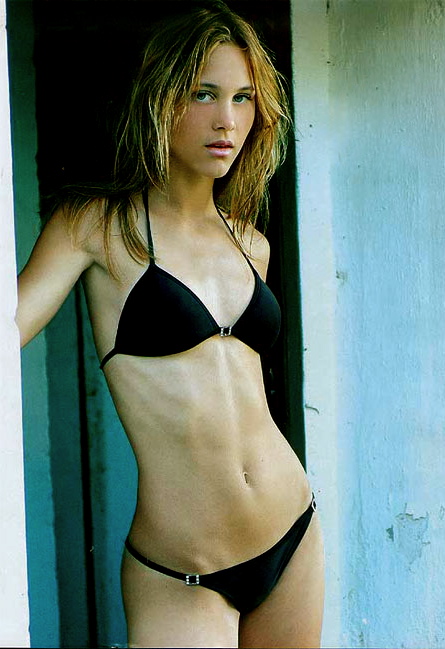