The Rhyme of a Story. (A Horrific Nursery Rhyme RP.) 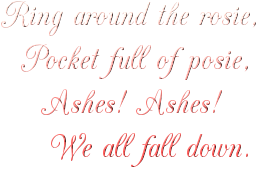 ❁ A Story Waiting To Be Told. ❁
Nursery rhymes originate all over the world, and they are most famous for entertaining the souls of little children as they sing along to their favorite Nursery Rhyme.
Ever heard of Jack and Jill?
Mary, Mary, Quite Contrary?
Three Blind Mice?
When these children grow up, they soon come to learn that the Nursery Rhymes they used to sing as a child were not all they were meant to be.
There is a hidden story behind a good amount of these famous nursery rhymes, and some are just waiting to be found. Those that know the true facade of these rhymes create such brilliant images of fearsome morbidity.

These nursery rhymes all come from one place.
Eleanor Goose's Nursery, or she would like to be called, "Mother Goose."
Her nursery houses each and every child rhyme out there. And YOU, are one of them. But, who are you exactly? Are you Mary? Jack? Jill? The Rock-A-Bye Baby?
What is your story?
These morbid nursery rhymes contain some of the most mental characters. Do not fret, you are one of them. Your responsibility is to keep children happy with your story.
You have a purpose. A job, a task, an objective.

Will you choose to accept who you are as a Nursery Rhyme? Or will you be able to escape the wrath of Mother Goose's Nursery and claim your right to rewrite your story for the sanity of the children.
Always do it for the children.
That's your job, Gooseling.

❁ A Certain Kind Of Plot. ❁
You are a nursery rhyme character, and your job contains a couple of objectives. It's your choice on what to do.

1. Keep your story safe from the other Nursery Rhymes. (This is very vague, but it'll get there.)
♦ MANDATORY. ♦

2. Accept your fate as one of the Nursery Rhymes with a creepy meaning behind it's innocent exterior and be feared by the children who grow up to find out your creepy tale. (This is probably not for the best.)

3. Escape Mother Goose's Nursery and rewrite your story for the betterment of innocence and things of that nature. (Again, pretty vague.)

❁ This RP will probably make you search around a bit for Nursery Rhymes. Their backstory is all up to your creativity once you figure out the meaning behind your chosen Nursery Rhyme. This is also kind of like a Once Upon A Time kind of deal. I just noticed that. ^^;❁
❁ If you have any questions, interest, or suggestions, PLEASE TELL ME. ❁​
Reactions: Ali and (deleted member)

Count me in love!
Reactions: Jihae

This looks interesting. I'll be looking forward to how this develops!
Reactions: Jihae
K

Ali said:
Count me in love!
Click to expand...

Chaikit said:
This looks interesting. I'll be looking forward to how this develops!
Click to expand...

Does this mean we can look into which characters we want? o.o

Kitsy said:
Does this mean we can look into which characters we want? o.o
Click to expand...

If you need any help with them,
Here, here, here, and here.
Are all links to some Nursery Rhymes. :D
BTW. MARY MARY QUITE CONTRARY IS TAKEN FOR VILLANIOUS PURPOSES.

Do we go with the canon backstortyof the riddle, or do we make our own?
Click to expand...

You can create your own backstory, just as long as it correlates to the Nursery Rhyme in itself.
(Ex. Ladybird, ladybird, Fly Away Home can be about a woman living during a terrible war, house was bombed/raided/set on fire manually/etc. only to find out that her siblings are all dead in consequence to the fire. She didn't know about this until the fire was put out, because she was hiding under a "baking pan". OR SOMETHING LIKE THAT.)


Ladybird, ladybird fly away home,
Your house is on fire and your children are gone,
All except one,
And her name is Ann,
And she hid under the baking pan.
(Person mentioned in CRAPPY ASS example is Ann in this case.)​

I would like to reserve "Baa, Baa, Black Sheep" then. :)
Reactions: Jihae
K

I CLAIM MISS MARY MACK... Unless I find someone more interesting. o.o BUT I WANTS IT FOR NOW.
Reactions: Jihae

Heeeyy, what about the little match girl? Or is she not fairy tale Nursery rhyme enough?
Last edited by a moderator: Aug 11, 2015

Kitsy said:
Heeeyy, what about the little match girl? Or is she not fairy tale Nursery rhyme enough?
Click to expand...

Nursery Rhymes are usually very small and simple. I think that the Little Match Girl is more long in a sense that it's a short story rather than a small passage.
Show hidden low quality content