[size=+1]Here's a fun challenge to get your creative juices flowing. 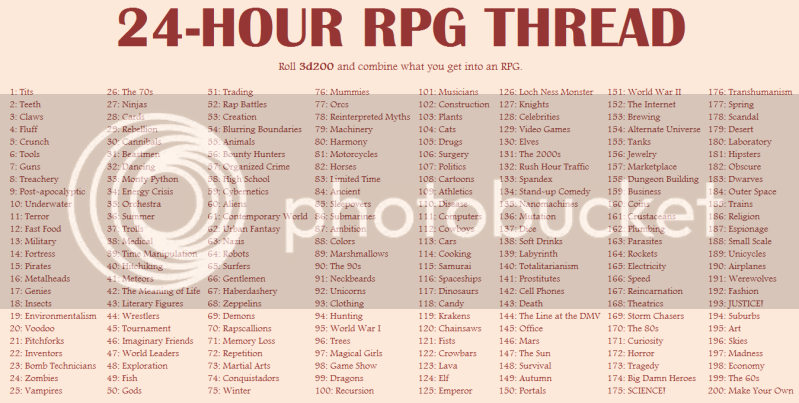 ...and from the three results you get on the image see what sort of plot you can concoct.

GET THOSE BUNNIES BREWING, DAMMIT.[/size]​
R


The doors shut behind you, and the huge fans on the wall begin turning as you find yourself sprayed with a soft mist. It is a moment before the inner doors open. The suited gent you are following pulls on a white overcoat and bids you to do the same before leading you into an office with three identical white coated men and three people you have never met before, all of whom seem to have just entered from various doors. You are directed to sit. All four of the identical men leave, and suddenly you find yourself alone with the other three. Silence stretches on for a moment, and then the woman enters.

She is wearing a stylish suit, and hands you each a folder. "You are the best in your fields. You are top amongst the world's military, and I need you to listen and suspend all disbelief until the presentation finishes.

"Years ago, in the 1970's, hunters were determined to capture a creature of great legend. They travelled to retrieve the monster, but killed it in the process. Unfortunately, this creature was more than mere beast. It lived in a lake that has been the source of many top secret investigations. You see, the monster that lived within was tied directly to the heart of our solar system and was a user of magicks most impressive. She, the Loch Ness Monster, was the keeper of a stone of great power. This stone can control the sun and all that orbits it. But though we have searched for the stone, we cannot find it. The recent rash of solar flares makes us think we are running out of time. Either it has been stolen, or well hidden, but we must find it! And if we can't in this time, we have to in that one. Travel back through time, find the Sun Stone, and bring it back to us!"

You play a super soldier, spy, scientist, or engineer. You are one of the best in the world, and are about to take on the adventure of a lifetime. The world depends on it, but can you make it through without destroying your own present in the past? And will you find the Sun Stone?

BREW ME SOME BUNNIES, PEOPLE.
S

November 1944; an American submarine is tasked with sinking an aircraft carrier belonging to the enemy country of Japan.
Between the advanced weaponry systems they have aboard, and the three secret weapons that Project C.A.T. had given them, this operation should have gone off without a hitch; after all, the enemy would have never seen the use of genetically altered teenage girls as weapons to be, in any way, a viable option.

Little did they know that this research had made it's way into enemy hands, and the scientists of the Axis powers were prepared to take this war to the next level using children as weapons.

Meaning of life, hitchhiking, and urban fantasy.
Had I rolled 175 for science at the end I could have just copied Douglas Adams work XD

He continued to run with all his might, although he was sure no one had seen him. How he managed to escape unnoticed was beyond him. However, he knew he didn't have long, and he had to act quickly. People had to know about this. He had is laptop in bag, and a list of e-mails for people who had subscribed to his recent scientific newsletter. But first, he had to get as far away from that facility as possible. They would already be scouring the area looking for him. As he made it to the nearest road, he saw a car driving around the corner, and quickly jutted out his thumb as he had seen hitchhikers do in several movies. With a sigh a relief, he watched as the vehicle began to decelerate and eventually come to a stop. The driver rolled down the automatic window and smiled warmly at him "where too buddy? I'm heading to new York city". He looked at the driver. New York city seemed as fine as anywhere. "What a coincidence, That's exactly where I'm headed" trying to remain as calm as he possibly could. With a final look over his shoulder, he hopped into the mans car. As the vehicle began to move, he pulled his laptop out. Using the wireless internet card, he typed up and sent four e-mails from names he'd picked of the list from an alternate, secrete e-mail. The people where ones he decided where curious enough, and capable enough to use this information. And four people, who where localized in New York City, where he had held many conferences in the past. "This is Dr. Edward Thomas. I don't have much time. Even now powerful men have begun a search for me. I will not live to see the end of the week. Please listen, tomorrow at 2p.m. I need you meet me at (*random location*), it is urgent. Nothing we know is true. I have discovered something that changes our very existence. Our very meaning. I need your help desperately.".

The 4 characters arrive at the mentioned location only to find the Dr. dead. Appearances suggest a mugging attempt that went wrong, but after the E-mail they had received, the characters are skeptical. After a little sleuthing before calling the cops, they discover a flash drive that appeared to be thrown during a chase. After speaking with the cops, they eventually search the contents of the flash drive and discover research on a secret company, but are quickly ambushed by a man with supernatural strength. The course of the game consist of the 4 characters trying to unravel the mystery that the late doctor had uncovered, while running for their lives from some shadowy organization that somehow defies the laws of reality. An organization that has a secrete so large, it may just tie into the very meaning of life itself.