The Price of Vanity

Fashion has so many damned meanings, it's ridiculous. D: But I like to think of fashion as outer personality. Because a first impression makes such a huge impact, how you dress should reflect how you want people to know you!

How does YOUR current fashion reflect you?

How much are you willing to spend for the sake of "being fashionable"?

Where do you think the line is between expressing yourself through fashion and just getting plain ridiculous?

My style and dress sense is an abomination before God.

My entire collection of modern day clothing comes from Goodwill. Proves how much I really care about popular fashions. I wear surplus military clothing as well. It's better suited to the elements around here during winter and no one questions why I wear it.

My style is what is comfortable and practical.

I have NO need for skirts usually, so I don't wear them.

The only thing I really take interest in is boots.

In short. I don't give a rats ass for fashion really ^.^
K

@TK Skirts are only good for easy acess

Me....I'm usually in my don't give a shit attire, though If I actually feel the need I can go Collard shirt and slacks.

...LET'S GET THIS SHIT MOTHERFUCKIN' STRAIGHT UP IN THIS BITCH.

Suckas need to disassociate "fashion" from "trend". And you know, fashion IS more than just "clothes". Goddamnit, I'm gonna quote the Nigel character from that horrid movie, "The Devil Wears Prada" wherein he likened the clothes designed by fashion designers as "art you live your life in".

OOOH, YEAH I SAID IT. FASHION IS ART, ASSHOLES.

Motherfuckers may not be into Giorgio Armani, Michael Kors or Diane von Furstenberg but I bet you they look at shit from Thierry Mugler, Alexander McQueen or Jeremy Scott and go, "Yeah they're cool!" because their styles aren't "pretty". Just because in high school a gaggle of bitches harassed you for not wearing the same brand of acid wash jeans they were wearing shouldn't have soured you from wearing nice clothes because those jerks were using fashion as a status marker, not as an expression of self. Speaking of which, "nice" clothes or having a "nice" style doesn't mean you get your underwear at $35 a pop.

My GOD it pisses me off that people think they have to give an arm and a leg to afford "nice" clothes. Bitches, dressing to compliment your body type goes in a loooooooooong way to looking nice in the clothes you're in. Knowing and being OKAY with what you find attractive in terms of clothes boosts you further along down that path and... excuse me as my eye twitching spasm passes, motherfuckers the excuse of "I wear what's comfortable" in lieu of telling the truth of, "I don't want to dress too nice because I don't want to be seen as being into fashion because those fashionable people are horrible and stupid and shallow and dumb and conceited and I don't want ANYONE to think I'm like them." bullshit is getting tired like my arm after a day in the Slap-a-Bitch workshop. Shit, I am tired of that stubborn Ugly Duckling fuckery. Waaah, I'm gonna wallow and marinate in my insistence on being "ugly" because I'm gonna stick it to The (Fashion) Man! And that shit isn't related to bonafide subculture fashion-- that is an entirely different monster.

One mooooooooore thing, remember fashion is art. That shit extends to fashion designers using their medium as their own artistic expressions so all that "crazy" shit you seeing being walked down the runway? Doesn't fucking mean you wear that shit out for everyday street wear, fools! P.s. Most of that shit is haute couture, you need to get that shit tailored to your exact proportions and you take care of that shit like a human infant because it is most emphatically not like you can just get another one. (Pret-a-porter clothes is shit EVERYONE can wear and mishandle like a one dollar hooker.)

Perfectly tailored suits are a must, I absolutely adore ties.

However, around the house I'm perfectly comfortable in a t-shirt, shorts and sandals.
F

Totally in agreement with KooKoo. Fashion is very much an art, and it varies from culture to culture, country to country.

I wear the standard jeans and t-shirt. My shirts have images on them all the time, whether they are band tees, smart-ass words or just something nerdy. My shoes are always black... I own a pair of Airwalk brand converse shoes that I wore to my senior prom, I have black boots, and I have my black Tony Hawk shoes. All are plain, but symbolize something. :] And I...generally, just wear black. I have a wonderful black leather jacket, too. It gets a lot of compliments which I could really use, since I have little self confidence.

If I see something I must have, I'll usually buy it. Last time I did that is when I saw a Darth Vader tee at Hot Topic... I don't get those urges unless it's a really really rad shirt. When my closet gets too full, I'll just donate some of my older stuff to a thrift store. ^^ I don't like having an overstuffed wardrobe.
K

OLOL I could've just posted this.


Andy: *gulp* No… No... No, nuh-nothing’s-- you know just… both those belts look exactly the same to me. Y’know I’m still… learning about this stuff and uh… *chuckles nervously*


Miranda: This… stuff? Oh …okay. I see. You think this has nothing to do with you. You… go to your closet and you select , I don’t know—that lumpy blue sweater for instance because you’re trying to tell the world that you take yourself too seriously to care about what you put on your back. But… what you don’t know is that sweater is not just blue, it’s not turquoise, it’s not lapis it’s actually cerulean. And you’re also blithely unaware of the fact that in 2002 Oscar de la Renta did a collection of cerulean gowns and then I think it was Yves St. Laurent, wasn’t it, who showed cerulean military jackets—I think we need a jacket here. And then cerulean quickly showed up in the collections of 8 different designers. And then it, ah filtered down through the department stores and then trickled on down into some tragic Casual Corner where you no doubt fished it out of some clearance bin however that “blue” represents millions of dollars and countless jobs and it’ sort of… comical how you think that you’ve made a choice that exempts you from the fashion industry when in fact it was selected for you by the people in this room.


From a pile of stuff.
V

I wear black jeans, need them for work and I like them. T-shirt and often a black jacket and boots. My apparel says "Get within arms reach of me at your own risk."

As soon as you call it fashion its too far. I favor practicality and dark colours.
K 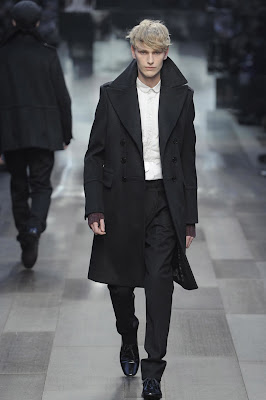 p.s. Lots of designers use practicality in their work-- not all of it is frou-frou frilly billies, you silly billy.
V

:B Taken from The Sartorialist, a blogger renowned for his photographs of fashionable people on the street.

Recently I've really been enjoying dressing nicely, so I reckon I do care about fashion. I would never sacrifice practicality for fashion though. If it's uncomfortable and costs too much, count me out. You might be surprised on what you can pull off with shirts and pants that cost under 10 or 20 dollars, respectively.
K

The desire for practicality is your own personal style but to think that that isn't "fashion" is silly because designers have made careers making nothing but practical, utilitarian design just as others have made theirs on flamboyancy and flair for the dramatic. Designers and regular people have a love cycle of influencing one another.

That shirt and jeans combo you just thought to put together? Might not just be purely from your mind or it could influence a local designer into incorporating it into their next collection which influences a major designer who happened to be there so on and so forth.

ROCK ON KOORI! YOU TELL THEM BITCHES LIKE IT IS!

I spent all of my childhood and teen years wearing hand-me-downs that were way too big, never fit right, and not age appropriate. t___t Which made Diana sad, because it never felt right and I didn't feel good wearing them. I think you should FEEL GOOD when you wear those clothes... So even if you're dressing to be practical, you should still consider how well the clothes fit and if you look good in them. Cause c'mon. You know you're on top of the world when you think you look badass. And you CAN rock a practical tshirt and jeans.

So anyway, Diana is all adult now with cash and a bigass closet. So I have been slooowly replacing all my old hand-down clothes that were never really "mine" with stuff I adore. >:D And because Diana is cheap as fuck, most of my purchases are from the discount and sale racks. I've been bringing home super sexy clothes for super cheap.

It's been nice feeling like a fashionista every time I step out of the house instead of another walmart hillbilly. D:
K

Plus, I've been walking around the Targets lately and I'm thinking how FUCKING SPOILED children are now that Target's stepped up their game and the clothes being offered are actually decent.

And Target's been doing a Designers for Target, where the likes of Jean Paul Gaultier, Proenza Schouler and Thakoon Panichgul who's dressed Michelle Obama have done pieces that are aesthetically pleasing and Target actually manages to price them affordably. And you know, Diana. I'm totally gonna hijack your thread with my bitching. :D

DONATING MEMBER
FOLKLORE MEMBER
My dress sense is often called 'Hipster-ish' but then what the fuck isn't these days?

Skinny jeans (but not the ball constrictingly-skinny ones; I may want to have children in the future), smart shirts, waistcoats and ties for me. Plus shoes of all descriptions because fuck yeah, shoes. I'm with Koori on this one; nothing wrong with wanting to look good in the way you dress. Makes you feel good about yourself, and what-not.
S