Original poster
you say that, but where is he =[
B 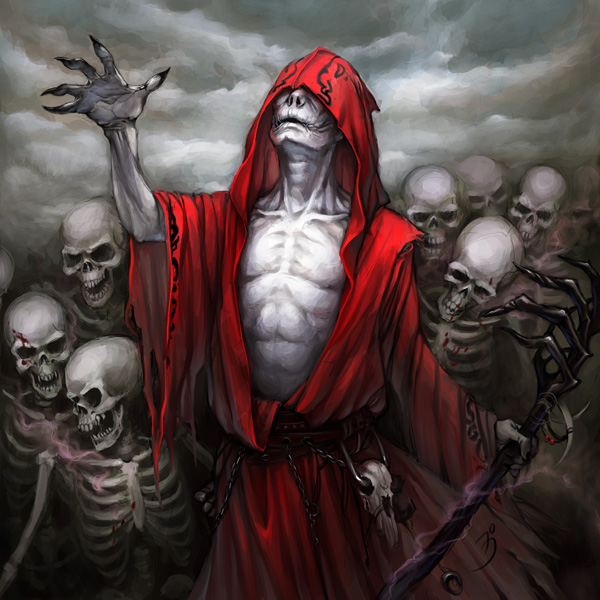 
Other info: Prefers to fight at a distance using summoned minions rather than face his opponents up close. Barely anyone, if anyone at all, remembers that he was once a human since it has been so long since the time of his death.

Once a human, Nathannael lived long enough to raise a family of his own only to have them murdered in the night along with himself. In the underworld his anger led to making a deal with high ranking demons despite the pleading of his family's spirits, blinded by rage he accepted the terms. In return for knowledge of necromancy and the chance at revenge he had to give the demons the sould of all who he killed. But the time came after his revenge that the truth was revealed: he was to continue killing and bringing those souls to the demons who granted him power. Trapped in the deal it went on for a hundred years until his knowledge and cunning brought him to a level beyond those who had him under their thumb. Using cursed items alongside spells, he sealed the demons one by one into various objects, thus freeing himself from their clutches.

Only now did he think of returning to the souls of his family to find that he could not. The magic he had used for so long robbed him of the right to join those dearest to him of the departed. After that he started to hate all of mankind and lost his love for it. Nathannael saw only evil in humanity and it had made him evil as well it seemed.
M

Original poster
Once again, Captain Kult died before the team named after him was formed... and 6 years before your ch was born.
C

Original poster
Blarg. I knew I missed something.
M

Original poster
It's fine now
B

Original poster
O.O So... When are we going to start this thing? ^^
B

Original poster
i was wondering the same thing O.o
B

Original poster
He's been gone for like a week! I need him or I'll explode! :O
B

Original poster
I want your FaceBook! Is that weird? O.O Am I all creepy stalker? lols
B

Original poster
not at all XD sure i'll PM you ;)
B

Original poster
Sweetness. :3 You are so adorable! How'd you know my favorite color was blue? :D lol
B

Original poster
huh umm ?!?! i rlly don't know what ur talking about did i say something related to the colour blue ?!?! lols but i'm not sure aout me but ur adorable lets hope the other memebers dont fel weird of our adorable statements =P
B

Original poster
You're wearing blue in your profile pic. lol :D And hopefully they don't. XD
B