Original poster
In Japan there is a remote town with two rival schools. Their students come from around the world. At these schools, you are among the elite, and you are also a master in some fighting style. The two schools are run by two families - the Kazegami and the Sakuramori.

The Kazegami:
Academically the students excell far above other schools. They have the best minds and have only chosen the best minds. The fighters are great tacticians and amongst the best fighters in the world. However, they are usually more agile and not amongst the strong.

The Sakuramori:
They are star athletes. They have decent grades, but are not as academically strong as the Kazegami. The athletes of the Sakuramori school are top in the world in their chosen sports. As fighters, they are stronger and just as fast as their rival school. However, to plan out a strategy is not their strongpoint, and is often their downfall.

The rival schools can challenge each other in the fighting arena. This is a death match between two students so it doesn't happen too often, but often enought due to the nature of the relationship between the two families.

The families, the Kazegami and the Sakuramori, have been blood rivals for nearly a century. The families have passed it down through the generations that the other family is no good. In the past there were fights in the arena nearly daily, each side trying to prove that they are the best.

This was originally played as a yuri, but does not have to be.
It is a love story.

THE STORY:
I'll go into more details about the story once I know what characters I'll have. 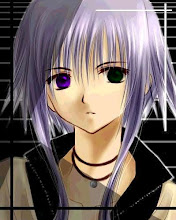 Hikaru has light, forest green eyes.
Normally wears loose jeans, tennis shoes, a white t-shirt, and a vest with her family crest over her left breast.

Personality: "Knight in Shining Armor" type of person. She never backs down from a fight, especially if she knows she can win. Can be considered a flirt but never actually does anything with anyone she flirts with. Loves horseback riding and archery, but her family sees them as ignoble activities so they are usually done in secret or through her martial arts training. Academics aren't one of her strongest points, but she is extraordinary at mathematics and languages.

History in brief: Hikaru is the oldest child in the Sakuramori family. Growing up, Hikaru was trained in boxing, taekwondo, karate, Shaolin kung fu, judo, jujutsu, aikido, wushu, gatka, and kendo to learn fighting styles of all kinds, although she has only mastered karate, aikido, and judo. She has two younger brothers, one age 17 and one age 15.

Jovi~ I will Play in this but I can't post my Character till later tonight ^^;

Original poster
Meh, only if you want. I was just too lazy to make a new person from our previous endeaver. And Hikaru never reached her full potential as a character. Besides, wasn't even sure you would want to play.

And that would be awesome, Varius. Just post when you can! ^^
K

Original poster
Well no offense man but I think I will sit this one out after reading everything. My apologies and good luck with the roleplay guys.
J

Original poster
You mean you didn't read everything before? How could you! *offended*

Original poster
Alright man, sorry I just have some problems with how the families are presented and the history between them then again I did hand over creative control over to you. Anyways, have a good time.
J

Original poster
Tried to simplify it a little based on what I read from your original idea. What do you want different? PM me. I'll see what I can do.

Hopefully the edits I made represent the original a lot better. Sorry for changing it too much for you, Kuro.
K

Original poster
Well actually may make another character, this time a male O_O One of the Kazegami but I'll be taking on a far more darker persona with him than I did with Yuki.
Show hidden low quality content
You must log in or register to reply here.
Share:
Reddit Pinterest Tumblr WhatsApp Email Share Link
Top Bottom