The Future rests on your Paws

Original poster
Along Time ago, when the earth and sky collided together to form mountains. A tribe of wolves reigned over all the world, a peaceful tribe known as the LunarHunters, roamed protecting the animals surrounding the earth. This tribe consisted of the Alpha's, the chief, healer, fortune teller, warriors, and elders. They lived to protect those of the weak. Until the chief, a wolf named Jodeci grew tired of the tribe's peacefulness and began killing off the wildlife in the area, hunting the deer down one by one, with a band of followers with the same beliefs as him. One by one they slaughtered the land of creatures, leaving the wolves of the tribe to fall into total anarchy.
The tribe members went to the Fortune Teller, Aya, asking her to pray to the gods for food. Aya refused, for she fortold that the wolf responcible was none other than her son, Jodeci. The Alpha's sentenced Jodeci to death, but jodeci had already tore into the mind of the tribe, telling them the lack of food was caused because the gods were punishing the Alpha's for they're indesency. One night, the warriors led the Alpha's into the woods and slaughtered them as a sacrifice to the gods. Jodeci saught out the oportunity to claim his way as Alpha over the tribe. Months came and gone and yet the animals never returned, the wolves became scarce as most died off from starvation, while the others became canibals to survive.
Aya who had been forced into exile for birthing such an evil beast created a poison asking the gods to destroy her son for she couldnt. Aya, the next morning placed the poison in the water of her son and watched as he licked evey last drop until his heart stopped and he passed. Aya and the remaining wolves of her tribe found that the animals flourished, the rivers, which were so barren, overflowed. The gods had answered Aya's prayer and sent the wolves their hope. Two new Alpha's were made and they created rules for the tribe, so that if the same problem happened again, the rules would be the stronghold of the tribe forever.

Today, the tribe grows strong, new pups are born and all follow the rules the Alpha's from the ancient times created. the tribe lives under a new name and a new Alpha Female who keeps the pack strong. The MountainTribe is their name and now its time for their journey to come into play.

[SPOILI]Food Rules:
Alpha/s eat first, under any curcumstances are you allowed to aproach the Alpha/s while they are eating.
Eating order:
1. Alpha/s
2. MoonTeller
3. SpiritSpeaker
4. Elders
5. Chief
6. Healer
7. Warriors.
If this order is broken, punishment will be two days without a meal.

Character Rules:
1. Alpha Female and MoonTeller will be played by me. If you want the posistion of alpha male, your charrie must win mine's heart. If you wish to be Chief or Healer PM ME and I'll reserve the postision for you.

2. I strongly Encourage Romance, wolves must have mates to be whole inside.

3. No God-Modding or you will be exiled and not allowed back in.

4. Only accepted charries can begin to Rp, if not accepted I will hunt you down and gut you like a fish! But please dont be childish and post without being accepted or you will be kicked out without question. If you want to rp that bad, send me a message, and I'll get to you.

5.Any and all problems will be dealt with by me, a rude person, someone killing your character without your permission etc. Send me a message, not meaning this: (so and so just used their charrie and killed mine without permission) in the roleplay. I'll ignore you and ask everyone else too, unless you send me a message so I can personally deal with the issue.

6.If your going to be gone for more than a week please tell me, so I can message people and tell them, your character will be gone. I dont want the exact date and time you'll be back, just a message to tell me, so that we dont involve your charrie and you come back the next day having a heart attack cause your confused. Pm me and I will send you a flashback or Re-Cap for you.
[/SPOILI]
Wolf Info Sheet:

Okay, thanks! are we role playing here or on another thread?
K

Original poster
Hi, is it okay if my wolves are loners that ask to join your pack? And are my chars okay? :)

Rank: Chief? Can they have a mate?

Personality: Akia is sweet, kind and loyal. She is always looking on the bright side, and is always willing to help someone out. She is intelligent and somewhat quiet, she dislikes conflict and will always act as a peacekeeper. She is quite strong and an excellent hunter and warrior, though she dosen't want to be one as she someday hopes to find a mate.

Other: Arrow is her brother

Personality: Arrow is caring and kind, though he is mistrusting so very few have seen this side to him. He is hard to get close to but once you do, you will not find a more loyal friend. He is overprotective of his sister Akia, as she is the only family he has left. He is intelligent, and a very strong agile warrior.

Other: Akia is his sister.
L 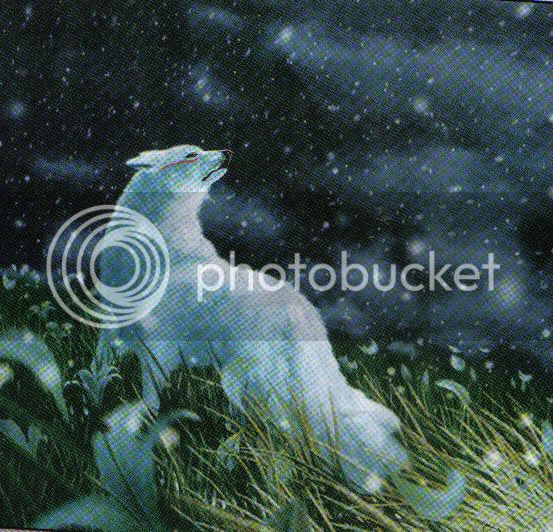 Name: Leucothea or Lou
Gender: Female
Rank: Moon Teller
Crush: N/A
Mate: N/A
Leucothea *meaning White Goddess* is the whitest wolf seen in the tribes. Legend says Leucothea, 'a wolf so white the heavens cannot compare, will lead the moon around under her paws and build a new tribe, one that can withstand anything.' Course it hasnt happened yet. Leucothea was born on the same beliefs, Leucothea feels connected to the Alpha as if they were connected. But its eminent for the legend says 'A white wolf born from the clouds, born from the very gods protecting the wolves' she doesnt believe it. Like Wrath she is hard to crack, often blanking out during conversation then running off into her den. A night, she roams alone and goes to a secret place, only she knows the importance. Leucothea speaks her mind most of the time, if she finds it unnessisary she wont spit it out intill a matter of importance. Lou is very emotional, making emotions her most prominent weakness, she mostly stays alone. As MoonTeller Lou is permitted to roam alone, though she likes to have a warrior assist her. Lou and NightShade get in arguments more often then the rises in the sky, Lou fortells of NightShade finding a mate and NightShade disagrees instantly, but Lou knows she will find that special wolf,as will Nightshade, only a matter of the gods. She's quite lazy and isnt concered with it.
More pictures: 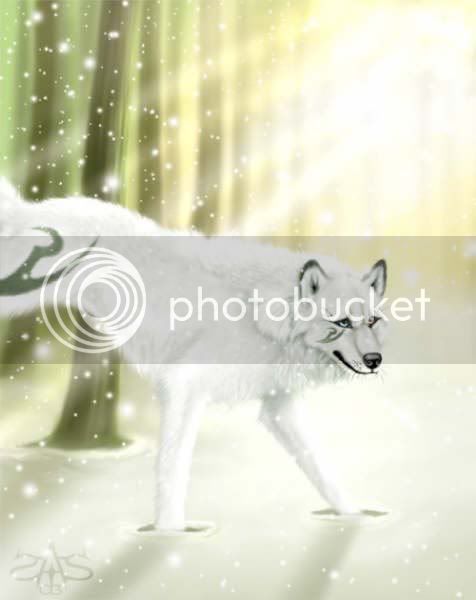 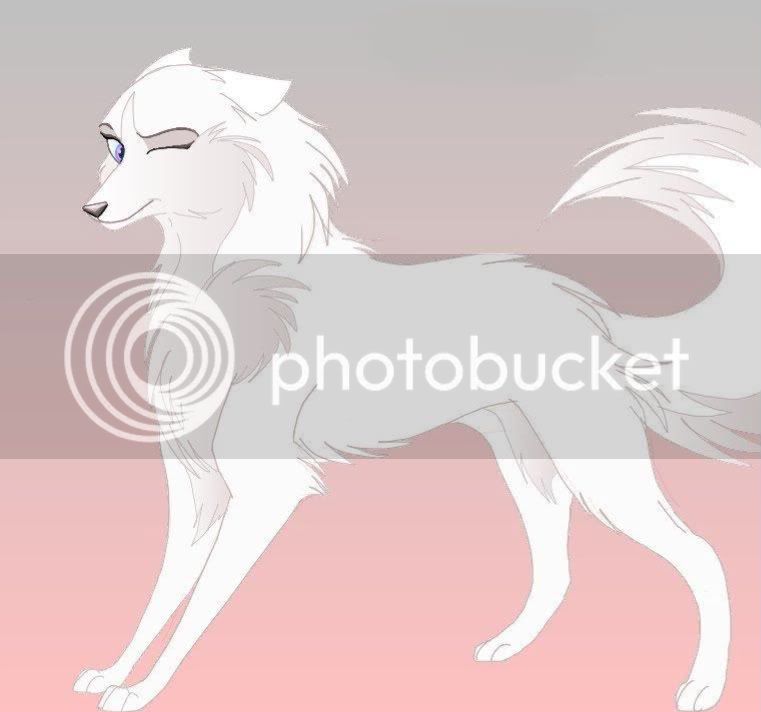 Original poster
Ah, I love wolf RPs~! Though I haven't been in one for 3 years.. Oh well. >:D -Cracks knuckles- I would bring back my greatest wolf charrie, Mib, but then again, she was a magical white wolf of mystery.. O_o;;