Original poster
The sky was a dark gray still, as it had been for the last week. Trent was carrying the large hiking backpack, just like usual. They were in search of an organized shelter within the city, but had no luck yet. There was word that the high school may have a survivors camp, but it was all the way across the city. It had taken them all week to make it there. Ana and Trent were finally approaching the school's road. The longer it had been from the explosion, the fewer people they saw. Either they were dying out quickly, or they were on the move east.

East is where they intended to head, but they needed to try and resupply first. Their feet sank into the ground of ash and would get stuck with each step. Their water supply was almost gone and all the current water was tainted with ash. It was cooling off day by day due to the lack of sun and was only supposed to become more and more cold. They really needed to resupply.

As they stepped onto the road leading to the high school, they could see a flame ahead. Somebody was there. Within minutes they were greeted by two people standing at the doors to the school. An elder man and woman. They greeted the kids and opened the door to the warmth of the inside. There were probably a couple dozen people here. Another man came up and assessed them then lead them to a set of bunk beds set up. He handed each a military packet of food. One read "Mashed potatoes and gravy" and the other "hamburger". Both were in tubes.

Setting their equipment down, Trent devoured his and offered to open Ana's. She declined and placed it in her small backpack, causing a worrisome glance from her older brother. 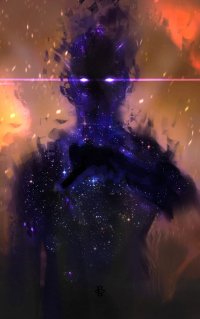 Damien had been on the road for six days, and was stuck on the side of the street, face wrapped in cloth to keep him from inhaling the falling ash. He was in the process of switching out the air filters he'd rigged up to keep the truck running. The filter was of course technically just a blanket that he'd tied on to cover the grates. It overheated pretty quickly, so it was slow running, but he was making it, and he was also making some progress plowing the ash off of the road, something that the government had clearly failed to maintain. It was slow work, but it needed to be done, not to mention that it would make things so much easier on his return trip if he only had to clear a smaller amount of ash to drive out.

All things considered, his biggest issue was that he was running low on fuel, and water. He'd managed to get food, but that wasn't as much of a concern given the situation. He was close to his destination though, he only hoped that his friend Ana was alright. He lost contact with her shortly after the eruption, and as she was the reason he was in the united states, he felt obligated to make sure she was safe. Not to mention that she was his best friend.

Finally, the new blanket was rigged up and Damien was ready to go. Only another thirty miles left.
S

Original poster
Matthew Stumbled along the road the chemicals and ash giving him a hard time, he was wearing his sky mask and goggles to avoid inhaling anything toxic. He studied his surroundings closely but had a hard time seeing anything of use so he continued towards the school he had heard of. He had only been traveling for 2 days since he was already hanging out near town and was staying in the little motel until they were low on supplies. Matthew at first was with a group but the others had given up and too shelter elsewhere. He was all alone once again. He powered on towards the school and spotted a little house with a broken wall he could stay at if he needed to. Matthew checked his watch and decided to stay the night given it was getting late.

Matthew entered the building and spotted a room untouched by the ash at least, he found some wood and made a small fire to cook some food from his canned goods. The place was cleaned already for supplies so he just went to sleep in his sleeping bag that was apart of his bag pack set. He decided to wake up early the next day and set up the wind up clock he had with him.
E

Original poster
"What the fuck is this radio goin' on about?"

Pyrrha Woodson silently listened to all the rowdy people in her eight passenger seat car - all random strangers in need of help - as she drove back to the city she had stopped at before in hopes of escaping the awful smog outside. The blonde bearded man sitting in shotgun decided to turn the radio on after his wife in the back insisted that they know what is going on outside.

"Officials are advising all citizens in the area to stay inside until-" There was static feed in between some of her words, but there was a major one right after the emergency announcement. "Citizens of Wyoming and neighboring states are in disarray as the government tries to settle the-"

Suddenly, there was silence. No static feed, no stammering words of a reporter behind a studio mic. No one said anything until a child in the back started to cry. While a woman in the back tried to calm the child, the man in the front started to punch some of the buttons near the radio, but everything proved futile.

"Shit!" He hit the dashboard in a fit of anger, turning his head towards the perilous sky above their heads. Digging his hand in one of his pockets, he grabbed his smartphone and tried to fumble around with it. "No connection on this damn thing, either."

Rustling was heard behind Pyrrha's seat. "There hasn't been any network on any of our smartgear for a while now. We were lucky to have the radio work for as long as it did."

"Mom, I'm scared," The young boy who started crying earlier whispered, slightly muffled as he buried his face in his mother's shirt. She rocked him back and forth, trying to convince him that everything will be alright despite her face saying otherwise.

The redhead driving frowned at the lack of communication to the world outside of this car. What is going on? Why is there so much debris in the air that wasn't there a few hours ago? Questions circled her head as she kept her eyes glued to the mixture of roads and non-roads, going through strange paths that she remembered accurately her GPS had told her before when it was working.
Show hidden low quality content