The 13th Hour - A Tale of Creation, Terror and Destruction 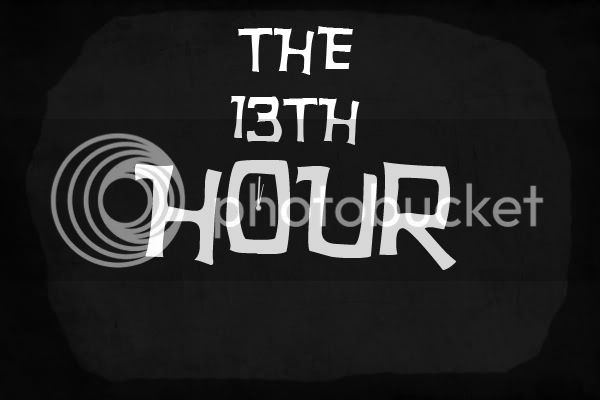 Just in case the logo doesn't immediately scream "EARLY DAYS, LADIES AND GENTLEMEN" to you, I'll say right now that this is a real work in progress I'm putting together right now. I just wanted to see what Iwaku thought before I went any further.

Stemming from an idea I had about interacting with the characters and beings we create, and also from a game Asmo thought of running a while back where folk played characters based on books, 'The 13th Hour' is going to be a Jump In RP where players take the role of a creative soul (artist, musician, writer etc.) who is unwillingly drawn into the 13th hour, a period of time in which the conventional world stops and our creations come to life.

Within the 13th hour, characters (known as the Creators) have the power to create and destroy, but they are in terrible danger despite this ability; the Created are often aggressive towards their makers, and this aggression can shift into violence. With no escape from the 13th hour until it has run it's course (which can be longer or shorter than a conventional hour, because life's a bitch like that), the Created are forced to navigate their way across a shifting environment which can become life-threatening at the drop of a bloody hat.

As I've said, it's pretty early days for this game; I'm still working out what experiencing the 13th hour would be like and what the Created look like/act/etc., but the fun of Jump Ins is we get to work this shit out together.