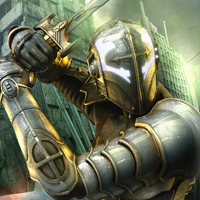 Genres
Fantasy, magical, horror, romance (as more of a plot/sub-genre. I tend to be more focused on anything else other than romance. I can go from "kissy-kissy" to "sexy sex"), action-adventure, fandom, steampunk.

(This roleplay is *heavily* video-game based. It's basically all it is. XD) Ever wondered what life inside the world of video games would be like? Look no further! This RP is all about gaming characters living their virtual lifes!
A little about this world- It is very much like Wreck it Ralph. The only differences are that the arcade isn't the home of these characters, and a computer that hangs out in the area where characters travel to others game are the games' God.
The plot- The "God" mysteriously goes on vacation, and his son takes over. A few video game characters get suspicious when the son acts more of a dictator than he was programmed to be. So, it's up to those virtual people to figure out what the hell is going on!
Show hidden low quality content