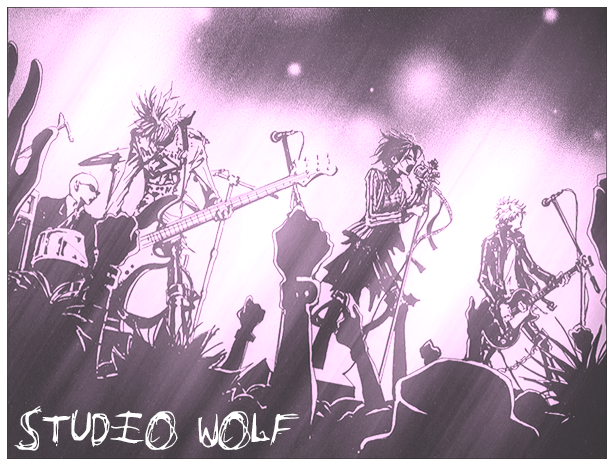 Studio Wolf is a struggling production company hoping to debut the next generation of pop and rockstars! Up until now they've never had success (to be honest most of their talent is kind of terrible), but finally one of their bands has caught on with a hot single! Solitude Winter is sure to be the best rock band yet.

During it's debut celebration party, some drugged up manager mistook three girls as the famously mediocre pop band CHRONICLE - one of which ended up being Youtube sensation Serendipity Starlight, the other actually being the super famous WING. (Of course the third is a total nobody that is now a mochi meme all over the internet. The Studio was purchased that night to cover up WING's true identity, especially after the mishandled arrests in the suspicion of Chronicle's murder?! And since then every time Studio Wolf hosts a party at the building, something TERRIBLE has happened!

Many believe the Studio Wolf building must be cursed, but that hasn't stopped them from trying to promote the BEST musical talent in all of Japan. (It just means they need to host their events elsewhere!) Come by the Cherry Blossom Festival (SPONSORED BY STUDIO WOLF) to see some of your favorite stars and enjoy in the spring festivities!

WHAT: Set in the Macho Cafe universe this is an "anime" style roleplay. You can play some of the talent Studio Wolf, an employee, an employee's family member, or a guest to the studio there for a "tour of the remolded biz"! Do not play a supernatural character!

WHERE: Join us in the STUDIO WOLF chat room. You'll find the link to our chats in the CHAT tab when it's time to play.

HOW: This is a SOCIAL SETTING WITH IMPROVISATIONAL GAME MASTERING. That means the object of this roleplay is to interact with other characters, and from those interactions I will create a plot and story around you. There may be action moments, where strange events will happen and your characters will have to work together to resolve it. With this ChaRP "lol random" behaviors are discouraged -- what your character says and does will have in game consequences, so choose wisely!

Do not take events in the roleplay personally or assume that bad reactions are because they think you/your character sucks. Everyone is playing a character and reacting to things as their character would!
Last edited: Mar 17, 2022
Show hidden low quality content
You must log in or register to reply here.
Share:
Reddit Pinterest Tumblr WhatsApp Email Share Link
Top Bottom