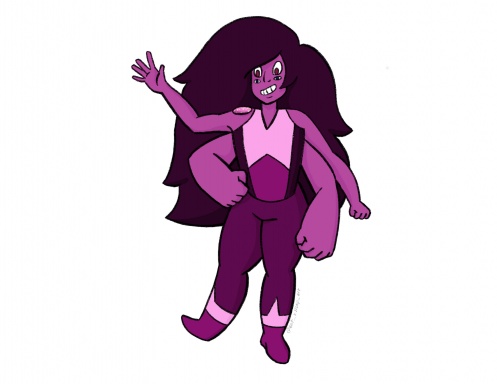 The Hero Of Time

My idea so far.


The diamonds, they ruled over the gems for millions of years, their hand strict and direct. The gems below them did as they were told, and only existed to serve and finish their purpose, any who rebelled were quickly shattered and shown to the others as a warning; proving what disobeying would provide. This was until Pink Diamond broke away from her sisters, living among humans and eventually giving birth to a son; Steven.

Steven united the Diamonds, even showing them the wonders of Humans. He taught them to be kinder, sweeter, and gentle.

Everything was going great, even after the events of Spinel.

However on the far reach of the galaxy, two new and frightful being emerged. One was a evil, and twisted Espier that roamed the planets. Organics dying upon its contact, and materials decaying upon its sight. Eventually the creature met a Gem, seeing these powerful and fearful creatures turned weak and defenseless; the creature changed its form into what would be known as Black Diamond.

Quickly the Espier destroyed planets, and Gems leading a graveyard on its way to Homeworld. Upon its arrival the Espier destroyed all warp pads, and nearly killed half the planet. Almost all its population lied shattered, before it was met with Steven and the Crystal Gems. They were were no match for a malevolent and violent creature, quickly it poofed the Gems, and fought against the three Diamonds and Steven. The Diamonds nearly managed to wound the Espier, but were eventually shattered, while Steven was attacked and killed. The remains of the Diamonds were taken, and Stevens Gem was removed. Quickly the creature left the planet, fading into stories while sending the Gems to near exaction.

On Earth, a small force of Gems remained; while pockets of them hide among other planets. The force left to protect Earth went by The Crystal Gems; and was lead by Garnet.

However, one day a new and strange creature arrived to the Earth; something even Garnet did not see pass. It met with the Crystal Gems, claiming it was from another Galaxy; and that it was magical and able to stop the Genocide happening to the Gems. It asked for their help, and in good faith it placed multiple shattered Gems on the ground before it. A symbol glowed on its hand as it raised it forth, quickly the shattered Gem pieces reunited; blending back together until the returned to normal. Slowly one by one did a Gem take a physical form, returning to life.

I kinda want the RP to be round based, and adapt to everyone choices. Kinda want some action and character development, and storytelling.

I basically want this to be a sandbox RP, with a somewhat decent mainplot.