Souls of the Hunted OOC//Sign-up

Original poster
Ok so basically a long time ago, 10 children were hunted down by an ancient society of Demon worshipers. They were powerfull because of their ability to project a form of enhanced abilitys. They also were granted a sacred weapon that they believed a demon used. These were called Kenvai's. They are powerful weapons that could rip part of your soul out of you and even the whole thing if hit in the right spot. They Demon Worshipers or the DW followed the 10 children. 5 of them were brothers while the other 5 were sisters. They were of pure soul and if the DW could take at least 6 of them they could free the Demons they worshipped. they were sucessful and killed 3 of the sisters and 3 of the brothers. As the demons were freed they destroyed whatever they could and feasted on the souls of their victims. The DW crept into the shadows until they ultimately disapeared. The 2 sisters and the 2 brothers, mated with each other. They had 8 children that all branched off to grow their family tree. The descendants of these children formed a demon hunting team called the Seraki. Seraki had found the Kenvai that the DW had and passed them around to the members of Seraki. They also found how to channel their chi through their weapons and their hands and feet. They created the art of Craftic, Chanelling ur chi into blast or forms. Now in 2009, demons have plagued society and have revived DW. The demons now plague man kind and the only thing apposing them is Seraki.
H

Original poster
Seraki Chara Sheet (unlimited) Name: Age: (7+) Craftic signature move (like what is ur special one that only u can use): Bio Personality Kenvai (what type of weapon is it); Pic:
H

Original poster
Basic Craftic powers Chi Blast-sends a beam of chi Craftic Slash: Sends a slash from your weapon as you swing it Craftic Orb: Creates a chi orb around the person Craftic Sheild: Creates a sheild of chi on your arm and last a few blows Craftic Heal: Heals you or target The races are basic demons, like Werewolves,imps, fallen angels and stuff like that. Crow demons, spider demons etc. (This is my first rp on this site and i have a question, How do i caterogize this as a fantasy rp? I didn't understand the how to...)

When you start a new topic, you can choose a "Prefix". That will mark the thread as what what want! (Edit: Edit the Topic Title when you edit the thread!)

I also recommend hitting enter to add some spaces between lines and paragraphs in the info! It'll help people read it the posts! <3

The plot looks very interesting! I'll see if I can nudge some players this way! >:]
P 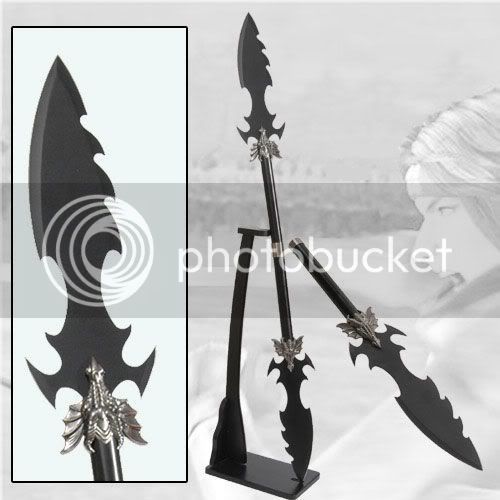 [/align]
Seperates in the middle where a cord keeps both pieces together. Turns the lance from just a stabbing weapon into a lashing one.

Ability: Although many stories have been told about vampires there are only a few that are true. For instance, they can only come out at night because the sun harms them. Indeed the sun harms them but a cloudy day would work just fine for him. Holy items do hurt a vampire because of the power it is imbued with. Derik also needs blood to keep him alive. Finally the last truth behind the stories is the regeneration capabilities of these creatures. If not entirely subdued in one go their bodies regenerate quicker than a humans and they can survive much more than one too. Although the regenerative capabilities are slowed in battle, an escape is necessary to survive.

Derik’s other talent is mastery in the double headed lance. His attacks are vicious and continuous, a dangerous combination. He can empower his Kenvai with his soul and the energy that comes with it.

Personality: He is a tactical powerhouse. His quick wit in battle has saved him many times and this applies to how he treats others as well. He likes having people on his side and despises those that are against him. He does not like to admit defeat but knows when he is beaten. He rules his own unit with an iron fist but takes their physical condition into consideration as well. He is almost respectable in a way.

History: When the demons were unleashed upon the world so came Derik. His younger years on the battlefield filled him with the knowledge he needs today. The weapon he had come most to adore was the lance. He inherited one from his father who died years before. With nobody to guide his actions further he took the weapon and put it to his own use.

Soon he learned honor in the battlefield and leadership. All these traits made him quite the feared opponent and an honorable commander. However, he does have a few flaws like anyone else. He takes fancy to some human and demon women, loves a good battle, and almost has his own soul although others tell him he’s ruthless. This leaves him caught in the middle sometimes without an answer. In the end instincts take over.

Now Derik fights just to see if there is someone out there like him.[/bg]
H

Original poster
Thanks for joining :p! You are accepted

Name: Kai Nakasuma
Age: (7+) 17
Craftic signature move (like what is ur special one that only u can use): Eternal Craftic Dragon-Sends a chi dragon at opponet, Leaves Kai with little energy.
Bio Kai was born to a family of Seraki. He was trained at a young age but hated killing demons. When he turned 7 his family was killed by the DW and he was sent to his parents best friend to be trained and raised there. He swore that he would kill any demons he got his hands on. As he turned 15 he was given the role of sensei to 2 younger Seraki members
Personality: Persistent, perverted, strong, and energetic but he has a dark killing side Kenvai (what type of weapon is it); A giant sword (Ichigo big) that only he and a select few can wield
Pic: 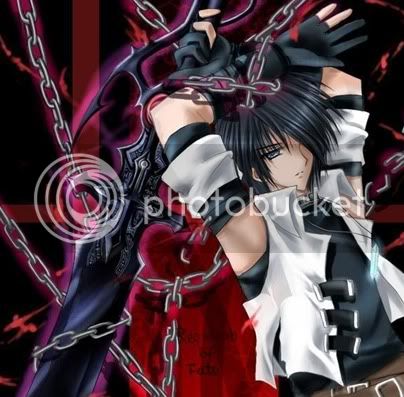 Original poster
Seraki Character Sheet
Name: Renji Yoshimatsu
Age:17
Craftic signature move: Shining Form! Renji taps into the power of his Chi for a boost in speed, strength, and stamina. May cause some dramatic wind.
Bio Renji was, notably, not born a Seraki. Aside from the bits and pieces of the Seraki bloodline that have dissimilated into the population at large, his parents were normal. They were killed pretty early into his young life by, you guessed it, demons, so he got adopted and trained to fight demons.

Compared to the straight-bloodline kids, he failed miserably. Yet Renji does have some notable things about him. Strangely, it seems that he can survive stupid amounts of damage, probably from a long history of getting hit with stupid amounts of damage. Furthermore, his raw determination to be capable has earned him a teacher. It's generally thought among higher officers that Renji could prove to be obscenely useful-if a normal kid can learn how to slay demons on par with a inheritor of the Seraki bloodline, then that means there are almost 6 billion potential recruits.
Personality: "It's best to be straightforward"

Renji is hot-headed and rushes into danger headlong. He's a bright and happy young person who enjoys playing videogames, skating, and when he finds them, punching demons in the face. Life is a game to him, one that consists of chilling out and fighting.

Kenvai Renji has not had a sufficient track record to qualify for a true Kenvai. This is mostly due to his long streak of getting his ass kicked.

Instead, Renji has recieved two rings. They were made from shattered pieces of another Seraki's Kenvai, which was broken as he was betrayed and killed. The pieces were all that remained, and reforged into two rings- one a simple band of something akin to silver, the other of gold. They pack considerably less punch than a normal Kenvai, but are still far more effective than the .22 pistol and combat knife he carries.
Pic:

So yeah, RENJI! He's probably one of Kai's students. I think the other might be a girl, just so that we get to have that foil, and show off that somewhat comedic side of Kai's personality.
D

Appearance: A somewhat tall man with black hair and fully black eyes. He generally wears bespoke black tailcoats, trousers, ties, vests and cufflinks from the early 1800s and sunglasses that are somewhat more recently. He also wears a signet ring that appears to have been carven of obsidian. He carries a cane of lignum vitae whenever he can.

Kenvai: A thin four foot long sword with a basket hilt made of a metal that looks vaguely chromium like with a hilt bound in black leather and silver wire and an amethyst pommel. It has significant cutting power and is very light and thus quick if somewhat lacking in blocking ability.

Ability: Azazel has extraordinary and instinctual combat and tactical abilities even with weapons and in situations he has never encountered before.

Bio: Azazel is of course not the original Azazel who was far older and something of a prince among demons. In the 1800s the original Azazel was hunted down by an elite team of Seraki. They left him dying in Prague. When they left the original Azazel imbued what power he could into his signet ring and left it. A mortal man in his twenties found the ring and, inspired a strange impulse put it on. He slowly discovered that he did not age and had a natural genius for weapons of any sort. He strove to discover what exactly the ring had done to him and eventually did when he encountered other demons. Since then he has acted as a mercenary and hedonist, traveling the world and enjoying whatever struck his fancy. And the wars of course.

Personality: Mad, bad and dangerous to know. Azazel throws himself into almost suicidal situations in search of a thrill. He is often overcome with cynicism and arrogance but also holds to a particular and seemingly randomly chosen set of principles that he will not break. He holds no particular enmity to the Seraki and indeed feels little kinship with demons in general.
H

Original poster
Accepted, you all are a good to go. Now we need one or two more people
N