Slave to Their Instincts OOC (R for violence)

As the night sky drew to a close, and the first rays of the morning light scratched and clawed its way into view, it uncovered a mangled and bloody body of a large beast. a collar leaying beside it, appearing to be torn from its neck. The beast was later found to be a rare animal, a mix of a large wildcat and a bear, the owner grieved horribly, saying that, amazingly, the beast had been capable of speech and was not just a pet, it was his best friend.

This is not the first or last case. There was a small parakeet/door mouse gryphon found two nights before. It was a small little thing, and some cruel person had not just killed it, but crushed its small skull under its foot.

The only thing these odd animals have in common, is the fact that all the animals killed so far were created by a woman named Alezia Nocturne

Her life's work has been to find a way to combine animals. At first, it was just for certain aspects, but then it started to have a goal. The beast that was discovered, the one that was somehow capable of speech, was what she had been striving for.

The thing is, even with speech, some animals just refused to speak. But as the process continued, they became more tame. More.... human-like in nature.

They were sold as companions.

Now they are being hunted down and slaughtered. And no one can figure out why.

The only lead is that a prophecy was foretold that when the right combination of animals were killed, the gates of paradise would open.
********

You can play as an animal (GASP) or as a human-like species. (Like elves, and so on)

Name:
Species:
Age:
Height:
Weight:
Appearance:
Personality:
Name of pets: (If you own any)
History:

You can up to three characters.

Name: Silia Narzak
Species: Human
Age: 23
Height: 6'2
Weight: 164
Appearance: View attachment 954
Personality: Keeps to himself. Is warm and kindhearted once you get to know him, but can be very abrasive.
Name of pets: Naru and Niru.
History:

Name: Naru
Species: Owl/Snow leopard
Age: 4
Height: 4'5 at the shoulder (below the wing at rest)
Weight: 234 lbs
Appearance: View attachment 955
Temperament/Personality: Calm but aloof
Name of owner: Silia Narsak
History: Was created and then adopted into a family. You'd think that was the end of story, but the kids disliked Naru and the ended up returning the gryphon. It was then personally given to Narsak

Awww, no one thinking of joining?
R

Good timing, I was going to close it, but if you're interested, I'll start looking for more players again.
D

Is this still alive?

I'll give it one more week.
D

I'll join if it lives
F

Personality:
Although her appearance comes off as a bit terrifying, she's actually very sweet. She doesn't talk much unless she's interested or needs to. Cathy rarely shows fear, especially to animals.
Name of pet:
Zero
History:
A college drop out that spends her time in a floral shop, owned by her aunt. When she's not at work earning money, she is at a cottage in the forest that she rents so Zero can have wide spaces to frolic and hunt. Ever since she found the pup, she was devoted to raising him so he could go out into the wild on his own. He has not left her yet and she heard about the hunt for hybrids, therefore she is protecting him in solitude with hopes it will all end. Cathy was always a lonely girl; she considers Zero the best thing that's ever happened to her.

Name:
Zero
Species:
Wolf and Tiger
Age:
4 years
Height:
When on all fours, he is 2 and a half feet tall
Weight:
145 lbs.
Appearance: 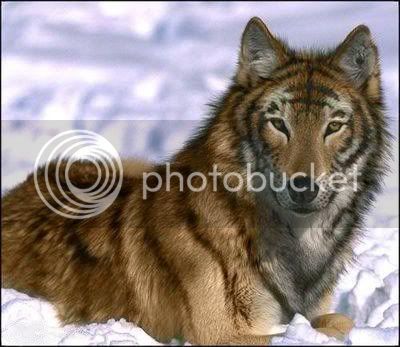 Temperament/Personality:
Protective and energetic, however bashful and quiet around new people as long as they're not threats. He prefers not to socialize with other animals.
Name of owner:
Cathy
History:
Zero was a 'failed experiment'. They were aiming for a creature that would grow to be larger, but he is mainly a wolf simply with tiger fur and a few tiger instincts. He was released into the wild as a pup. Cathy found him helpless in the wild; he allowed her to help him even though he was afraid and tried to bite her arm off. He is now very loyal to his human and will do anything for her.

Ok if we get more char sheets up in this bitch, then I'll put up an IC
F

All finished. ^__^ Hope some more people will participate.