Searching for a few new roleplays

My idea genres for roleplays involve, drama, action, romance, but no smut. Additionally I prefer to keep the romance MxF - and I'm most comfortable playing the female role, so I'm searching for someone who doesn't mind taking on the male lead. I may be persuaded to double up on characters and play a male and female character in the roleplay - I may even roleplay two different plots with one person if things are different enough. I try to be flexible.

As for posting expectation, I expect something around the intermediate range or higher. One paragraph is great, I try to shoot for more. My muse likes to add in detail and expound on the situation if possible to add intrigue. As for how frequently I post, I will try to shoot for a minimum of 1 post a week. But will try to be quicker. Additionally - if life kicks my butt, I may vanish. But I'll try to respond to personal messages as quickly as reasonably possible. So I'd appreciate the chance to roleplay again.

Now, to the fun part. I prefer to base my roleplays off of plots/ideas that I've already concocted. So if you wish to roleplay with me, give the following plots a look over and hopefully something catches your eye. Thanks for reading this - you awesome person.

Under the cover of night, a war is waged between vampires and humans. As the years have progressed, the humans have developed weapons and strategies to counter the vampires’ speed and power. However, there are some vampires who prove to be more difficult to kill than others. One such vampire leads a clan called Kronos, and she has begun to turn the tables on this war. Elizabeth is her name, a vampire gifted with psychokinetic abilities which she has used to become infamous and slaughter any who oppose her.
But pride and treachery led to her downfall and an ambush of the Kronos stronghold. Unprepared, the vampires of Kronos were slaughtered, the vampire slayers thorough about leaving no survivors. But fate was not about to let such a powerful soul perish. With her body gone, Elizabeth’s soul found refuge in the body of an unborn child. And so she was raised as a human. Still, even as a human, she possesses all of her old memories, the mark of Kronos on her arm, and the strange psychokinetic powers that made her infamous as vampire. But unfortunately she finds that her powers are not as strong or as easy to control as a human – and for some unexplained reason she is immune to a vampire’s bite.

Twenty-one years after her death as a vampire, she has resigned herself to living as a human. However, on her way home one night, she is attacked by a vampire. But not just any vampire – this vampire bares the mark of Kronos. When all seems lost and that she’s about to become this vampire’s lunch, she is suddenly saved by Your Character who slays the vampire. Instead of just vanishing into the night like any usual vampire hunter, the man decides to stick around – probably because the girl doesn’t seem entirely human. And while she would prefer to not get involved, the return of Kronos may lead to her teaming up with the people she despises most.

The Wish [knight x princess]
Your Character grew up on the streets, but was saved from a life of poverty by the captain of the guard. Raised to become a knight, he is now honored, revered, and loved by the people. Trusted by the king, he is in charge of protecting the king’s only daughter and heir to the throne. It was a job he first detested. But the more time he spent with her, the more his feels began to change. If what he felt was indeed love, he would not admit it. For his place at her side was a her knight, not a lover, and he swore to never cross the line. But even the strongest man cannot always save the one he loves. At the sorrow of losing his princess, he goes to consult a witch of the mountains who is said to be able to grant wishes. His wish? For him to be reunited with his princess.

A snap of the fingers is all it takes for the witch to transport the knight from one period of time to another. He is now in the twenty-first century and very out of place. However, while the world around him is unfamiliar, a face brings him hope. However, she is not the princess that he knew. No, she is the reincarnation of his beloved and she has no recollection of her past life and him.

Your Character has everything that he ever wanted. His mind is a computer, able to recall any needed information in a second. He’s strong as well as good looking – girls desperately wanting to be called his girlfriend. And above all, his family owns an influential corporation, making him filthy rich as well as the future company’s president. His dull life is soon interrupted though, by a girl who’s different than the rest.

My Character has been forced to work and struggle for everything in life. She has spent hours among books, soaking in the information so that her parents would be proud of her. She’s spent days at the gym trying to get stronger so that her older brothers wouldn’t have to worry about her. Lastly, any money she possesses has come from her part-time job. She isn’t the prettiest girl on the block, but then again that’s one thing that she doesn’t strive to be. Glasses and messy hair are all right with her, for only passing school really matters at the moment.

By all logic, they should have never met. But his morning had been busy and he was late for a meeting with his father concerning the family business, so his chauffer was driving a bit faster than usual. It was at that moment that an orange carelessly toppled from her grocery bag, landing in the street. Being someone rather smart, she does look both ways before obtaining her food. However, his car turned the corner at the exact same time. Stepping out of the car, he approaches her in order to make sure that she’s all right so that he might make it up to her – that way he won’t tarnish his reputation.

However, their personalities instantly clash. It is only a short encounter, but it’s one that they won’t ever forget. After parting with unkind words, they believe they will not meet each other again. How wrong they are. Because there’s something that they never counted on, the fact that their fathers were high school buddies. The next evening they meet at a party hosted by his father. And thus their strange relationship begins. She’s determined to find his weakness and expose it to those that believe that he’s a perfect God. He’s determined to show her how pathetic and weak she really is.

The more time you spend with someone, the more time there is for love to develop and grow.

Your Character is a creature of the night – a werewolf - something unseen by humanity. He worries more about the politics of his people rather than the petty worries of mortals. However, something has begun to worry him. He is unsure of what it is, but it may disrupt his world.

One night, during just a normal stroll down the streets, he encounters a gruesome scene – the body of a human woman unfortunate enough to become some creature’s meal. As he’s about to leave, a noise draws him closer to the scene - close enough for him to realize that the human is still alive. While he doubts that she will live, he is compelled to help her. Taking her from the streets, he offers his home as a sanctuary.

He believes that if he cannot heal her, perhaps she will at least be able to die in peace. However, his worrying doesn’t amount to much, as in a matter of hours, the woman is awake and her wounds have healed. For while she may appear to be your average Jane, working at the local bakery and taking college courses on the side, she is far from “average”. The fact of the matter is that she is unable to stay dead. Perhaps the best explanation would be that her body possesses some sort of super healing ability – some mutation that occurred to make her a little less human. All she knows is that a bullet to the heart will keep her down for days at most – enough time to end up in the morgue but luckily not 6 feet under. But this time she’s not in a morgue, and her little secret of immortality just may rattle a world that has long been cloaked in darkness. Add cupid's arrow to the mix and all hell just might break loose.
Last edited: Sep 23, 2015 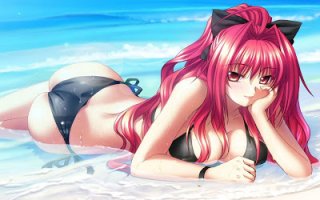 Hi! I'd like to do rich man and poor girl! Hope to rp with you!

Riley Finnegan said:
Hi! I'd like to do rich man and poor girl! Hope to rp with you!
Click to expand...

I sent you a PM so we can hash out details of the plot as needed. :)

Opening this back up cause I'm looking for some more roleplays. :)