Damn I should pay more attention to notices and stuff... Oi, I will be getting the Horatio Stabbs Bio up in here soon...Probably...
K 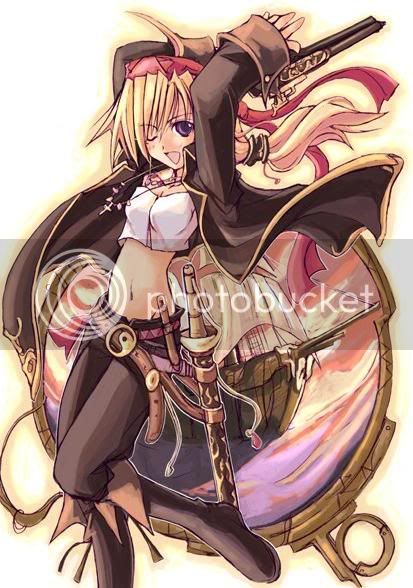 (She also has complete heterochromia of the eye -- one is the right is dark blue, and the left is light green)

Current Goal/Purpose: To stay as far away from home as possible, and to find a certain pirate who spared her life long ago.

General Personality: Bubbly, friendly, and seemingly stupid at times, Kiana is a young girl who really hasn’t gotten the full idea of what it means to be a pirate just yet. With only a year’s experience out at sea, she is still a bit clumsy and doesn’t always seem as if she knows what she’s doing. Don’t let her outward appearance fool you, though, she can be just a bloodthirsty as the next pirate. If you are her enemy, she would sooner slit your throat than look at you.

Kiana grew up as a circus performer, so there are a few skills that she has acquired that can come in handy on a daily basis. One that is particularly handy is dressing up as a member of the higher class and attending parties. By the end of the night she has usually managed to find a suitor and rob him blind, then leave him for dead. After which she usually ditches the dress and makes her escape out the window.

General History: Kiana was born in a small village on the island of Barbados. Her mother was the main attraction in a traveling circus as a trapeze artist and very talented acrobat, and her father was a handsome pirate that just happened to be passing through town on the first night of her mother’s performance. He set off to sea soon after seeing his daughter born, and nothing has been heard from him since.

Growing up, Kiana was taught all of the skills that made her mother famous. By the age of 11, she performed in a trapeze act with her mother, and soon became the show’s prized possession with her singing act. Though she was without a father, it never really bothered her. The entire circus crew was her family, freaks or not. Being the youngest, everyone treated her as their own.

The night that Kiana turned 19, she woke up to the booming sounds of gunfire throughout the grounds. Looking over and seeing that her mother was not there, she jumped out of bed and out of their tent, finding before her a group of pirates and a mass of dead bodies scattered across the ground, her mother being one of them. It wasn’t long before she was seen, and the crew attacked her. The only thing that saved her throat from being slit was an older man in the crew that snatched her up and claimed her as his own. Soon after, he let her go on the edge of town. Just as quickly as he had appeared, he vanished.

Throughout the year she tried various jobs, but nothing seemed to work out. Soon after turning twenty years old, she joined the crew of the Sea Raven, secretly hoping that she might find the pirate that spared her life.

Thank ya for the compliment, Zero. Although I don't suppose you were aware that pirate ships were usually OVER crewed, because of the need for extra fighters and for the taking of prizes?
L

Nope I'm just stupid like that. I can go edit that in under a minute if ya like- but I'm still stealing a bunk for Maggie's equipment.
W

Well... I'm sure any crew of a ship under attack will fight back, and a fight is a battle is a contest so...
W

....yeah, but its still spoils of war rather than prizes.....dunno, prizes makes me think of those dodgy claw games

With that thought in mind, I wonder if they've ever tried catapulting a crew member to another ship to grab something and then reel them back in like a fish. c___c
W

we now must do this.
though i remember something like that from Mario Party....

THATS IT it was the fishing game.
A

Glampire D said:
With that thought in mind, I wonder if they've ever tried catapulting a crew member to another ship to grab something and then reel them back in like a fish. c___c
Click to expand...

And to add to the hilarity, the item they grab could be lady's underwear. *snicker*
M

Alarice said:
And to add to the hilarity, the item they grab could be lady's underwear. *snicker*
Click to expand...

Anyway, I'll go post a bio here, and see if I can't add some testosterone to this here ship.

Character Name: Tim o' the winds
Gender: Male
Job/Role: Helmsmen
Age: 35
General Appearance: Averaged sized and broad-shouldered, Tim looks every part the stereotypical sailor. His face, half of it hidden by a full beard and dirty blond bangs, sports a distinctive scar from the bottom of his right eye to where it disappears under the cloth bandages he wears as a headband, near his temple. His eyes are at least as distinctive, the grayish blue color drawing in those who gaze into them like a doomed ship into a ghostly mist. His clothes, dirty and mismatched in color, are scavenged together from whatever loot he was able to plunder, the pride of his collection being a navy jacket with the buttons ripped off. A flintlock pistol and a cutlass are dangling from a dirty silken sash around his waist, ready to be used at any odd time. A silver colored seagull often joins him, sitting on his shoulder or hovering on some air currents nearby.
Current Goal/Purpose: Earn enough money to retire, and staying alive while striving to do so.
General Personality: Tim is a levelheaded, deliberate man. He rarely does anything without a reason as long as he's on the open seas. He can act brutish, maniacal, or seductive, but that's mostly what it will be...an act. On shore, he gets insecure, fidgety, and sometimes downright depressed, as if some part of him is missing, left behind between the waves.
He seems to value freedom above all else, and sometimes has trouble with following orders if he sees them as senseless or suicidal. He's been known to stand at the wheel laughing during the nastiest of storms, and to seemingly drift off into thought during lulls in the weather. All in all, his personality remains a mystery to most people around him, and his solitude tends to only make it worse.
Special Mention: It is rumored that Tim and his seagull O'Reilly share a bond of mutual understanding that goes beyond anything that could occur naturally between man and animal. Wether this rumor is true or not remains unconfirmed.
General History: Tim was born as the son of a whore in some shit-hole of a town no-one but the pirates who burned it to the ground would remember. He was picked up by those very same pirates to serve as a cabin boy (amongst other...even less enviable duties) and thus found himself having to adapt to life as a pirate at a very early age. Nevertheless he found a way to survive, occasionally slipping away from his duties to join the look-out in the crows nest, and even befriending a seagull which he named O'reilly.
It was when crewmen saw him talking to the seagull that they started calling him Tim o' the winds, joking that he always had his head in the clouds. The name stuck with him as he grew up to be an excellent sailor, and able fighter. He served amongst several ships, most of them pirate ships, but few fishing, whaling and merchant ships. The latest of these ships is the Sea Raven, a ship he has worked on for the past five years, earning himself a place as one of the helmsmen during that time, and a reputation for being a solid member of the crew.
A

warmasterdeath said:
....yeah, but its still spoils of war rather than prizes.....dunno, prizes makes me think of those dodgy claw games
Click to expand...

Wow. No kidding, huh? A "prize" refers to a captured vessel though. No matter who takes it.

Glampire D said:
With that thought in mind, I wonder if they've ever tried catapulting a crew member to another ship to grab something and then reel them back in like a fish. c___c
Click to expand...

I volunteer Kiana Ellette- she is a circus performer after all, we could stuff her in a cannon (nicely!) and she could bring us back their captain's undies.

Not sure I'd really be too interested but hey, I'm not the only woman on the ship.
K

xD I'm sure Kiana could be persuaded to be stuffed into a cannon.
L

Blaaaaagh. I hate bridge posting. But I wanted that ring casing- it's gonna be a treasure map. Or something. Or have something to do with a treasure map. Well, the Sea Raven needs leads right? I'd have posted earlier but this week has sucked. Baby showers, homework, friends who want attention laundrya mathtestandallIwantismycoffinDAMMIT. Why won't anyone let me SLEEP?
L

Hm. Well, if anyone is still interested in this RP (I finally get my IRL straightened out so I can role play and everyone else vanishes... Ain't that always the way?)

I don't know what the treasure is, or what adventures we may encounter along the way, but I have a first step for us.

A Giant's Ring is basically two metal rings set to each other that fits over a compass. It's marked to determine north, the direction from the original departure to where the loot was stashed, and a funny little mark indicating distance. Now, the ring Maggie has picked up is a copy, so I recommend someone knowing someone who deals in trade of relics and forgeries who will know where the original ring came from.

If no one posts within the next day or two or whatever I'll just head downstairs to meet the Huntmaster and see if he wants to tootle on back to the ship.

I got held up with the holiday weekend and a migraine, but I'll be posting tonight. >:D
Show hidden low quality content