Original poster
She's lovely and you've put so much effort into it!

Thank you! Welcome to Spero!

Lol awww! Adrian and Heather are cute ^^
A

Original poster
Thanks Aira. I've done some more research and discovered that gold and gems are often in the same place. The problem is, gold is very pliable-- it cannot be used as anything more than ornamentation, generally. Definitely not for weapons... So Kyal can export some of that gold, but will still need to import stronger metals and alloys, iron and carbon (in the form of... I don't know, graphite?) in particular. I've been reading for about an hour on how to forge steel; I barely understand it. Help.

I did not intend to say that Valkyr was mean, just that it would be natural for two gem-rich countries to compete a little in their trade. There wouldn't have to be any hard feelings, because they are both very neutral countries. Valkyr's gem trade would just give Kyal incentive to do their best. Is that understandable and okay?

Hehe. Well i'll be honest there's A LOT I could say about what kind of steels you could use. I mean the basics you would want are Titanium and Steel. Although Titanium would be ridiculously difficult to forge it is a very strong substance. As for steel is also a very hard metal, but depending on whether you use High Alloy Steel or Low Alloy Steel the strength of the blade and flex will vary. As the more carbon within a blade give it less weldability. You could also use less common alloys such as copper, tin, zinc, lead etc. Which depending on whether your kingdom also makes armor may or may not be useful to you. The carbon form which Valkyr would probably use is diamond. What use of carbon your country wishes to use that is up to you. Iron and Carbon are mixed to make steel, so yes graphite will do.

I apologize for my misunderstand. When I read it as 'tolerance' it could suggest unwanted ties between the two. I think that the two countries together could probably easily help each other progress. That is understandable that it will give your kingdom incentive but remember Valkyr is not the only Kingdom to trade weapons. There is also Heimei's Kingdom so you have two competitors.
A

Original poster
Woooah~ I'm impressed that you know all that. Anything related to metals, chemistry, and science is beyond me. Violence, though, I grasp... and food.

The weapons Kyal makes are only for Kyalians; they don't export them unless they're special "purdy weapons." Like ridiculously ornate daggers and swords. It is the gems that Kyal wants to be the main exporter of. I saw lots of countries with ores as exports, but only Valkyr has lots of gems. Am I wrong? If there's another big exporter of gems, Kyal will have another competitor. I shall go check again.

You're right, though, in the suggestion that Valkyr and Kyal could help each other even while they compete in the trading of gems. They are alike in several ways, just one of which being their neutrality. What do you suggest they aid each other with? Since Valkyr is so focused on strength and skill in battle, do you think that they might want to learn Kyal's traditional form of fighting? It isn't fully known by anyone that is not Kyalian. I know that Kyalians are always up to physical challenges, so they would probably enjoy learning a new way of battle.
D

Original poster
So. I was thinking about my character...and she really wouldnt know much about the others...her country is kinda out of the way, and she really doesnt fit in socially with the other princes and princesses around...so, how do we wanna work that?
S

Original poster
make her a thread in the Group and we can all discuss it with you!

I'm sure we can find some kind of way for her to get know the others.

There are already about four IC's open for that opportunity! :)

1- the king's council
(the children and their parents all meet at a young age)
2- eean's death
(prince eean of liberta committs suicide. this is after Queen Aurora/Melanie's death, about a year after. before the events of the time travel, though)
3- lilac's 18th birthday
(based on your character's age and lilac's age, you'll know how old you are. this is a year before the kaelen events. its a celebration in Ethare, Lilac's kingdom)
4- Welcome to sellectica
(when damien is 18, five years before the kaelen events, a new kingdom, sellectica comes to surface. the other heirs come to greet them.)

you may opt out of any of the IC threads with a note that you 'send'. For example (for lilac's birthday, Heather sends a note saying she is unable to attend, etc)
D

Original poster
alright...there's already a group thread for her...and she's really young, but i did put her in the King's council one as a really late comer...but idk how to fit her into the others except the last one...Welcome to Sellectica
S

Original poster
its okies :) thanks

Arashi I have replied to you on your character post about the subject. =) Thank you for the compliment but don't worry to much. Science was my worst subject as well, I did better at English and Math. ^^ 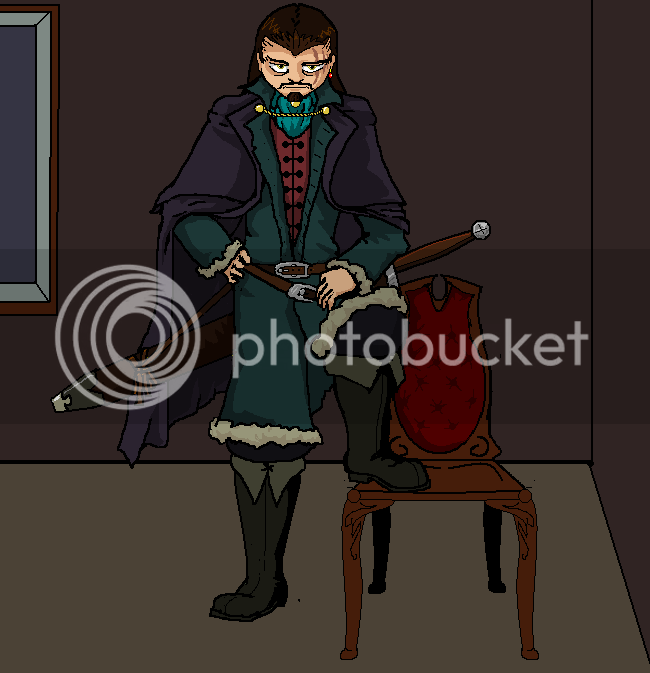 Name: Josephi Romani d’Alturez
Age: 22
Title: Prince
Kingdom: Lok’kaniia
Kingdom Description: The country of castles, ghost stories, wine and monsters.
Lok’kaniia has been a country of Warlords and civil unrest for nearly forty years. With a <st1:place w:st="on">Mediterranean</st1:place> climate and not much trade other than weapons and grapes. Lok’kaniia SAYS they make the best wine in the world, but with hints of gunpowder and Smokey pine, their wine is better suited for making brandy, which they never do. <o:p></o:p>
<o:p></o:p>
Prince Josephi wants to change that. He can see that in the next few years, the civil wars between warlords will come to an end, and once his warlike father is gone, He can pull their country in the right direction. <o:p></o:p>
<o:p></o:p>
Lok’kaniia has never been A peaceful country, and somehow never sought to bother other countries, but the landscape, rich in pine tree’s with forests full of medicinal herbs has gone mostly untouched save for several large burnt battlefields between Castles.<o:p></o:p>
<o:p></o:p>
When night comes, and especially on full moon nights, tradition says that only married men may go outdoors. The legends of vampires, wolf men, and the living dead scatter abound in dusky taverns and Musty servants quarters. Every once and a while though, someone goes missing and is found mangled and rotting weeks later in the forest, or pale and dying with bite-marks all over them. <o:p></o:p>
<o:p></o:p>
Nobody really knows if the stories are true, but the possibility that they ARE breeds fear, and that fear may well be what drives the warlords to civil unrest.<o:p></o:p>

Personality Traits: Strong hearted and impatient, he is anything but arrogant, his time in his fathers presence has made him a ‘vlad dracula’ sort of prince, but he values human life more than anything. Something his strange father taught him, though his father seems not to practice what he preaches.
General Past: Watching his fathers cruelty towards others bred in Josehpi a kind of compassion, though his regal upbringing makes him stern, and at times a little heavy handed. The last raid on the castle saw an eighteen year old Josephi fighting alongside his father, sword in hand in a technique passed down for centuried trought he d’alturez family. One handed greatsword. Elegance… and deadly poise. He killed for the first time that day.. and has never been the same since.
Connection to Kingdom of Cella: Josephi visited several times when his father sent him away while he went to war, not wanting his son to see it.
Magic: Rituals of faith- bolstering luck and mental fortitude. Concentration rites and a passing of the dead ritual learned from his grandmother to make sure someone who has died does not become undead. Nothing flashy, nothing useful outside his own use.

Original poster
"will be tweaking him" made me think you weren't done, yet!

please jump in! if you have any questions, ask!
L

Original poster
Welcome to the RP, Desaecula! I look forward to roleplaying with you. :)

tewakign means spellcheckign and that i'm not done with the picture yet ^_^ but shall be in minutes, re-editing will be done by tommorow and BOY do i have alot of catching up to do! >_<

Original poster
glad to hear it!

if you need any help jumping in, just ask!

next, you should post your profile in the group and discuss some character relationships.

you could join the current IC threads ~ or you could just discuss what you would have done with the other players. whichever is easier :)

you're just in time, though! we're going to start soon =]
S

Lovedove and I worked hard to give you the very best in dramatic openings~ I betcha you'll cry ;)

There's still a bit more to the introduction~~~ :]

Butbut, you can go ahead and write your first posts (you are either in the process of leaving Kyal to reach Cella or on the way) ~ please make your posts a little longer than usual to reflect any changes in personality, any changes in appearance, relationships and most importantly how you feel about this whole Lilac tells us to travel in the past thing! (EDIT: and! how or when you came to Kyal to seek protection from exile)

:] Love you guys! Hope you enjoyed our romantic angst!

Lovedove, you are amazing!
We wrote this over a period of a few days through PMs, but the emotions are so continuous. WAHHH @___@
L

Ignore my last reply to the PM, Sakura. I found the thread!

(bows) Thank you Sakura, but you're description of Lilac and her emotions is breathtaking as well.

Now the RP can begin! I am pretty excited :D
S

there has been an edit to the main post, it now contains a FLASHBACK (in teal)

and a clarification, the heirs are arriving/travelling to the graveyard in Cella. Assume they have already left Kyal. ^-^