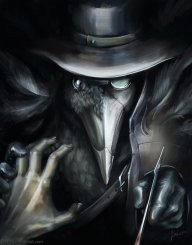 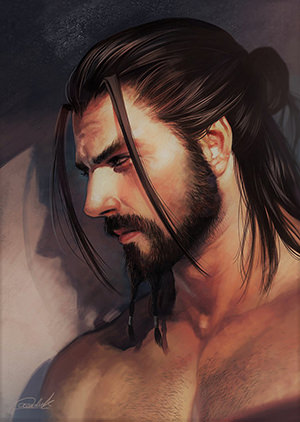 Main Base: The Land
Name: Hagen Griffith
Nicknames: The Moray (reference to moray eel), Savage, Hags, H, Squid/Squidy (by his sister and some of the orphans)
Role: Criminal (with a side dish of "it's not what it looks like")[/hr]
Character Pitch:

"Nobody likes a Moray eel. Slippery, deadly little ambushers. They're always trouble when you come across. Well you know what? This Moray is just like that, only he ain't little...."
​
Leaving their broken home on the Outside, soon after their mother perished, it took a great deal of time to now impoverished Hagen Griffith and his little sister to reach the very last resort he had to turn to. He had no idea what awaited them, as they haven't heard a word about their father ever since the evergrowing poverty gave him a good enough reason to flee for the Golden City without much excuse to the family he left behind. There, his son disturbed his lavish, comfortable life in the Sky with his unwanted presence. For the man that no longer cared about remains of his old life, knowledge of his children being present in the Golden City was not a positive one. Feeling being mutual after he learned about his father's money-grabbing nature, Hagen was quick to disown his father before he would have been disowned himself, claiming himself and his sister orphans without a second thought, throughout the years developing even stronger animosity towards the Floaters and their coin. But as it always is, surviving without the coins was a hard task. More so, taking care of another.

Always being lean and fit young man, with a bit of a knowledge and a good head on his shoulders to go with it, he put those abilities of his to 'good use'. Illegal fights in the Underground were hardly an appealing job to turn to, but they brought a decent coin. But the coin tended to leave him faster than he could gather it and soon he came to realize a favour was much better of payment in that situation. Promising to his sibling he would drop the illegal fighting altogether, he took on the smuggling business, which was soon obvious he had a knack for, as well as negotiating a proper price. It was amusing how people were quicker to offer coin than favour on their behalf, but those that were desperate, often did even the biggest of things, and he always had a way to convince them to stick to the deal. As far as he was concerned, some of his favours not even the richest of Floaters would be able to afford without a personal sacrifice. Although going in all guns blazing is never his first option (unless the job requires it), being his last resort, he tends to be the nastiest of bruisers when needed. Many therefore rather avoid risking it anyway.

Having a soft spot for the forgotten orphan children of the Underground and the Land, Hagen offers protection and home to those too young to take care of themselves out on the streets, and those that are able to do so, are earning their meals by running his errands. Those familiar with the fact, often wrongly perceive it as an abuse of young street rats, even though there is more to the truth. Long given up on expectances of Golden City's society in order to accept him, he had provided no effort to prove anything to anyone, let alone justify his way of life, and he intends to keep it just the way it is.[/hr]

Hagen comes off as a brute, standing at 6'4'', and carrying all of his 255 lbs. of muscles around almost effortlessly. Regardless, he is just as agile and endurable as he is strong, built to resist, deflect and bruise more than one assault at a time. Even among the people of The Land, and The Underground, used to physical work, he comes off as the bear of a man one would hardly relate to any species of eel at the first glance. Not particularly worried about the image of himself, Hagen wears (or doesn't wear) whatever he feels like most of the time, and as long as his clothes are clean and well assembled, he is perfectly fine with it.
Face Claim Credits: "Carlnes" created by "aenaluck" on DeviantArt[/hr]
Reactions: Nemopedia, DayDreamer and Sailor Arti
Show hidden low quality content
You must log in or register to reply here.
Share:
Reddit Pinterest Tumblr WhatsApp Email Link
Top Bottom