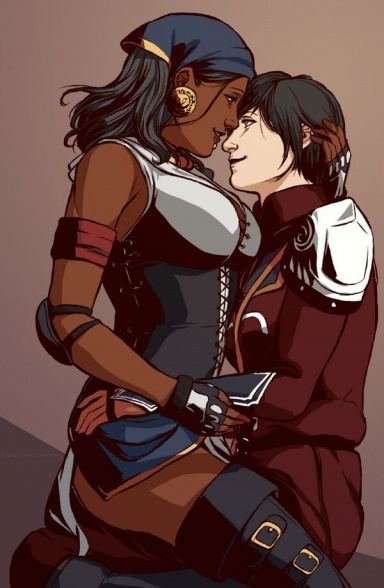 Good day/afternoon/evening and welcome to my partner search. Please take a seat or stand, whatever your preference is. I have been abroad the past few months and during several of my points of internet deprivation and extensive bus riding I began to work on a few plots I’d shelved awhile back. Both involve characters in a relationship and exploring that in the confines of the plot, so if you’re not a romance fan I’m not afraid these plots won’t be for you. If this is you, door is to your left, have a pleasant day…Are they gone? Okay, for those who have stayed let me go over some traits that I’m looking for in my partners.

Partner Traits:
That's the basics of what I'm looking for in a partner, thank you for reading through it. I would like you to send a writing sample if possible so I can see if our styles will mix well. I can send you one as well if you’d like. Now for something completely different (get that reference and you're my friend for life).

Comments on Myself:
Okay, that's all the stalling I'll do. If you have any questions or things you'd like me to be aware of, just let me know. Anyway, on to the plots.

Promises to be Kept

The lands of Dreor and (NAME) have been frenemies ever since the independence of Dreor. This relationship has allowed both to prosper over the years, but as of late internal conflicts in Dreor have begun to threaten its stability. High Lord Keegan Innis fears he is losing control of his land due to his mistake early in his reign of marrying outside the Mage College. While there is no open rebellion, hints have begun to drift around the court that the mages are dissatisfied with their ruler. Fearing an open rebellion could destroy his small land and knowing the mages are too powerful to confront openly, Keegan makes the only move he can in order to save his land. He offers his firstborn child’s hand in marriage to tie the kingdoms back together as they had been in times of old. His only request is that his daughter be fostered with the royal family every summer until her eighteenth year (the traditional age of marriage in Dreor) in order to teach her more of her future home and to make the transition easier for her. The deal is struck and so things are set into motion.

It would begin either with the children’s first meeting or perhaps somewhere down along the line. I want to build the character’s relationship as children before we get into the heavier plot elements when they are older. There will be several episodes of them growing up of various lengths all intended to show them becoming closer before they actually marry. As for the rest of the plot, I’d like to discuss that with you. If you would like to make up the history and current issues of the other country yourself, I would be fine with that as long as it can fit into the overall plot. If you’d rather do it together that would work as well. I will admit I’m going to be rather picky with this one because I have a more specific idea for this story, but that doesn’t mean you shouldn’t bring up your own ideas. As long as the basic part of the plot stays the same, I’m fine with changes.

The Bonds We Tie

Settings: Modern City not necessarily in a specific country. Think Metropolis vibe. A place for the characters to be with plenty of creative license. (Note: I DO NOT want this plot to be anime-ish. I prefer realistic roleplaying. This note will make sense in a moment)

Plot: Background is needed to understand my intentions with this plot. Basically I want to rewrite the story of the manga Black Bird (reason for aforementioned disclaimer). When I read the series a few years back, I found the concept to be an interesting one. Here’s a link to the Wiki page if you’ve never heard of it (Black Bird (manga) - Wikipedia, the free encyclopedia). I like the idea of a spirit world existing alongside our everyday world and then having them come together. Their version of the spirit world was really interesting to me with the Japanese mythological creatures and just how everything was laid out. I also enjoyed the characters in the first book and their conflicting relationship. What I hated was the way the series went. Their relationship became boring and rather infuriating when the main character turned into a simpering wimp and her love interest became an abuser in all but name. I always wished the main character would have kept that same fire she had in the first book rather than turning into a damsel in distress. The plot was rather clichéd as well with the girl being chosen as a “sacrifice” or something like that and the man protecting her from random bad guys. These aspects I wish to avoid.

Now I do NOT want to use the same characters or story. I want to take the basic concept and build on it. There would be a human girl who befriends a boy from the spirit world while they are both young. There is nothing special about her really and he will be in your hands. Could be in line to rule something, maybe his family was banished. I would like you to give him a more interesting place in the community than random citizen, but I won’t force anything on you. They grow up together, but he never tells her what he really is. Just so you know, this will NOT be a high school setting. Pretty much they remain close throughout the years, though things could always come up during that time to separate them if that would make it more interesting, until they both mature. When the girl’s in university, their relationship begins to lean towards the romantic side. Here is where the majority of the plot will be. Her closeness to him begins to put her in harm’s way and there is no way to continue their relationship without her finding out his secret. What happens from here is all for us to decide. I want the focus to be on their relationship, but I like action as well.

This is really a bare bones plot, but I think it could be fun if we both use well-developed characters and build up the plot a bit more. We don't even have to use Japanese mythology if there is another sort you would prefer. This plot is much more open ended than the previous.

If you're interested in either plot, send me a pm and we'll talk. I may not answer right away as I am currently study abroad in Europe. My time is divided between exploration, class and down time. So have patience. Thank you for your interest and I hope to hear from you soon.
Last edited: Nov 5, 2015