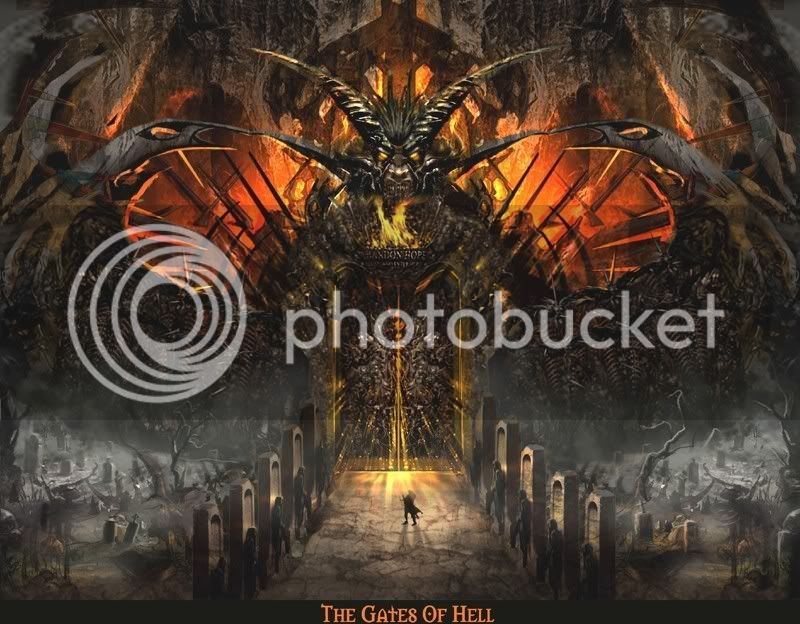 Congratulations. You're dead and have done something sinful enough to land you in front of the Devil himself. Your stomach turns in anticipation for what awaits you. The group of you that were sent here today, stand around waiting for someone to open the gates so that you can see what you're up against for eternity. But wait! What is that light above you? A winged figure glides down to you, hovering in front of the group.

"Hello," The winged creature says, addressing the group. "I'm Gabriel, and today happens to be you're lucky day." He lands softly on the ground before you and folds his wings.

"Today, 'The Boss' has decided to make an exception for you all. No, you're not going to pack up and leave for Heaven right away. That's not how life, or the afterlife works."

"You do get a chance though. You all have committed sins to land you here. If you can overcome the sins that you have, you may be redeemed and sent up to Heaven."

"Those sins are: Greed, Vanity, Lust, Envy, Gluttony, Sloth, and Wrath. You must be careful, because even if you overcome or don't have one sin, you are susceptible to the others."

Gabriel opens his wings, ready to fly off. "Good luck to you all, I suppose." He lifts off the ground, back to you. "Glad someone thinks you're worth something..." He flies off into the light, leaving you staring at the gates.

Hello everyone! Basically, your characters will be going through 7 different events or obstacles in Hell that have a different sin that they have to overcome. Any questions feel free to ask!

Original poster
Name: Sandra Withers
Gender: Female
Age: 23
Appearance:
Medium height and of athletic build she is nonetheless a pleasant sight. She usually ties her blonde hair back giving her the look of a schoolgirl, and this combined with her easy smile make it hard for many to resist her weather shes being friendly or charming information from someone. At the time of her death she was wearing black boots, jeans, and a long-sleeved black top that covered up the bulletproof vest she was wearing.
Cause of Death: Multiple 9mm rounds to the chest, and one in the neck. Vest penetration hit her heart. Fired by S.W.A.T member using an MP5 SMG.
Sins Committed: Greed: Bank robbing. Lust: She had an on-off relationship with her group's leader even though he was married. Wrath: In disregard for her own safety she set out to hurt the SWAT officers as much as possible in her final seconds.
Personality: When alive she was talkative and even a little flirty. She was well liked by every member of the team for her charm and sense of humor, but most of all her ability gain people's trust. Ans essential tool for getting the information needed to plan a job.
Brief Bio: Growing up in a middle class family, Sandra was always looking for something more than the endless hours of school and the typical working life awaiting her. In college she started going out with older men, particularly rich ones until she met Robert. What started off as a minor fling ended up with Sandra dropping out of college to join Robert's team of bank robbers usually going ahead and scoping out the bank in disguise. One day it all went horribly wrong. Within minuets of the entering the bank the entire building was surrounded and the robbers took several hostages. After a long standoff SWAT breached the bank and shot two of the robbers before the rest threw down their guns.
P

Original poster
Name: Avian Croft
Gender: Male
Age: 25
Appearance: Was wearing a blazer/hoodie combo with a t-shirt and jeans at time of death.

Cause of Death: Murdered. Got shot by a sniper when he was headed out of the house one morning.
Sins Committed: Lust-Constantly was with more than one girl at the same time. His record is 8. Vanity-Is always primping himself, and has a GIANT ego. Greed: Cons several people out of their money.
Personality: A very charming, egotistical playboy who loves to have fun. He's used to a rich lifestyle and can con people out of their life savings.
Brief Bio: Grew up kinda poor, but quickly learned that he was very attractive and had the gift of gab.
He moved to New York at age 18 and quickly took the stage as an actor. He dated several young actresses, breaking their hearts everytime. However, the last time he did it, he didn't expect the girl's brother to be a sharpshooter.

APPEARANCE: http://gOndrei.deviantart.com/art/Meth-Addict-42989579 - Before and after. Most of the time Eddy wears a black shirt with a white, long sleeve shirt underneath. He wears blue jeans that are torn out at the knees.

Cause of death: - Drug overdose

Sins Committed: - Gluttony - Eddy, in his life, was a complete and hopelessly addicted drug addict. He was constantly putting huge amounts of drugs into his body, never knowing when to say when. There was never any limit to his abuse. Sloth - Eddy would spend day after day, often times, just laying on his bed in a drug induced stupor.

Personality: - Un-caring and indulgent. Un-inviting and vacant; Eddy is a hopeless drug addict. He has no concern for the well being of others. His one and only goal in life is to acquire and use drugs in any form he can get his hands on. Often times he will resort to any means necessary to get a Fix. Most people that know him.....wish they didn't.

BIO: Eddy was born in the middle of winter by a homeless bag lady, who right after giving birth to him, died on a park bench. He went through a number of foster homes until he ran away at age 13. After this he began using drugs, meth and alcohol mostly, but soon enough he would graduate to heroin. Once he started shooting up the drug he was already well on his way to a career of drug abuse. Everyday he lived he set himself back a week. His using habits were constant. One day he decided to do twice his normal amount all in one shot, thus ending his life.
P

He tends to wear dress shirts, or suits, almost all red. At the time of death, he was wearing a red pinstripe dress shirt, matching pants and tie, red dress shoes, and a black undershirt, as well as a red camoflauge bandanna around his head. Somewhat good physique, can't take many punches, but has an iron will when he has something set in his mind.

Cause of Death: Engulfed in flames during an arson attempt on a house with gas cans in the garage, was killed in the ensuing house/car explosion.

Sins Committed: Wrath: Since it being his nickname and all, he has violent tendencies, which all end in flames. Anyone who excessively pisses him off, gets burned to death by arson committed by him. Greed: He stole as if he were looting at Armageddon, he steals anything he needs for making fire, and food, usually.
Lust: He's had sex almost every night with different hookers, all ending with him scaring and burning them off and away.

Personality: He's a certified lunatic, pyromaniac, and paranoid-schizophrenic. He is liable to burn himself to death, he is so unpredictable at times. But when he's calm, he is a very witty individual, charming and funny. He's got a perverted mind, and tends to be lecherous in tendencies. He does, however, like to help others, his only glimpse of sanity as a human, and he does what he thinks is right. Too bad he's crazy, so blowing himself and everyone to... well, anything could sound right to him

Brief Bio: He was born in Gettysburg, PA, to Jason and Wanda Verduzco, to a middle class family, perfectly normal American family, until his house was burned down when Vincent set fire to the Christmas tree near Christmas. Both were killed, and he was sent to foster parents. He was entranced by the fire that killed his parents, and became a pyromaniac soon after at the tender age of 7. He was sent to counseling after he torched the foster parents cat as a magic trick at his 10th birthday. He had a mental breakdown after 3 years, realizing he was a paranoid-schizophrenic, but he slowly went mad with the thought of killing and hurting so many people, having been mild mannered before. He went clinically insane, and set fire his psychiatrist's house and office, and ran away at the age of 19 from his foster parent's house. He has been on the run from the law, staying with the few friends he's had as a child. One day, getting some groceries, he ran into a man, and he apologized, and the man he bumped into yelled and screamed at him, calling him worthless and actually hitting him before the store clerks threw him out. Vincent found the man (and his families) house, and threw a molotov cocktail into his garage window. Unfortunatley, he tried throwing more bombs inside, and the garage had a Hummer and a car, and several tens of gallons of gas. They ignited, and the house was obliterated, along with Vincent and the family of the man.
P

Original poster
Hey everyone. ^_^
Thanks for taking an interest in this RP!

I will probably be putting up the IC after the New Year, unless we get another player or 2. ^_^
P

Original poster
Hey all!!! This is kinda like the Grand Re-Opening of this OOC.

It never really got started so, We are totally open to new characters!!! ^_^
Q

Original poster
Um...I know Pride goes in there somewhere. I think Vanity was mixed in with it, actually. And I think I might want to join this later.