The United States, like most superpowers, is always looking for an edge in warfare. Nuclear technology has proved to be something of a weaponry dead-end, and with the recent shift to unconventional warfare, focus has shifted from creating better weapons to creating better soldiers. Thus began "metagenetics" projects in numerous countries.

December 1, 2025 - The Hague Convention is signed, banning government-sponsored metagenetics research, as well as the private development of metagenetic species or organisms for military applications. All governments are directed to shut down any metagenetics programs they have already in progress.

An...unsavory...side effect of this is the need for any "Metahuman" subjects, known among the scientific staff as "Moreaus," to be terminated. Scientific staff in general tend to be fairly moralistic folks, however, and often take exception to this; in many cases they smuggle Moreaus out of the facilities or aid in their escape.

The Navy Metagenetics Research Facility, Los Angeles has just been redacted. This is the story of the Moreaus comprising Development Group B.

This RP will be based in the d20Modern system. ALL players will be Moreaus - members of Development Group B. Details and resources to follow.
A

-Creation Rules-
System: d20 Modern
Starting Level: 2, Max HP for current levels, Standard Heroic Score Package (15, 14, 13, 12, 10, 8).
All characters are Moreaus; specifics will be provided for those without the print book.
All characters are 14 years old. Period. This makes them fully mentally and physically adult; the equivalent of a ~20 year old human.
Backgrounds must be either Military or Athelete unless you get special permission from me.

All characters have three designations:

Name: What your groupmates call you. This is the name you will generally use.

Nickname: What the scientists called you. I will provide you with this after you create your character.

ID Code: The ID string encoded on the bar code on your left shoulder blade. I will provide you with this as well.
~~~~~~~~~
Moreaus:
Skils: Moreaus get 4 fewer skill points than humans at 1st level and 1 fewer at each subsequent level thereafter.
Feats: Moreaus get one bonus feat at 1st level (humans get 2)
Anyone looking for height and weight modifiers, ask me or Frost

Bat traits:
Light Sensitivity: Bats are blinded by sources of bright illumination (from flashlights on up). They can counter the blindness and see normally by wearing dark-tinted sunglasses or visors, or they can rely on their blindsight.

-
Bear Traits:
Vairable Size: Covert Bears are Medium size. Overt Bears are Large-size, and have a 10x10 fighting space and a 10 foot reach.

Claws: Overt Bears have pronounced, nonretractable claws that function as natural weapons. Each claw deals 1d6 points of slashing damage (plus the moreau's STR modifier) and threatens a critical hit on a natural 20.

Poor Vision: Bears have bad eyesight. They take a -2 penalty on Spot checks and take a -4 penalty per range increment to ranged attacks, as opposed to the normal -2.

-
Dolphin Traits:
Hold Breath: Dolphins can remain submerged for a number of minutes equal to their Con score before needing to surface for air.
Blindsight: Overt Dolphins have blindsight out to 60 ft.

-
Feline Traits:
Claws: Overt Felines have ratractible claws that function as natural weapons. Each claw deals 1d4 (plus Str mod) slashing and threatens a critical hit on a natuarl 20.

WEALTH AND EQUIPMENT
Characters have wealth bonuses of +0. I wouldn't recommend taking the Windfall feat.

Any gear not listed as claimed is distributed among the duffels.
B

Original poster
I'm in. Give me a few moments...
V

Original poster
I'm in too, but will create my character at home unless i get help.
M

Original poster
I plan on joining as well, however I've never done a point system, or whatever you call it, so if I need help, will you supply it?
A

Original poster
I planned to post this before I got responses, but some additional details - I will not allow moderate moreaus. Either Overt or Covert. There's a 'lore' reason for this. Also, no overt bat moreaus. Covert only.

If you wanted to play one of these, talk to me and convince me to let you.
V

Oh.... Can i do a pilot, trained in simulators, to see if their better relfexes gave then much of an edge....?
A

Also, Important-to-know Moreau traits are up.
B

Class Features:
Talent: Savant (Craft: Mechanical): Bonus equal to Smart level on selected skill.
Feat: Gearhead: The character gets a +2 bonus on all Computer Use checks and Repair checks.

Personality and Background:
Mika was meant for a CE troop. She was a shocking prodigy in that field, in fact... above and beyond expectations. Her dexterous fingers and incredible intellect were almost infamous about the Research Facility - scientists quickly learned not to place their devices in reach of the young Mika, who would masterfully take them apart.

As she grew in age, so did her skill... taking things apart and putting them back together... and, eventually, improving what she had taken apart. Though she was ignorant to ways the world worked, and didn't think to write down her findings, she eventually became able to speak on a near-equal level with the scientists on matters of creating things... as well as on history and tactics, thanks to the military training.

Quiet and focused when she needed to be, talkative and quick to laugh when she wished to, Mika became a favorite pet project of certain scientists. It's no surprise that they made sure she could escape to see (hopefully) better things...
D

Will make a character, btw guyzesz, here's a character generator if you need one to make all those silly character rolls a whole lot easier.

Racial Traits:
+2 Dex, -2 Con, +4 Cha, -4 Int
Claws: Overt Felines have ratractible claws that function as natural weapons. Each claw deals 1d4 (plus Str mod) slashing and threatens a critical hit on a natuarl 20.
Skils: Moreaus get 4 fewer skill points than humans at 1st level and 1 fewer at each subsequent level thereafter.
Feats: Moreaus get one bonus feat at 1st level (humans get 2)

Class Features:
Tallent: Evasion: If the Fast hero is exposed to any effect that normally allows a character to attempt a Reflex saving throw for half damage, the Fast hero suffers no damage if he or she makes a successful saving throw. Evasion can only be used when wearing light armor or no armor.
Feat: Simple Weapons Proficiency :The character makes attack rolls with simple weapons normally.

One M16A4, one magazine total ammunition
One M9 Bayonet (knife)
One set of green fatigues
One set of civilian clothes
One duffel bag

Designed and made my the navy for the navy with the intended role of piloting helos. He also had a aptitude for stealth and once that became apparent his handlers trained him in the art of evasion.

As a military project as well as a scientific experiment he was constantly put through physical test and it was found early on that he had an aversion to water and this has handles in the usual military style and while it is mostly trained out of him he still avoids large bodies of water.

Surprisingly easy to talk like most feline based Moreau, and with a habit of sneaking up on his trainers he was said to be like an overgrown kitten and many in the facility where fond of him, in fact is was his very guards that helped him escape.
D

+2 Strength , -2 Dexterity
Poor Vision: Takes -2 penalty on Spot checks and -4 penalty per range increment to ranged attacks as opposed to the normal -2.
Skils: Moreaus get 4 fewer skill points than humans at 1st level and 1 fewer at each subsequent level thereafter.
Feats: Moreaus get one bonus feat at 1st level (humans get 2)

Being born to be a heavy man, Victor wasn’t afraid of becoming a more hands-on kind of person when the situation needed it, and by his judgment, most situations could do with a hands-on approach.

Growing up he proved to be quite a capable fighter, simplistic in how he fought, but the army didn’t have qualms about how he would kill people, and so they also taught him how to shoot, and though he clearly wasn’t the best shooter, he did a good enough job if he didn’t exactly need to get close to his targets.

Grizzly, as he’d come to be called among the group of other moreaus, made himself useful outside of combat training by helping out with trivial things, such as plumbing or with repairs of broken tables and such, since he’d been suggested to have more finesse, though he didn’t quite see the point, he still obeyed, not like he could say no. He turned out to be pretty helpful to the scientists, and though clearly not one of the wittiest people around, he picked up on a few things to get a personality likeable enough to be, well, cared for by the scientists.
A

Original poster
A'right, folks...I'm going to start once I get one more player. Unlike 2C, this one won't be limited slots, and will probably be accepting new players for the majority of it's run, however long that may be.
M

Racial Traits:
Hold Breath: Dolphins can remain submerged for a number of minutes equal to their Con score before needing to surface for air
Blindsight: Overt Dolphins have blindsight out to 60 ft.
Skills: Moreaus get 4 fewer skill points than humans at 1st level and 1 fewer at each subsequent level thereafter.
Feats: Moreaus get one bonus feat at 1st level

Personality and Background:
Poseidon is a very dutiful man, very focused on the task at hand and the overall goal. His versatility and high performances in simulation runs attracted the interest of the military, very much impressed at his progress and eager to have him on the battle field. In addition, Poseidon can take a good deal of abuse and his intelligence only increased his usefulness.

Despite his intelligence, his dutifulness didn't allow him to relax much, and in times of social lightness, was very awkward and quiet. This amused his trainers, who teased him about being more scared of social events than combat. Rather than be offended, this only caused him to withdraw more, to more of the amusement of the trainers.

When the order came to clean out the program, Poseidon, upon finding out that all Moreaus were to be eliminated, did not try to resist or run away, merely accepting this as fate and part of the mission. However, the scientists, in awe at his dedication to his superiors, couldn't bring themselves to kill him and freed him. They tasked him with taking care of the other Moreaus, specifically those with weak battle capabilities, and Poseidon holds this task very highly.


Please inform me of any additional changes.
A

Original poster
I had planned to start the RP later on in the story than I actually decided to. Therefore; all the gear in the gear list is either on the Masters at Arms in the hallway or in the lockers Carlos is thinking of. The exception is your fatigues, unless sleep naked and didn't think to grab some clothes. In which case you can probably find a set in the locker room as well.

(think of it as calling dibs)
A

Original poster
A rough map of the area where our story starts: 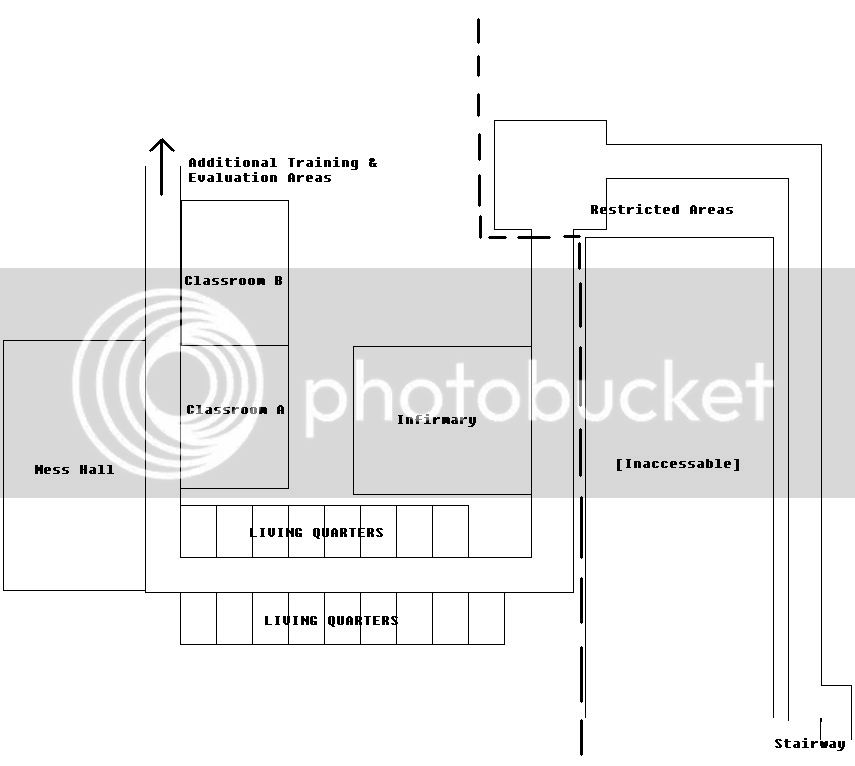