Project Genesis - Echoes of the Past

Nature has once again claimed the world as her own. If one were to wander around the old cities, over growth is now covering most of the buildings and the signs of human activity would be eerily missing. 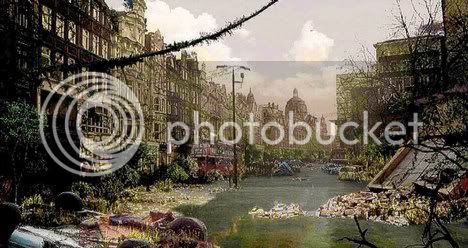 The hypothetical traveler would have to question what happened.

In the late 1980s, as the U.S.S.R.'s economic and political decline put it in danger of losing the Cold War, the Soviet leadership made a desperate gamble to rearrange the global balance of power.

They unleashed a super-tech weapon that was designed to trigger human brains to become overwhelmed and cause violent deaths. These weapons were called Ghost Bombs. However, little did the Soviets know, the US government had a similar weapon that would be unleashed as soon as the East Coast was hit…. 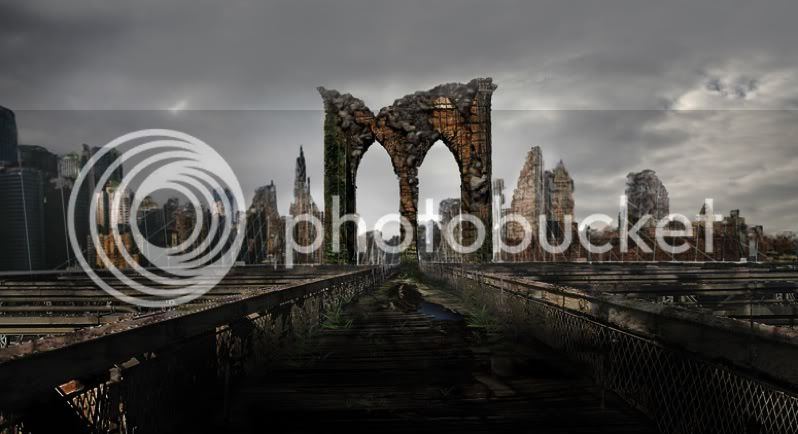 However, moving closer towards the seas and waterways, one can find that the human will to survive has once again proved its worth…

Roughly 600 years have passed since that time. New nations have arisen from the ashes of the old. States like the US and the USSR had difficulty maintaining order and power, thus international organizations and religious sects have been established in the aftermath.

Semile, New Rome, The Hope of the World.

The nation, itself is in fact a series of “bubbled” cities that extends roughly 227 miles north and south, or what was once considered the Eastern sea board of the United States from DC to New York. Built to last for hundred years, the cities were designed as a sanctuary for humankind after the falling of the Ghost Bombs. The concept of the city is that it is self-sufficient and in that sense, the perfect means to keep civilization in an otherwise unknown world. The average citizen knows next to nothing about the outside world, due to fears of rebellion by the secular arm of the Church. It is inhabited by humans, cyborgs and a few androids.

Since the Ghost Bombs only killed off populations and not technologies, computers and other informational higher technologies still exist in Semile, as they do elsewhere. It is more or less similar to what we have now a days with greater focus put on genetics/cloning and the creation of super soldiers to send out into the so called frontiers. It is not known if the government knows about the condition of the outside world or not.


Mission Critical CM:
Nova Corps is exclusively dedicated to the development of cybernetic facilities throughout Semile and beyond. Our expertise is focused on rapid delivery for our customers; from conceptual design straight through to a commissioned, world-class business. We create cybernetic parts for those that are injured and we do the top of the line genetic research into cures for diseases and illnesses.

WE SUPPORT OUR MILITARY

The government needs state of the line cybernetics to help deal with illegal operations that have been going on recently by rebels. All cybernetics are created with the most up-to-date technology available from the labs. Parts are made with a new, light-weight and durable Kevlar. Wiring has been replaced with fiber optics.

Method of Creation: Nanites. The atom-sized robots make the fusion of metal and body more accurate and efficient. The parts are almost perfectly interlaced for fluid movement and reaction time that is just as quick as the normal human body.

Power Source: Like anything else, the cybernetic parts require an energy source to work. Advanced, high-tech lithium batteries. These batteries are rechargeable and need to be recharged only every ten years.

WE ARE FOR THE PEOPLE!

Civilian models of cybernetic parts are available to civilians. People who have been severely injured in accidents, have debilitating diseases, or birth defects can get reconstruction. Parts available are limbs, eyes, skeletal enhancements and replacements, and microchips with specific function programs for brain damaged patients

Method of Creation: Mostly surgical. Near as accurate as the nanite system as we can get, just a lot less costly for the average civilian!

Power Source: Limbs are simply attached to muscle tendons to work the same as a normal limb as far as small parts such as hands, feet, fingers, etc., go. Small model lithium are used for any parts that may require power.

Nova Corp began in Semile, three generation ago as Contractor International. Today, Nova Corps exclusively focuses on cybernetics and gene study. Having completed in excess of 6 Million sales of cybernetic parts to the household and government, Nova Corps has evolved into this new century. Nova Corp has been intimately involved with the development of the standards that establish cybernetic parts as we know them today. This has been achieved by Nova staff acting as peer review with major industry design firms and renowned corporate clientele.

Equipment delivery dates are a critical component in the success of any project. Nova Corp is proud to relay the beneficial terms and delivery dates which we hold. Nova Corps’ mission is to be The source for on-time and on-budget; Conceptual Design, and Construction Management of Cybernetic Creations and Genetic Alternation Research.

We accomplish this by merging 80 years of experience in Cybernetic Design and Construction Management expertise. Having projects managed to fit millions of square feet dedicated for research and creation, Nova Corps continually demonstrates its ability to deliver state-of-the-art cybernetic parts to our customers at a considerable benefit to cost and time savings

Status: DISCONTINUED, To be suspended in animation indefinitely

Subject’s Abnormalities:
Fingers able to manipulate the genetic structure of both simple and complex forms of matter, able to create the incorporeality and corporeality of his hands at will.
While fingers are occupying any space of matter while incorporeal, if shift back into corporeality, the matter in which his fingers are occupying will be obliterated to give way to the structure of his fingers.

Suspected to have more abnormalities to be discovered by testing subject.

3/14
The test subject seems to be much disorientated at his current situation, neither suffering from a lack of memory of what happened to him or from being deprived from food while he lied unconscious for 36 hours. Seeing how this might effect the results, the testing will be kept to a bare minimal for today.

3/27
Subject still seems disorientated. Seeing as this just maybe the subject continual reaction to the experiments, testing will continue as planned.

4/13
As the testing intensified, the subject seems to be under going a change in his persona, reacting violently to the testing one moment, then laughing at the testing, followed by complete silence. We will be monitoring the emotional impact of the testing and how it will affect the results.

4/29
He began to speak to us for the first time as he was being tested and now it can be confirmed that the subject has multiple personality disorder. Whether induce by the testing or if the subject has had the disorder before being taken in is still under investigation, though it is more probable that he obtain the disorder after the testing. Subject might be more dangerous that we had projected, while jumping back and forth within his personalities, the subject made various threats on our lives. Though there is nothing to fear, security has been increased just incase something unexpected happened.

5/23
The test subject killed one of the guards taking him the testing room. The guard had his throat seemingly torn open. Judging from the impact and direction it was torn, it suggest that it was torn from the inside out. The test subject was quickly subdued and sent back to his cell. The subject may have more interesting abnormalities than we expected from him. We will intensify the testing to see what he is capable of.

10/1
After accessing the cost, in damages, the lives of both the scientist and guards, Nova Corp. has decided suspend testing Subject # 2 until further notice. Nova Corp. has decided to go another direction for now, but Subject # 2, after accessing his great potential, will be put on hold instead of being destroyed. We have great hopes in revive the Subject when we are better equipped to handle him. 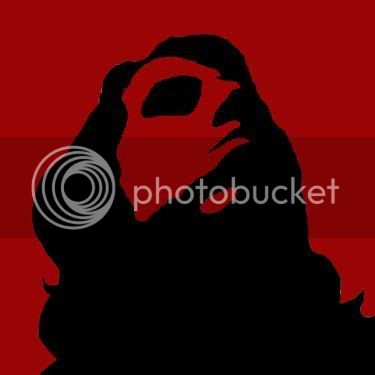 I AM THE PURIST, NON-CONFORMIST, JADED SUB-HUMAN TERRORIST. FROM THE FLESH TO STEEL TO BLOOD TO BLADE I FIGHT TO EXIST. A RIVAL TO FARCED JUSTICE, EXTREME RUSH OF HATRED, I SURVIVE IN A WORLD WHERE NOTHING IS SCARED.

DEATH TO THE FOES!

WE ARE DANTE, THE MISANTHROPES, THE BROTHERHOOD!​

The government of Semile is based on the concept of Meritocracy. This is a system of a government or other organization wherein appointments are made and responsibilities assigned based on demonstrated talent and ability of a citizen. Full rights are only granted to those, whom have willingness to sacrifice themselves in the common interest of the nation.

According to official papers from the Ministry of Information, itself: The democracies of the 20th century, collapsed because "people had been led to believe that they could simply vote for whatever they wanted... and get it, without toil, without sweat, without tears. No one can stop anyone from pursuing happiness, but life and liberty are said to exist only if they are deliberately sought and paid for."

Suffrage belongs only to those willing to serve their society by two years of volunteer Federal Service in any of the Armed Services — "the franchise is today limited to discharged veterans only" instead of just anyone "...who is 18 years old and has a body temperature near 37°C." The Armed Forces are required to find a place for anyone who desires to serve, regardless of his/her skill or aptitude (this also includes dangerous non-military work such as serving as experimental medical test subjects).

Registered Citizen/Unregistered Citizen:
A differential classification for residents of Semile, established by the First High Priest as a means of regulating resource distribution amongst the residents. Registered Citizens are officially sanctioned residents who are able to receive healthcare, schooling, welfare, and other amenities from the government.


In summary: "The noblest fate that a man can endure is to place his own mortal body between his loved home and war's desolation.” 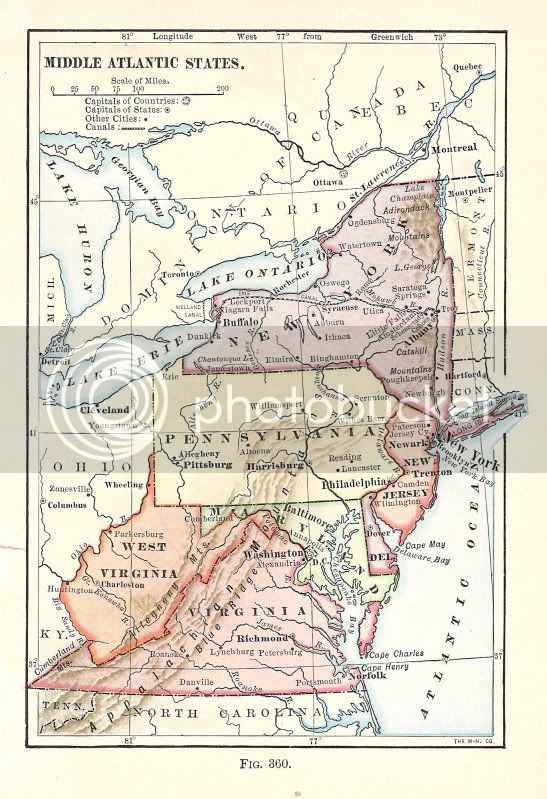 Semile is a relatively large nation that has access to the sea and her boundaries extend as far north as Lake Champlain in what was once New York state down to the wetlands of Virgina; which would make up most of the Mid Atlantic states, where most people lived in the former United States. That's an extent of roughly 600 miles North to south. The natural boundaries of the Appalachian Mountians and Cumberland River make entrance from the West difficult.

The only region not controlled by the Semile government is the small strip of land near Hampton Roads called Norfolk.

The capital of Semile extends from Washington DC northwards past Baltimore, Dover, Trenton, and into New York City. This is a metropolitan region of about 320 miles.
Show hidden low quality content