The Pokemon Burst has been perfected, after many long years of strife and casualties.

The Pokemon Burst is the ability to morph into a Pokemon Hybrid, with the use of a special stone, called a Burst Heart. Originally, these stones were mistaken for evolution stones... But when the scientific community discovered that they were different, an investigation was deemed appropriate. These Burst Hearts were stones of all different shapes and sizes. No one quite knew where they came from. Until it was discovered that when a pokemon died, if that pokemon wished to give its power to others, then a Burst Heart would form. Although of immense power, no one quite knew what to do with these mysterious stones, until the son of a laboratory head transformed using one.

Yet, a rogue scientist stole a great amount of Burst Hearts and fled. Although the government scoured the region and world for him, he was found later, after the uprising of am evil team called Team Facultus. He was merely a pawn, and it was his body that was found. Team Facultus had many, many people capable of using the Burst Hearts, thus, the government of the Seta region called several more volunteers in, in order to fight Team Facultus. These people have been trained harshly, but by now, are able to use their Burst Hearts effectively.

The fate of the world rests within their hands.

This is a Pokemon RP that revolves around the use of the Burst Hearts. When transforming, those who use Burst Hearts can become stronger and learn new moves just like regular pokemon. They also take on those pokemon's physical attributes and their outfits change [kind of like magical girls/boys]. Those who can use Burst Hearts may also evolve as well.

Original poster
Hello person!~ Well any who, I'll get the character sheet ready!
Question, At max, how many Burst hearts may we have on us? Not including the main.
Also, I'm taking that there are no legendary bursts?

Original poster
2 at most!! sorry for not clarifying.


Special Features?:
Kentaro Mega Gallade burst mode are the definition of noble and elegant, in this mode he wore a royalty suit along with cape but the main point of all is Gallade's rapier and the mohawk helmet. Color wise, it's really bright and vibrant, the White-Red-Yellow that painted the clothes matched really well but you can't never tell a gallade without his green helmet.


to have a better imagination of the costume here's the pic: 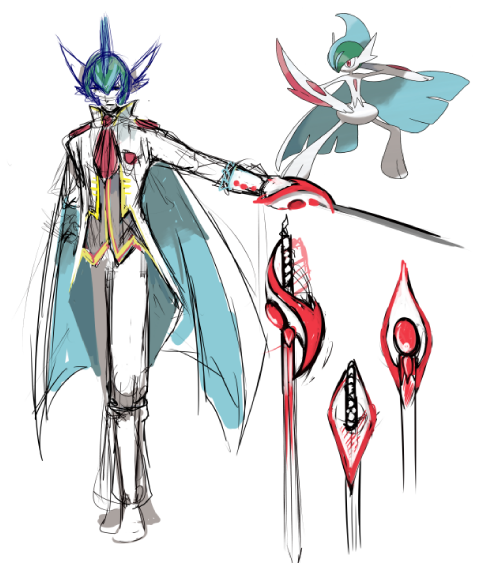 Fighting Style, if Burst Heart:
Kentaro in Mega Gallade are more to physical damage then on the rear side, the rapier give him the agility boost enough for an agile attacker. With the addition of psycho cut that gallade are proud of, he will have some mid range ability to fight with. His sword dance could be used to enhance his battle power but Kentaro though it was stupid to dance with a sword prior battle an opponent.


Special Features?:
Kentaro wore similar clothing as mega gallade the only differs from them is Chesnaught's costume are full of fur and chesnaught's pilot like helmet. The weapon that Kentaro uses is a semi baton dagger which it's a hybrid of baton stick and dagger. 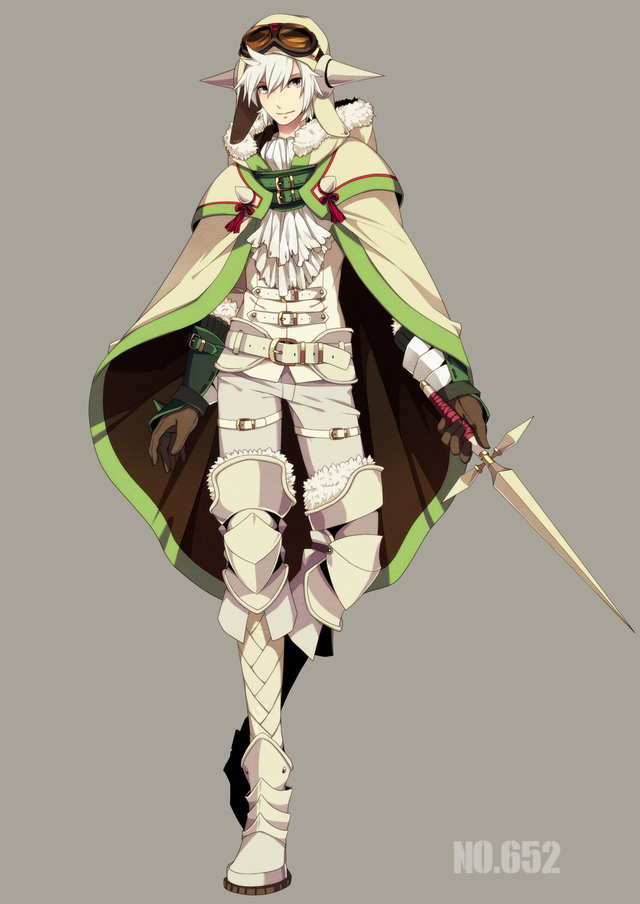 Pretty much what he usually uses, it's more agile than Gallade but lean towards supporting role, the baton dagger are more a like a magic stick then being a dagger. He can uses Substitute to fool his opponent, or to disguise as someone.

Personality:
Personally Kentaro is an egoistic man with no sense of humor nor knowing any pride, he'll take what he wants and throws what he hate. With the lack of social, he might seem to be rude at first but he's only a childish noble that live up only by his family name's 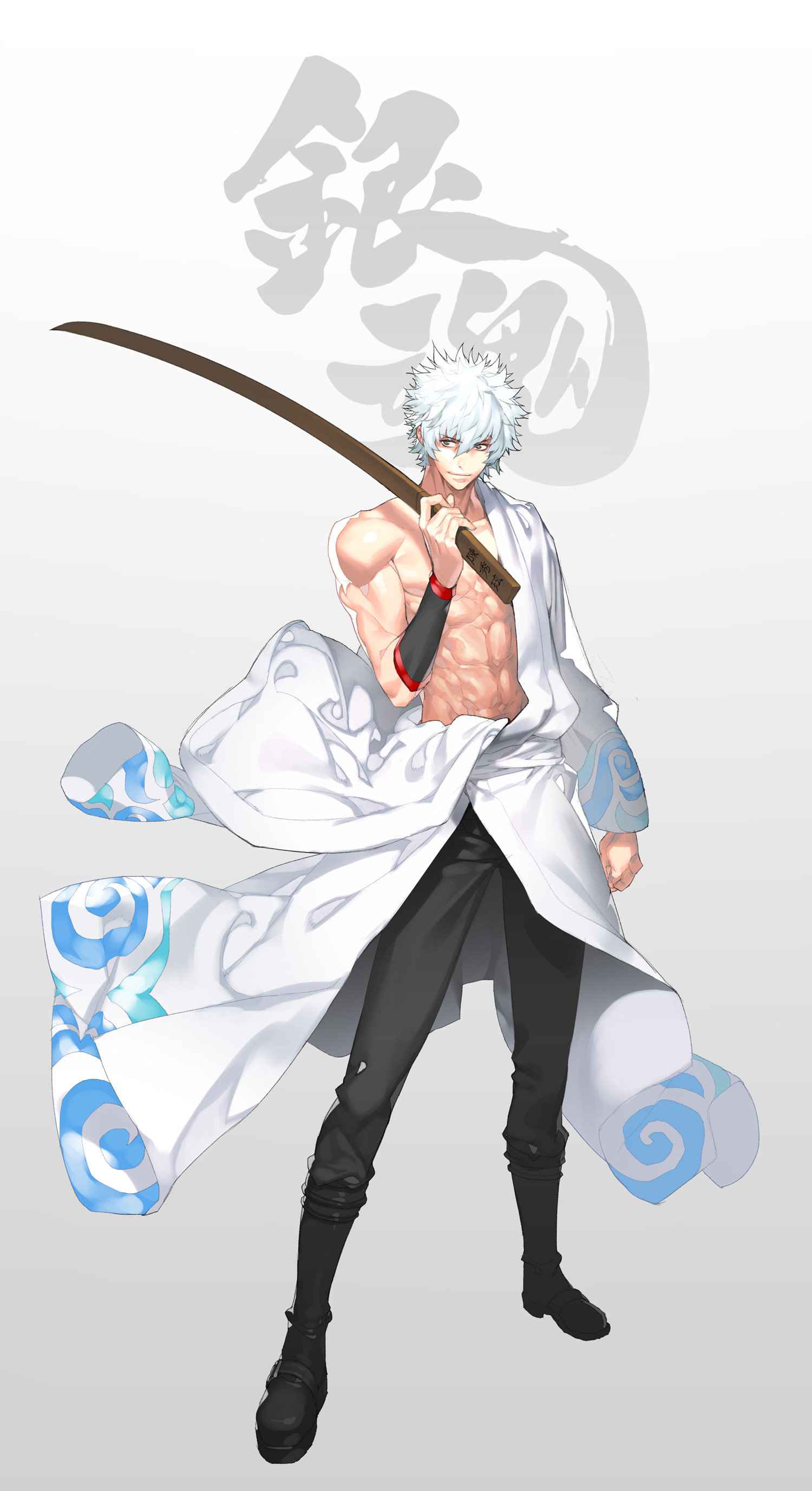 History:
Born and raised in a highly well known family, all this time Kentaro spent his life alone at his home. Unlike other child, he was raised to be one of Kobayashi's heir but it wasn't a new news that he had always hated his father to forced him into study and that's why he had always hate anything that related to education. Several years ago, he managed to slipped up the security and went to an adventure alone with some of his father money that is.​

Special Features
She retains her own appearance, however, her dress will turn into something resembling a tutu, and she will be wearing mainly white with a green veil that falls down the sides of her head, and her hair also turns green in order to resemble a kirlia more. There will also be red horn like things sticking out, and her appearance may shrink a bit to fit that more of a Kirlia's. There is little to no resemblance, with the exception of her physique.

Fighting Style, if Burst Heart
She mainly relies on using psychic abilities, preferring not to go close ranged. She also enjoys tricking and deceiving the opponent with her moves and abilities, her ability being trace. She will usually start off with a status inflicting move (Confusion, Hypnosis, Toxic, etc) or she will use a different move in an attempt to confuse the target (Double Team, Teleport, Charm, Attract, etc). She is a good balance between support and offence, as she hold the ability to use heal pulse. She is usually running around, as she barely uses teleport with the sole exception of escaping the target if she were alone. Her defence isn't the best either.

Special Features
Surprisingly, very high beauty. When she activates the burst, the Feebas will give her the form of a chocolate brown dress, which appears ragged and she is also given the terribly ragged fins and gills. Despite being so terribly ugly as a normal feebas, it looks much more appealing as opposed to other Feebas bursts. She will shrink a little bit, due to Feebas originally being a stuffy pokemon. There is a much more larger resemblance, taking into account of her hair colour and her physique.

Fighting Style, if Burst Heart
Although all around useless, Feebas can act as a pretty good shield and support, special defence wise at least. She is able to use Light screen and Rain dance, thus giving water types an advantage. She is able able to swim in any type of water, as Feebas is known for being able to do that. She is also able to use mirror coat, almost completely obliterating the idea of using special moves against her. It's a shame that just one physical move can knock her out cold though.

Other
Despite having these two pokemon, her special defence, speed, and special attack are pretty decent, however they both share the common trait that they do not do good around physical attacking moves, both pokemon originally having a considerably low defence.​
Show hidden low quality content