Plot Challenge: Stranger in a Van


Challenge Phrase
"Stranger In A Van"​
A

The chick in the van was a stranger to you. But when a hot chick drives up and tells you "Get in - your life is in danger!" your libido kind of takes over. Or it did last night, anyways. And look where that led. Now you don't know where you are, and neither does she. It's looking to be a long drive home.....
A

While saving a mysterious stranger from certain doom, Stan was doomed himself. His life is now bound to the stranger's unmarked van...he can never stray from it's side. The moment he does, he dies. Stan doesn't want to die...but he doesn't want to live eternity alone. During his never ending days he longs for company...Having a sweet-tooth, one thing Stan loved about the van was that it came stocked with candy. Offering pieces to strangers in an effort to ease his loneliness, Stan has unexpectedly turned himself into a lifelong suspect on the run...will he ever be free of his curse? Only time will tell...
B

A genius boy around the age of twelve is kidnapped by the government. He is trapped inside a van that appears normal on the outside, only to realize that this van controls the entire city. The government explains to him how the city is now in danger as a terrorist threatens to destroy it. There are a few problems. This terrorist might be the stranger who kidnapped him and is working from inside the government and he's been injected by a government test known the inhuman serum. Meaning, this person has more than brains. Can this young boy save the fate of his city or will he be swayed into the side of evil?

It's a phrase taught to every child from the moment they can talk coherently. Don't talk to strangers. you never know who you can trust.

But this little girl knew who you could trust, and the stranger in the van with the puppy and candy was not one of those people. Good. The evil ones were always the tastiest. Something about them was just so delightfully bitter, not tainted by the sweet kindness that was present in almost everyone else's flesh.

And it was her turn to bring home dinner.
Reactions: PoetLore and Diana

Darren ended the call with a swish of his finger as he left his office and headed for his car. He picked up the milk and eggs his wife had asked for and turned into the driveway. Parked in front of his house on the street though, was an odd van, painted in desert camouflage. He looked at it as he watched the garage door close.

"Grace?" he called as he set the bags on the kitchen counter, "Who's..." he stopped when he noticed a strange man sitting in his dining room.

Grace smiled, "Darren honey, this is Lincoln. He ran out of gas and needed to use a phone and the bathroom."

Darren eyed the man suspiciously, "I have a gas can in the garage I can fill you enough to get to the station for a fill up.

Lincoln smiled, "No need Darren. Triple A is on the way with a fill up. Grace was just being kind and keeping me company and feeding me while i wait. You're a lucky guy."

Darren felt the short hairs on his neck standing on end. He did not like this one little bit. there was something about this guy that was rubbing him the wrong way.

Lincoln stood up and stretched, "You didn't happen to see triple A when you drove in did you Darren?" he asked and then without warning shot him in both knees. "Sorry Darren, can't have you following me."

Grace screamed but Lincoln covered her mouth, "You now...you are coming with me...I like you. We are going to have fun the two of us."

Darren was frantically trying to get up but his knees were gone. He watched helplessly as that stranger dragged his wife out to the garage and had his good time with her and then shot her. He had left his phone on the counter with the bags and couldn't quite reach it. Once Lincoln had left he started throwing things up until the phone fell to the floor. It fell a few feet from him so he dragged himself over to it and dialed 911.

The operator had help quickly dispatched to them but not in time to save his wife. Why the man had chosen to kill Grace, but leave him alive was a mystery to him. Several weeks passed and the police had no leads on the man in the van, but Darren received a letter from one state over.

Hope you legs are recovering alright. Hated to do that to ya man, but you weren't supposed to get home that fast. I was just there for Grace. Wasn't paid to kill you.

Anyway. She was a nice ride. You had it good. I'm sure there's more like her out there for ya. Take care.

He wasn't paid to kill him. Who had paid him to kill Grace?
Reactions: Diana

"Get in," said the stranger in the van.

"It wasn't a request. You need to get in the van."

"I think not," she replied, her feet rushing down the sidewalk now.

"It's really not a request." This time the van stopped and the driver hopped down out of the seat rushing around and grabbing Jennifer by the shoulders. "You're being followed you stupid girl. You can accept the ride, or you can deal with whoever those guys are a couple blocks back. And they don't look so nice."

Jennifer's heart was racing. She glanced over her shoulders and sure enough there was a group of men loitering just a couple blocks back. They'd stopped moving as soon as the guy in the van had stopped her. She swallowed hard and reared back, kneeing the guy in the crotch before taking off down the street. She ran and ran. The sound of footfalls came from behind her. Someone was gaining, but she was too scared to look back. Her house was just in front of her. Just a half a block longer. She put her head down and pushed hard. Her feet slapped against the sidewalk as she all but flew down the street.

She made it to the porch before everything went dark.
Reactions: Diana 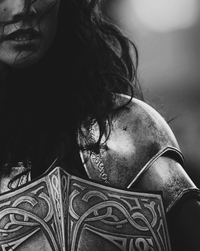 You groan as you cometo, head throbbing and vision blurry, what exactly happened? One minute you were minding your own business and then next thing you know...

As the world slowly rights itself, you find you're in the back of a van with the windows painted over. The dim light overhead shows you that you are not alone. About seven other people are crammed into the back with you, all in various states of semi-consciousness.

You're about to ask the person next to you what on earth is happening when a static voice interrupts your thoughts, "Attention Task Force B, you have been selected for a special mission. Under your seats, you will find a bag with all the items you may need to complete the mission. You have 24 hours."

The van stops suddenly, the back doors flinging wide blinding you and your comrades with the sudden light.