CATEGORY: This week, the category is WEIRD-WEST. 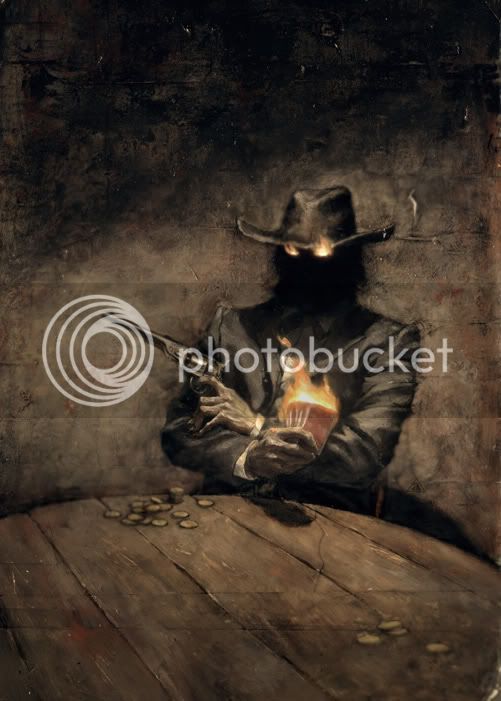 Next week's category will be PIRATES.
S

The demon's eyes burned with rage as his card turned to ashes in his hand. He tightened his grip on his gun. How dare this punk try to cheat him? Gold coins piled around the table, glinting faintly in the fire's light. The brazen brat grinned smugly as he reached for the demon's own pile of pieces, ignoring the uneasy shifting of the bar's other occupants. The demon moved his gun until it pointed straight at the young brat's heart. The man stopped, his smile cracking a bit. "Go on," the demon said slowly "I'm only stretching my arm. Take what you've earned." The man sneered, reaching greedily for his prize. The other drinkers turned their gaze away from the fool, knowing his fate was sealed. Taking this as an encouragement, the man grabbed the demon's gold with lust. A loud bang echoed throughout the bar, followed by silence. The man slumped over the table, a crimson pool leaking from his chest. "I believe that should cover everything," the demon growled, "Including the extra aces up your sleeve." He stood up and grabbed the man's collar, throwing him out of his chair and unto the floor. "We should play again sometime," He continued, his eyes dimming back into their usual blackness, "Just be careful not to color the pieces again. I like my money clean, not red."
Show hidden low quality content
You must log in or register to reply here.
Share:
Reddit Pinterest Tumblr WhatsApp Email Share Link
Top Bottom