CATEGORY: This week, the category is STEAMPUNK. 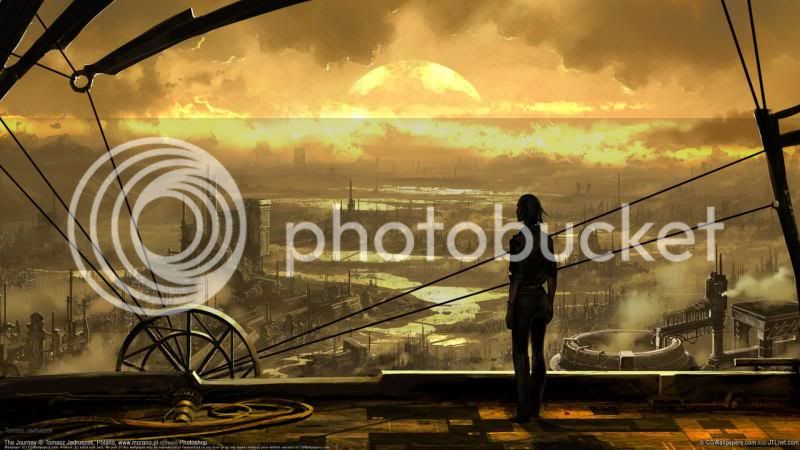 Next week's category will be MEDIEVAL.

((this is actually an old plot of mine that i've tried in different places but it never quite got off...))

Life is a giant cycle. We are born, we die, and we are reborn. Or that's what common religion has us believing. The earth has undergone many metamorphoses and changed so much over time. Now, it is undergoing yet another metamorphosis. Time has collided into a mixture of past and future where steam and clockwork is the main form of outlandish power for technology. We are entrapped in a time of Victorian elegance and futuristic lore. Welcome to the Steampunk Era of the 32 century. The current year is 3152, and the frontiers of our world are expanding. Already the world is starting to see new cultures, subcultures, and species flourishing on our home soils. There is talk of experiments to travel into the deep reaches of time and space as well, but surely those are just fictitious ramblings of delusional men? Man and machine are finding new, exotic combinations, and 'magic' in the form of alchemy and other natural arts, for the last few decades, has resurfaced in select colonies, subcultures, and individuals.

The world is certainly coming back around, but with a great change comes the search for great power. The rich who hold the money are often seeking ways to monopolize power and gain even more riches at the expense of lower others. Social rifts are often found to occur and revolution is never that far from any one horizon! Time must move forward as we pave the way for the future through war, corruption, corporation, revolution, and above all invention. The mind is the limit.

Whether you're from the large bustling city, or the small secluded country, you've probably heard rumors of The Forgotten Technology. They say that long ago before the world reverted back to where it is now, there were great technologies that ran on electric power and complex computer based science. These marvels helped drive our world forward until the Nuclear War that wiped everything out again. The world had nearly been destroyed. Those who were fortunate to survive that great catastrophe were more than happy to keep this simpler, peaceful life that now exists. They dare not share the secrets of the technology from long ago for fear of another nuclear age.

With the ever present urge to discover new things and advance our world, as the human species still has the drive to move forward, government and large companies will go to any lengths to find new or old technologies. Thus a great industrial revolution is on the horizon. The hunt for the latest and greatest thing will be the new trend, and those who can find and unlock the secrets of the forgotten technologies would be well ahead of the game.

The current societal goal: manufacture the latest technologies and hunt for the legendary forgotten technologies that might still exist. These lost technologies are a treasure hunters dream, worth possibly millions if sold to the right person! So the search will begin. It is rumored that far off in uncharted lands there was a man that had indeed discovered one of these forgotten technologies, and even began to unveil some of its hidden secrets. Alas, he long ago vanished and has never been seen or heard from again, but it's said he did leave a map behind. Only problem is, no one knows what happened to that map.

So how far would someone go in order to attempt to get their hands on a map that may or may not lead to the find of the century?
Show hidden low quality content
You must log in or register to reply here.
Share:
Reddit Pinterest Tumblr WhatsApp Email Share Link
Top Bottom