They say that a picture tells a thousand words; our Picture Challenges see how many words our members can tell from one image. Given a random picture or piece of art selected from a different category at random (Fantasy, Sci-Fi, Medieval etc.), members are challenged to come up with a character or story concept derived from the image. The concepts can be serious and heavily-planned out, or they can be light-hearted and silly; it is entirely up to the member. The point is to see what you can interpret and develop from an image. Don't be afraid to jump outside the box with your ideas; this is an exercise in creativity.

It's never too late to do any of the challenges; you are very welcome to go back and try the older challenges as well as the new ones. Feel free to take ideas and concepts from this challenge and put them into your own roleplays; all we ask is that you give some credit to whoever came up with the idea.

PICTURE CHALLENGES IN THE BLOGS
Once a week a Picture Challenge in posted in the Iwaku Community blog by a staff member.

PICTURE CHALLENGE GAME IN THE CBOX
On slow nights, a staff might run a "game" version of Picture Challenge. Then post the archives/results up in the blog.

NOTE: Feel free to respond to this challenge at any time; new additions are always welcome. Should you use some of the concepts and ideas posted in this challenge, please give some credit to whoever came up with the original idea.

CATEGORY: This week, the category is SCI-FI. 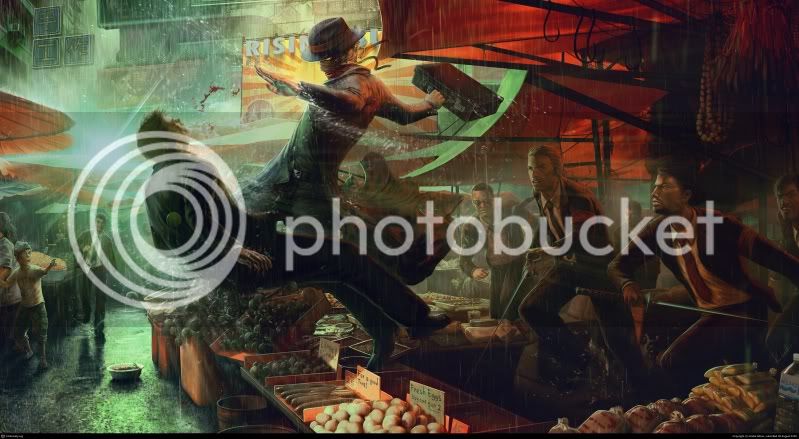 Next week's category will be HORROR.
A

((alright it's not as good as my other one...but i like the concept >3 and the character could use some work but i'm tiiiired haha so here ya go))

The year is 2175. Earth is a dark place full of corruption and greed. Long ago Eastern and Western cultures merged into one mega-culture in order to tap the earth of every resource that could be found/utilized for human kind. The result was a huge increase in technological gains, but the depletion of a good majority of earth’s natural resources. However, natural can always be replaced by synthetic right? With the earth virtually uninhabitable without synthetic modifications, biodomes have been created to house humans. There are currently 10 biodomes created. A large central dome acts as the capitol and 9 smaller domes branch out from the central dome connected by extensive tunnel/tube systems. As it stands, to go outside the dome system would mean certain death for any unprotected individual. Or so the grand council will say. The Grand Council stands in as the main abiding government of the earth and is made up of the head officials (and their confidents) of each of the 10 biodomes. They meet in the central dome to discuss matters of political importance, and keep a close eye and tight rule on the dome systems. From chaos must come order and from order must come respect. Furthermore, each of the 10 domes seems to run on some common theme whether it be an ethnic one or some other theme. One such theme is found in the Lazarus dome.

In Lazarus, crime rates are high and it is seen as a place for the riff-raff and nobodies to wander to. A sort of lower end system of living, mafias are quite common and quite good at paying off the greedy local officials. Greed and corruption are two individuals who have a good hand in the way justice is delivered in the streets of Lazarus. However, the current official of Lazarus (Warren Bigalow) has been the popular elect four years running. His current rule he’s vowed to turn the city around and decrease crime rates and dismantle the mafia turf wars. However, it doesn’t mean he can’t still be bribed to ‘turn the other cheek’. Though most people go blissfully about their normal days accepting this as the best there is, not everyone is on board. There are those who see through the madness of the way Warren is running the city and wish to change this. An underground organization known as the Talemasca have been working secretly for years to try and overthrow Warren and show the Grand Council what is really going on in hopes of bringing better lives for those living in Lazarus. But, Warren remains with the upper hand thus far.

The tables may turn in favor of the Talemasca, though. It is rumored that Warren keeps a briefcase close to him that may hold important documents that could lead to his downfall. The Talemasca have been trying to obtain this briefcase for months now. They’ve lost some good men and women in their attempts. For their final attempt, they’ve sent in one of their best operatives, Daren Wolf, codename Grim Reaper. The best of the best, Daren will go to any lengths to complete a mission. Daren is a 32 year old male in impeccable physical and mental condition with blue-gray eyes and dark brown hair that is kept in a short style, and bandages around his face and back. Before joining the Talemasca, Daren worked for a company called Rising Sun Industries which delved into various odds and ends. Daren had a good life. A well paying job, a loving wife of three years, and a young daughter who he adored to no end, life was good.

Rising Sun was looking to expand their interests and opened a branch in Lazarus, partnering with Warren Bigalow himself. Daren was sent out to work at the new branch as an important member of the department. Bringing his family with him, and given a house, things were good…for a time being. His wife didn’t like the high crime rates in the area, but she supported him either way. She loved him. Now Daren was a good man, and a brilliant business man, but he wasn’t without his faults. One vice of his was gambling. Lazarus just happened to have many areas to gamble (due to the population). For a while things were alright. He’d only gamble a little and would usually win. One particular night, after closing a huge business deal, he decided to celebrate. The result was him getting pretty drunk, and losing a good chunk of the money from the deal, which wasn’t his money to lose. Finding himself in a bind, he went to Warren to confront him and straighten things out. Considering the circumstances, Warren seemed to take things well. After a few thrown punches and some bargaining, Warren decided to give Daren a month’s time to get the money back. Plenty of time.

Now Warren likes to make deals and likes to think he’s a good man, but he’s a rather impatient man, especially when it comes to money. Despite giving Daren a month’s time to regain the money lost, he was growing impatient. Daren had been well on his way to getting back every cent lost, and would have made it in the month’s notice if he’d been allotted the amount of time. Tired of waiting, Warren decided to simply teach Daren his lesson and get it over with. While Daren was away at work for the day, some of Warren’s men broke into Daren’s house. Murdered his wife and child, and set the place ablaze. The insurance due to him from the damage would be enough to finish the debt with what Daren had already paid him back.

Upon returning home from work to find his house ablaze, Daren mindlessly ran inside to search for his wife and child. Finding their charred and murdered bodies, something snapped as he simply shouted “we had a deal!” over and over. Distraught, he barely made it out of the house alive, having to be pulled out by a firefighter. He suffered 3rd degree burns over his back and face, but he survived. And he survived with a deep anger and vengeance toward Warren Bigalow and the way he ran things in Lazarus. When he was discharged from the hospital, he began to train himself to become a perfect assassin so that he could take down Warren himself. 3 months later he found his way to Talemesca and joined their ranks, quickly rising to become one of their best operatives. He’s been with them for only a year and a half now.

Darens current mission is to retrieve the briefcase in question from the possession at any costs. He’s prepared to kill if he has to in order to complete his mission. Once in possession of the briefcase he is to rendezvous with another Talemesca agent and drop off the goods. So, his mission began…
Show hidden low quality content
You must log in or register to reply here.
Share:
Reddit Pinterest Tumblr WhatsApp Email Link
Top Bottom