CATEGORY: This week, the category is POST-APOCALYPSE. 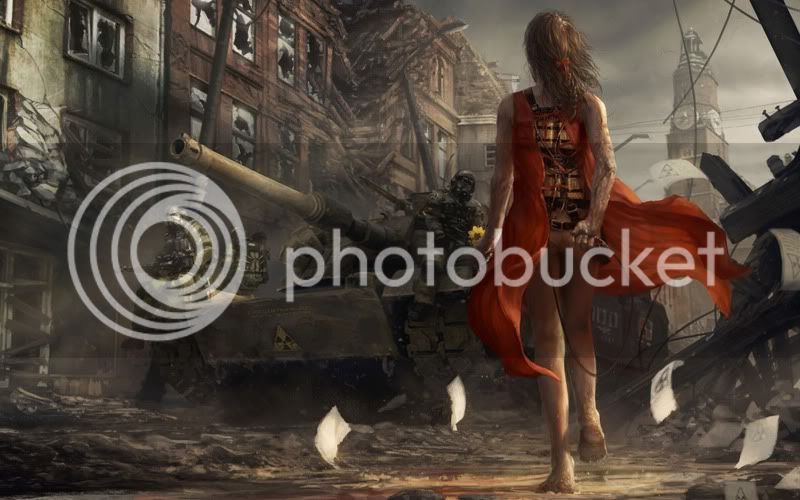 Next week's category will be WEIRD WEST.
A

Childhood memories. Children's voices sing. 'Ring around the rosy/A pocket full of posies/Ashes, Ashes/We all fall down'.The pure laughter of old echoes around.Truly, all childhood innocence has been lost. But, this is of our own doing. Each day, we must live with the consequences of our actions...

A child's body lies now writhing on the ground, blood gushing from the open wound, teeth and limbs thrashing.

A bullet through the brain. Silence, and stillness as the soldiers move onward. We cannot be too careful. It is better to make sure that the children stay down. They are the biggest threat to our survival. They are the infected ones.

The world has gone to hell in a hand basket, as the old saying goes. No one is quite sure where this all began, or why, just that it did and now here we are. Survivors in a world that should be dead. The natural world is almost unlivable. Natural vegetation is scarce and most wildlife have either become extinct or mutated. Those humans who have survived, for the most part, live deep underground in bunker cities. However, there is a small percentage of survivors who refuse to go underground and shack up topside (as the bunker dwellers call the place we once all lived). Oh, I seem to also have failed to mention that the remaining 'human' population consists of young adults, adults, and elderly individuals. The children of our time were unable to be saved, and only a select few females even have the ability to conceive anymore. Even then, the likeliness that the child we be born and not become afflicted is only 90%. The youngest person now 'living' (that's known of) is 13.

So, what happened to the children, you might ask. Well...whatever started all this took hold of the young ones right away. It didn't kill them and bring them back to life, it didn't make them into blood thirsty vampire-like monstrosities, and it didn't simply wipe them all out like all those old sci-fi movies used to predict. It isn't even certain if it was some sort of virus that took hold...or something else. All that is known is that children around the world were becoming inflicted by this strange ailment. Small behavior changes would be noted until the child would outright become catatonic. Either they'd become completely motionless like a statue, or completely irrational, wild, and uncontrollable. Their eyes would take on a glossy appearance as they would start to attack whomever was nearest for no reason. For a bit they'd come back for short periods, but over time once the behavior changes happened, it was all over. The child became permanently afflicted and could no longer be controlled.

It was during the irrational fits that the children became most challenging. It was as if they were endowed with unknown performance enhancers. They were a hazard to others, and they themselves seemed impervious to harm in a natural sense. Nothing mattered, just that they let this built up energy loose in any way possible. Whether upon themselves or upon others (though mostly it was against others). It was almost the equivilant of watching the child turn into a 'flesh hungry' zombie.

Then, the blaming started between nations as to the cause of all this. This lead to eventual nuclear war, and world contamination from the fallout. The world was a forgotten shell, and those who had survived the aftermath deemed the children unfit, unsafe. They were no longer children...they would more likely kill the parent than bargain with them rationally. And women were becoming infertile from the radiation levels.

As the adults fled, the children were left to fend for themselves. They began to form their own communities, calling themselves the Lost Children (similar to the Lost Boys from the old story of Peter Pan), and began to survive off the land in any way they could. No one is sure if it was the continued progression, or perhaps the addition of high levels of radiation pools, but the children's fits became more and more violent and more frequent to the point where they were monster-like. However, they still retained some sense of lucidity during select periods, which was what allowed them to create the communes. However, you can imagine that the children were not happy that they were simply abandoned, and thus they try to attack any adults they see (not trusting any).

Solders are sent topside daily on scouting missions to try and find a 'cure' for whatever has happened. However, the children continue to attack, and now only wish to wipe out the adult population for their deeds. So the battle rages on, but with more people dying and very few possibilities for reproduction, times are hard. Each death sets us one step closer to our own destruction. Yet, the war rages on between adults and children. What a world we live in. Innocence is lost, and morals are questioned.

Hush a bye baby, on the treetop
When the wind blows, the cradle will rock;
When the bow breaks, the cradle will fall,
And down will come baby, cradle and all
Show hidden low quality content
You must log in or register to reply here.
Share:
Reddit Pinterest Tumblr WhatsApp Email Share Link
Top Bottom