Original poster
DONATING MEMBER
FOLKLORE MEMBER
NOTE: They say that a picture can tell a thousand words; this challenge aims to see how many words our members can tell from a picture. Each week an image relating to a certain genre shall be posted, and members are challenged to see what sort of plot, character or idea can be developed from it.

CATEGORY: This week, the category is PIRATES!
And so without further interruptions... 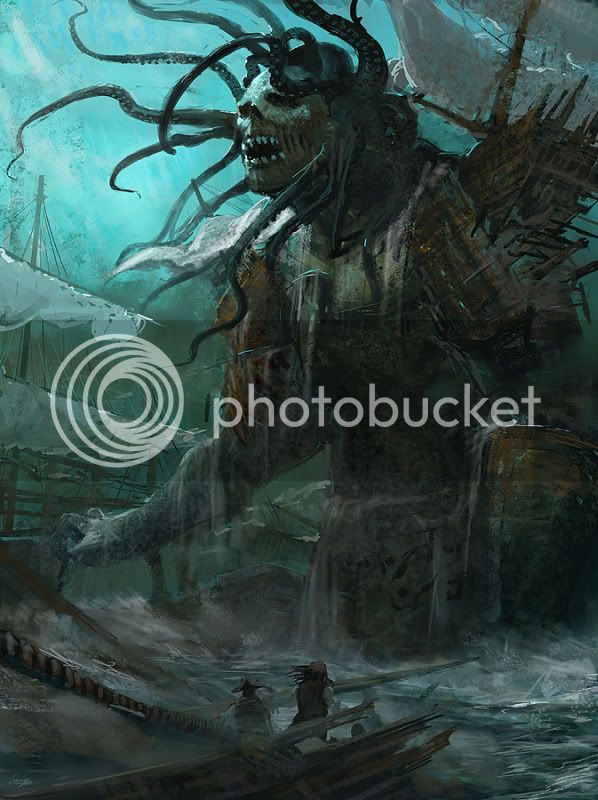 Next week's category will be DEMONIC.
I

FOR RUM AND RICHES

Raging roaring bloody seas. That's what Greshim saw every minute of the day. Every single waking minute of his life was spent on a teetering vessel that crashed through waves and docked for nothing but rum. All in all, it was worth it for the two pirates. Greshim and Barmuke, two of the...least notorious pirates that ever sailed the Sea of Rondrom. That was fact left a salty, sea like taste in Greshim's mouth. Barmuke was mute, so he could not much speak out on his thoughts about their reputation, but Greshim was going to do it, damnit.

"We are sailing the same circle of chops for what reason, Muke? For no reason at all, I tell you! There's nothing in this bloody Rondrom sea to make us lay waste of our time for! How I ever convinced you to let me do this, the waves will tell!"he said in his Australian slurs. Greshim spent his time manning the mast while Barmuke took his hand at the wheel. For a mute fellow, Barmuke was really quite lively in his doings, tapping a beat against the mahogany wheel. If Greshim could read minds, he could tell that Barmuke was probably giddy of what richest lay await for them if they find the entrance to Rondrom Caverns. The Caverns were heard to be in the deepest and darkest part of the Rondrom sea, and was said to be guarded by The Great Beast. Not much of a name, but the rest of the pirates did savvy the stories. The tale did speak of riches, and for two pirates with the reputation of a common pier walker, those richest could make them powerful among their wildest fathoms.

But first they had to find the bloody thing.

Barmuke spun the wheel to something of a 45 degree left turn and Greshim neither opened his mouth to protest nor bothered to question his methods. The waters were growing kinder to their ship the Anthem's Peak. With all of the pish posh stories of the Great Beast, one would imagine roaring tidal waves as high as the lips of the sky with never ending rain fall for days on end! All the two pirates saw was sun rays and waves lapping against the bow.

"My friend, what say we turn around back to port, eh? We have all the richest we want there. Rum, women, and land. I say that's a great idea than sailing the seas endless like." Greshim grumbled. Barmuke responded by flailing his arms wildly above his head like some craze albatross. Greshim knew of the mute factor, but not of autism! He hadn't seen his companion act this way until he took to many mugs the night at the Rally and Par. This wasn't the Rally and Par.

"Muke, what's gotten into your britches?"he said. The answer ripping roar crossing the side of the Anthem's Peak. Greshim hobbled all the way to the left side of the ship on one foot, trying to keep a steady stand on gravity. The rip was more than that. It was actually a shredding of the whole side of the Anthem. Salt water splashed everywhere and Barmuke had to shield his eyes while he was being thrown backwards in the same manor. No longer was there a peaceful silence and stilled waters. Now, there was the melody of shattering wood and metal and splashes of saltwater.

"The upper deck with you!"he roared to Barmuke who nodded in obedience. Greshim and Barmuke slipped and slid over the watery footholds of the 4 stairs that lead to the upper deck. On his way there, Greshim looked out of the corner of his eyes to see a grey, cylindrical tentacle curling around the part of the ship that had been torn off.

"It must be a trick of the eye..."he said and Barmuke turned to get the same view as his buddy. He only caught a glimpse of the last suction filing back into the water before the stilled silence returned. A pitter patter of water splashed down Greshim's hat in a rhythmic beat. Suddenly, 6 towers of water sprouted from the depths once more, revealing the same tentacles...and much more.

"By Davy Jones..."Greshim was in awe at the sheer size of it. It was a grotesque thing, this Great Beast, much as it was written in the stories. It had the body of a human, or pirate rather, with the head of the Kraken. Built into its structure was the bodies of many ships that it swallowed into its being. The Great Beast took its time to open its mouth and let out a roar that sounded like 600 canons on the jam. Barmuke and Greshim goggled at the sight. Salt water and broken wood dropped like waterfall at their feet while Greshim clung tight to his hat. Nudging Barmuke, who was as speechless as ever, Greshim let out a bellowing laugh from deep within his belly. A real pirate's guffaw.

They had been out on the sea for several weeks searching after an isle which was rumoured to be hiding the biggest treasure that existed. The people that found the treasure would be the richest person on earth. The capten of the ship Black Diamond had already decided what to do after he and the others had found the treasure. He wouldn’t let his crew live after the treasure was found, he would take everything himself and use some of the money to get away from the gallows.

He had already planned exactly how he would kill his crew after they had lasted the treasure on the ship. But the problem were that they still hadn’t found the right isle and no one had lived on any of the isle they had passed, they were almost out of food so if they wouldn’t find anything soon then they would die.

“Captain” One of the men said, “How do we even know when we find the right isle? It could be any of them, there are no maps over these isle’s” He continued. Everyone that were closed started to whisper, it was true that there were no maps, there were only rumours about the treasure, no one knew if it was true.

The captain walked closer to the man, his style of walking was threatening and the man backed some steps away in fear. “How do we know?” Captain said and looked around on the doubting crowd that had been gathering a bit away. “It is said that a monster is guarding the isle and wont let anyone pass, so when we see it then we know that we are there.” The crew starred, did their captain really believe in that? They had actually just traveled out so far in to the sea just for a rumour. The captain saw that his crew was more doubting towards him than ever, this smelled mutiny long way.

“I know it because I have seen it.” He continued, the crews jaws dropped and their eyes became big. “I have been out in this waters once before but at that time I wasn’t a captain. When we found the isle everyone got killed except me and somehow I were able to get away from the beast. But I know what we must do to not loose a single life because this time I am prepared. We are close, I know it.” He said and walked back towards his cabin, leaving them to think about what he just had told them.

He fell asleep but just some hours later he got woken by a big noise, as he ran out he saw everyone running around in panic and some were in the water. The ship had broken on the middle and people on the other side of the ship were fast falling down in the water while the part of the ship that he were on still hadn’t started to sink down, but it wouldn’t be over the water for long.

As he tried to get everyone to calm down that still were around he saw the monster, the same monster he had seen so many years ago. It took a grip of the other side of the boat and threw it down under the water, the beast threw the other arm towards their part of the ship and almost everyone got throwned in to the water, some of them still alive trying to swim but they would soon drown, the others had died when the monster hit them. The captain were now alone with the last remaining crew member whom also were his right hand. The monster didn’t seem to notice them standing on their side of the ship which soon would sink down to the bottom of the sea. The monster soon disappeard down in to the sea and pulled the other side of the ship with it, the other crew members had already drowned so the captain and the other crew member where the only survivors.

They were forced to think fast, soon the part of the ship they were standing on were about to sink down in to the sea, they needed to get off of it. They put some boards together and took it down into the water then they floated on the board away from the ship, watching it as it went down to the bottom of the sea. The stream took them away from the isle that they had seeked for so long, they weren’t able to get the treasure. Luckily they were able to get to a shore half starved, they were able to get help from the people that lived on the shore. At that time they had been drifting around for four days.

Some years later the captain decided to take another chance and get a new crew to go to the isle, this time he would get the treasure. He wouldn’t let that monster get him again. If he got a good crew and this time prepared them for what would await them then maybe they could make it. <o:p></o:p>
Show hidden low quality content
You must log in or register to reply here.
Share:
Reddit Pinterest Tumblr WhatsApp Email Share Link
Top Bottom