CATEGORY: This week, the category is HORROR. 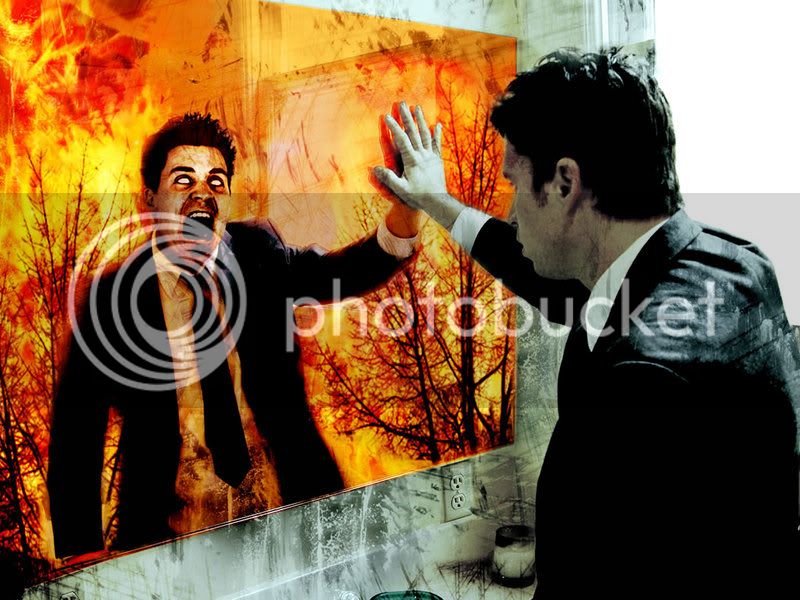 Next week's category will be POST-APOCALYPSE.

I knew it, I fucking knew it, John thought to himself as he stared at the hellish scene in the mirror before him. I knew Mirrors were actually portals to Hell. John was a financial advisor at the local bank. He was also slightly insane. Working fourteen hour shifts and doing a few hobbies on the side too really took a lot out of a guy. He had gone into the bathroom at work just after his shift had ended and he hadn't slept for the past thirty-two hours. He had also cheated several people out of their money, and ran over a small dog. As he stared at the burning image in the large mirror, he knew what he was seeing was real. Or was it a hallucination? What if this all was a hallucination? what if he was actually in an insane asylum on some island in the middle on nowhere and they allowed him to live his lie to keep him from the sweet release of death? What if he never really existed, he was all just a component of a child's dream? What if everything was? As he began to question his sanity more and more, the image reached out and grabbed him, dragging him into the mirror Hell. To John, he had literally pulled himself into the Underworld, where he would stay for eternity, burning. To anyone who walked into that bathroom after John, the would find the mirror shattered, and Johns body sprawled across the white tile floor, hand broken from punching the mirror, throat slit with a shard.
C

its us, 'run' its you 'Run' its me 'RUN' there in the mirror "dont look in the morror Kye" "I see you come to me and play" its come from the morror "what do you want" Kye turned to t morrior "stupid" the girl in the Morror said or is Kye in the morror now. everything is so confuseing. she need out she pounds on the morror hard but nothing happens she is stuck on witch side. the girl smileing at her finly shows her face its Kye she waves to her and leaves the room. Kye looks at the door out. "what there will i die" she slowly opens the door and sees..............