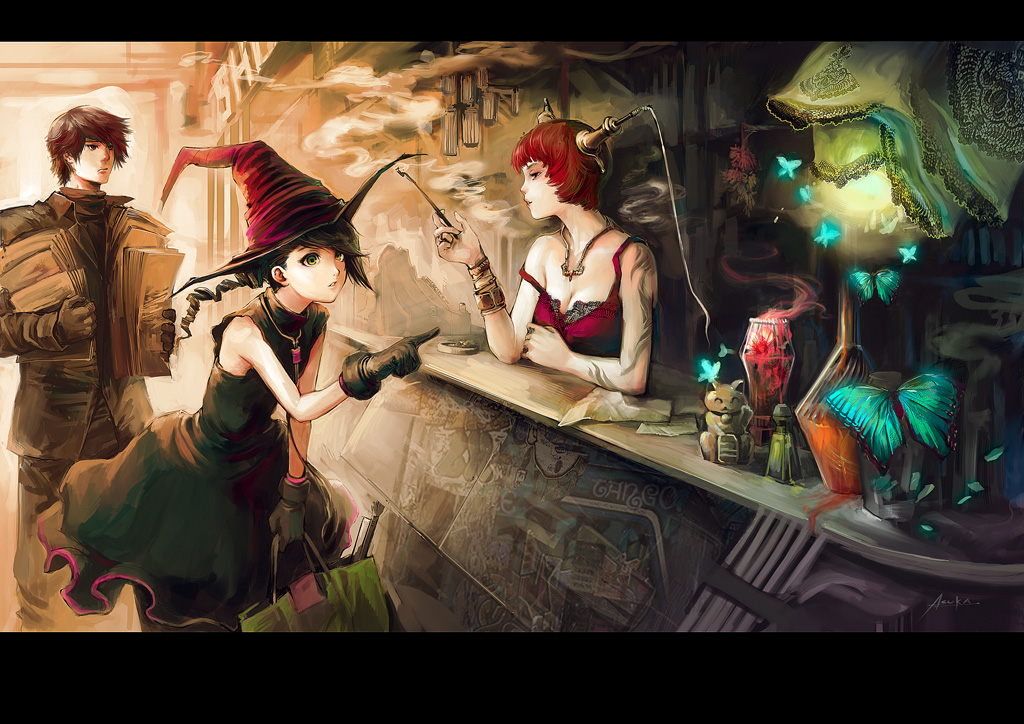 "Come on, Princess, let's go home..." Carl said, his arms heavy carrying the official parchments. The scribe was just returning to the library when his best friend - who was also the Kingdom's Princess - pulled him along in her shenanigans.

"Shush, Carl! Do you want everyone to find out? Just be quiet and follow me." Princess (in disguise) Terrana hissed, adjusting her stereotypical witch hat as she entered the Alchemy shop. "Ahem..." She perused the goods, "The usual please..."

"Oh," The shop's clerk, a rather sultry redhead, gave a knowing wink at the 'witch', "Coming right up, Prin-, I mean, Miss."
Reactions: Link Loftin, Rilette and redblood
T

Frederick burst through the doors of Jinx's Apothecary with the vigor of a much more aggressive man. Upon entering the room, Frederick's senses were immediately assailed by the strong assortment of smells produced by Jinx's day laborers and his eyes soon began to water from the intrusive clouds of smoke wafting from her pipe. He grimaced at the sight of insects scurrying beneath his feet and quickly readjusted the numerous documents weighing down his arms before blinking the tears from his eyes and scanning the smoky room for his charge. The girl was easy to spot despite her attempted disguise, her clean-cut appearance was a far cry from the rugged men and women of the Lower City. She gingerly took grasp of a vial filled with what appeared to be a thick, black liquid, the color of which matched the dress she had chosen to complete her disguise. She tipped the brim of her crooked witch's hat to better view the contents of the vial before turning around and all but freezing upon catching the glare of her displeased mentor. With his objective reached, Frederick puffed up his chest and marched up to the young girl with great haste.

"You have made a fool out of me for the very last time Ms. Hartwell!" Frederick yelled before yet again readjusting the documents in his arms, "I will not allow a young magister to go prancing off into a crude establishment such as this. It is not right!"

"Frederick, you're being unreason-"

"I am being nothing but reasonable. Your mother entrusted me with supervising your studies and rather than cooperate you have constantly confounded my efforts and shown nothing but a blatant disregard for discipline!"

The shopkeeper snickered at the man's exaggerated show of frustration causing Frederic to deflate for but a moment before glaring at the sultry redhead whom responded with an innocent smile betrayed only by her equally mischievous gaze. Switching his focus back to the young Hartwell, he quickly found difficulty in maintaining his anger. Following his tirade the young lady's eyes had widened and she was beginning to pout.

"I never meant to cause you so much trouble Ser. I was just curious about the applications of magick in a less... controlled environment and I had hoped that I might find a few examples in the Lower City."

Frederick huffed a sigh of exasperation. Hartwells were known for their ability to manipulate those around them and though she was still young, Mira Hartwell proved no different. "I suppose I can let this go but I need you to start taking your lessons seriously; the Hartwell name carries with it a long and prestigious history which you would do well to remember."

Mira gave him a curt nod, and began nervously fiddling with the pink dimeritium gemstone dangling from the end of her necklace. "I would like to finish my business here before returning to the manor if that's alright with you..."

Frederick yet again found it nearly impossible to refuse the girl as she looked up at him expectantly, eyes wide with anticipation. "Very well Ms. Hartwell, I will allow you to finish your business here and afterwards you will go to the manor with me where you will complete your studies for the day without incident", he said with half-hearted determination, knowing that his words were all but wasted.

Mira beamed at the man and threw him into a quick hug before grabbing her bag which was nearly overflowing with various magickal objects, rushing to the counter and launching into a series of inquires about the shopkeeper's inventory. Frederick could only step back and look on with displeasure as he began to wonder just how much trouble this girl would become.