Original poster
!Disclaimer!
Some of this may be long to read, If you might not be serious about this then i wouldn't start reading this further. However if your interested or even think of being interested then i recommend reading at least the whole description. To be honest you only need to read the description part, the other parts are for when we start and if you have time sure you could read further but its not required at this time. 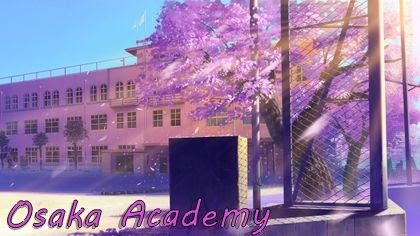 | A better Logo Image will be made Later |


Ōsaka Academy
'' Beautiful as a Cherry Blossom! ''​
Description
Ōsaka Academy is located in japan, surrounded by cherry blossoms its nickname is ''The Cherry Blossom Academy''. Although it may seem joyful and brightening appearances can be deceiving, All kinds of students have enrolled into this exclusive school to jocks to otakus. Although its not too big like other academies it is one of the best schools in the city.

Within the school it is obvious that the staff keeps the school clean as lockers are never dusty even on the top where we all know dust tends to gather the most, Floors shiny as possible and the stairs leading to B2 (Floor 2) classes can be seen straight away when looking forward when entering the school. Past the lockers you can find bathrooms on the left hallway and A1 class rooms located on the right hallway. Upstairs there are even more class rooms as it is the base of most learning, however above that is the roof, where most private interactions happen. Around the back is the pool, bath houses, and changing rooms where students can exercise, swim, change clothes, and even take showers. Around the school to the left side, leading away from the pools is the tracks where students run to perform more exercise if need be. Across the road from the tracks is the cafeteria where students go to eat and hang out. The school holds not only vast amounts of different students but from the ages of 13 - 18, Teachers can be 16 - 19 but not anything over 19.

The class rooms are in basic japanese appearance, right wall from the black board is full of windows, left wall are two exit doors located in the front and back of the room, traditional wooden seats and desks, and even traditional black board located at the front of the room with all of the chairs and desks pointed towards its direction. Everything else as in appearance i am sure you can figure out...

System
This is where you can read about the system, it is highly recommended that you get to understand this fully in all its context.

Rule I_Floors:​
Rule II_Roles:
This RP will be through a basic role/position/rank system where it will give the whole theme a bit of realistic spice.
Rule III_Schedule:
DON'T FREAK OUT! There will be NO legit time system. I believe this RP is advanced enough, don't you think?
Essentially you can do all of these except classes whenever you want but the schedule listed is when most people will be appointed/positioned/ and or be at. In accordance to all of this you can skip the whole day or skip some of it if you choose too. The teachers are only allowed to check morning and evening so classes and exercise is the only things you can legit skip to the point where if your caught even with a strict teacher they may punish you.

Rule IIII_Classes:
This is the list of subjects that teachers can teach, and students can learn. The scene of which the teacher will teach the student won't actually be typed out because hey who wants to learn when most of you are literally getting out of school IRL, am i right? If you want to day dream then you can type that out but teachers remember your not actually teaching them just act like you did.

More subjects may be made later on if others think it is necessary. No real stats will be made although remember the golden rule ''More knowledge makes you smarter!'' Students can only learn one subject at a time per year and teachers can only teach one subject per year.

GOLDEN Romance Rule:
Due to legal reasons anything sexual and or anything of the like WILL NOT BE ALLOWED! If you do so then i and anyone under the GM such as moderators are not in fault, YOU ARE! I repeat.. THIS IS NOT A LIBERTINE/LIBERTEEN!

SILVER Personality Rule:
There will be '' special '' traits that people can choose from in the OOC/Sign-ups once they are making there character. These traits will give the character some advantage over others.
Here are the list of traits:
Yandere Trait: They can use weapons, not saying everyone else can't use weapons but yandere's are known to always somehow be able to find weapons of some sort...
Intelligent Trait: They can take two subjects and they are usually more smarter than the rest, however also weaker than others.
Jock Trait: They are strong but not too quick in the ol head if you know what i am saying.

More will be made later on as this RP further develops...

BRONZE Character limit rule:
One character per member only... If someone is able to give me a good enough reason to change this then i will but till then this rule will stay.


If you happened to read this whole thing first off, holy shit thank you and second OMG you must be really interested. I put a lot of work into this and i really hope this RP will get as big as my other RP. If you have a question then ask if you will and if you have a comment then post it too! :D​
​
​
Z

Not sure if I should take offense or not... Just been looking for some good rp's I swear I don't join them all.

Original poster
Not at all, we just seem to take interest in a lot of similar ones~<3

Phew, Well that is a very good thing than... Great loves to have on things <3
K

Original poster
OPEN SIGNUPS - Ōsaka Academy | IwakuRoleplay.com
OOC/Signups
The official sheet is all the way at the bottom so copy and past that and fill out, your welcome to design it also if you can/feel like it.

Is 'Jock' as you call it 'delinquent' as I know it?
Show hidden low quality content