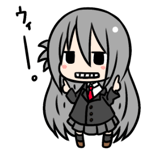 Physical Description
Height: 165 cm
Weight: 52 kg
Hair: Dark blue
Eyes: Emerald
Limb Dexterity: Ambidextrous, originally right handed
Detailed Physical Description: Jun has a distinct brown skin (California Gold on the chart provided), an unusual skin color for those born in Hokkaido. Her hair most of the time is and messy, unkempt, dark-blue, medium length hair (2nd pic below), which she often ties into a ponytail when she's doing any physically demanding activities. Her body is quite toned, but the muscle is not that defined. Due to the amount of fights she's been in, she has several scars on her body, notably on her left temple, almost reaching to her left eye, removing a small part of her eyebrow as well, several cuts on her left and right arms, one long katana scar on her back, one stab scar just below the shoulder, and several bullet marks on her stomach. Her legs is also riddled with small scars and cuts. Her palms and fist are calloused and rough, with some small cuts. Her body hair is also fully waxed. Her right side canine teeth is a bit longer than her left. 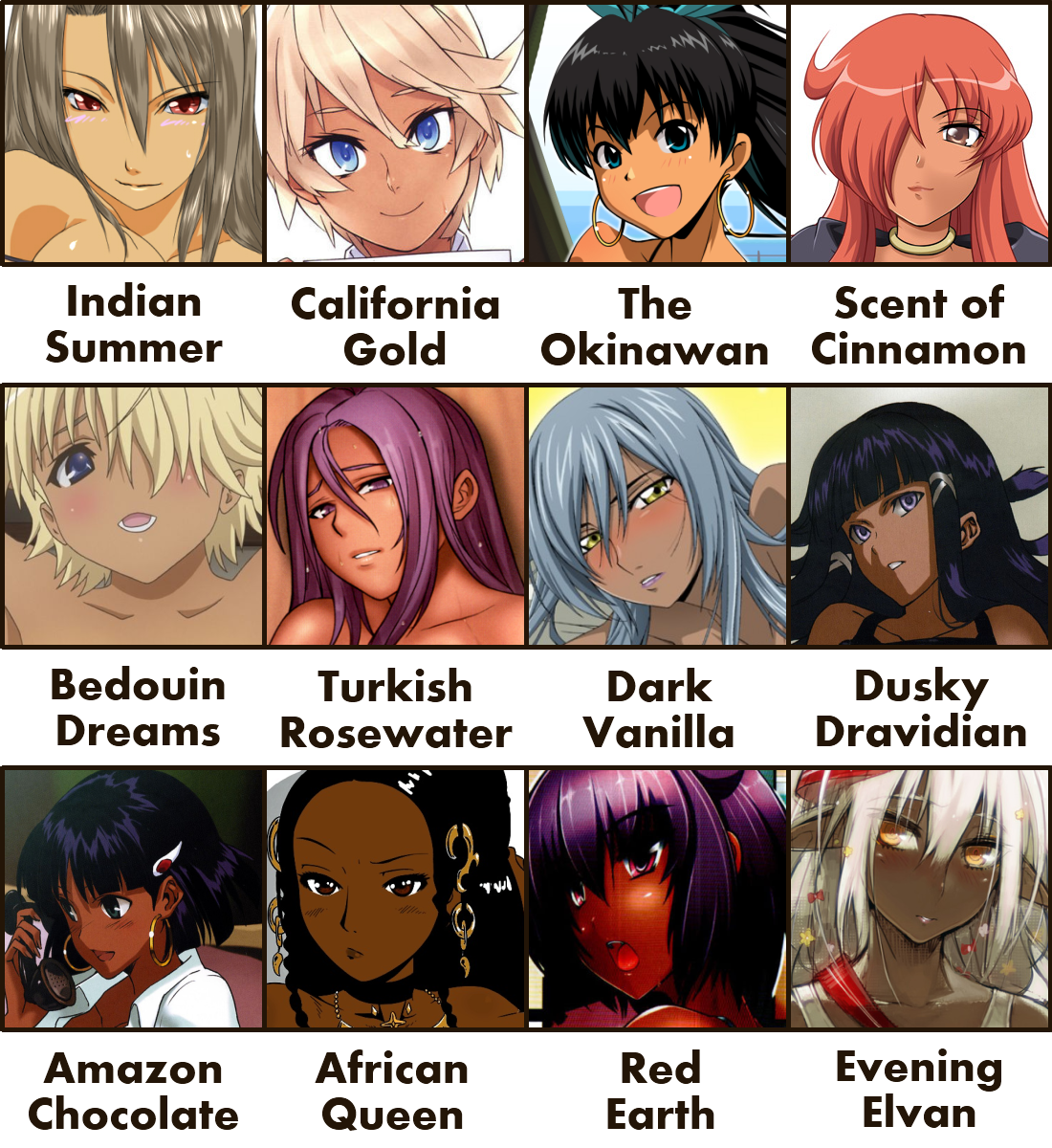 Typical Clothing/Equipment: For most of the part, she wears a black suits, completely unbuttoned, custom made to allow movements for fighting, light grey shirt, with one unbuttoned button, and black long tie, along with a black finger-less gloves, misaligned (tilted on one side) dark olive utility belt that connects with a holster on her right thighs, with a slot for her katana if she choose to bring one, and dark blue metal padded sneakers. She would roll up the sleeves of her suits and shirts when fighting. She carries around 10 throwing knifes, lockpicking tools, telescopic baton, and HT on her utility belt, another 5 knifes, a battered pocket watch, and handkerchief on her inner suits pocket, a S&W 29 .44 Magnum Revolver, which she flaunts on her thighs holster, and a modded Sig Sauer P320 hidden in her inner suits pocket. Casually, she wears a black zip-up hoodie with the kanji "誠" or 'integrity' on the back side, a white tank-top, short dark green skirt, black spats, and the same fingerless gloves and sneakers from her 'job' outfit. On both cases, she wore a slightly thick black glasses, and always carry a spare. She's also often seen smoking a cheap cigarette as well, and doesn't have a bad case of nicotine addiction.

Personality/Attitude: Jun has a dark past, but she has most of time buried those under her mind. Most of the time, she's a spunky and tomboyish girl, who wears her heart on her sleeve. This does get her into some trouble since she often just says what she thinks, and since she rarely backs away from a challenge, this often results in a fight. She is quite liked by her peers of course, since she brings a light on the doom and gloom nature of the organized crime. She doesn't take a lot of things seriously, unless it's one that her superiors tasked her to do, and she's also naturally curious about stuff, and is willing to try out new stuff. She is rather stubborn when she already set her sight on something that she wants.

Despite being a lieutenant of an organized crime, she rarely uses that standing as a leeway to get what she wants, which earns her the respect of the areas under her control. She does, however, uses her martial arts prowess to get what she wants, if it's a non-negotiable thing. She loves to fight, and the one reason she got into the business itself was due to her wanting more action in her life. She's also quite reckless, often diving in head first, with ear to ear grin, before knowing all the details, and while she is still alive and kicking to this day, she has brushed with death several times in the past. If anything, this brush with death just made her slightly more reckless, chasing that high sometimes.

She doesn't get ticked off quite often, but when she does, you can be sure that it's not going to be a pleasant sight. Rather protective of her subjects and friends, and would put their safety above hers. Doesn't handle stress that well, but more often than not would still finish the job. Loves gaming and eating, which she usually does to alleviate the stress. Can handle stealth mission quite well, but is prone to just saying 'fuck it' and let loose if it gets too stressful.

Skills/Talents: Self-taught MMA (mix between karate and jeet kune do), some form of gunkata, quick draw and aim, quick eating, rarely gets fatter despite eating tons, and some iai style swordplay. Also able of some form of cooking, but nothing significant about it.
Favorites/Likes: Games, big buffet and all you can eat, fighting, rains, dogs, cute stuff, beetles, guns, and history.
Most Hated/Dislikes: Restricting time limits, unnecessary restrictions (stuff like no running in hallway, needing to be 'formal'), nosy people, goody two shoes people that always feel the need to remind people of rules. This doesn't mean she hates rules, for as long as she understood why that rules has to exist, she will follow it. Anyone cruel to animals.
Goals/Ambitions: Finding one. She's currently just enjoying the present, without a future goal.
Strengths: Slightly higher dexterity and speed than most people, able to climb and wall jump, higher pain tolerance, optimist, doesn't condone unnecessary violence, highly committed and will finish what she started, a great person to talk with, and respectful of anyone she deemed deserving of that respect.
Weaknesses: Reckless, has -6 eyegrade on both of her eyes, leaving her rather useless with firearms without her glasses, overly stubborn at times, violent tendencies, rather boastful, and doesn't like when she's being told that she's wrong. Also abysmally bad at time management, and often needs to rely on other people to remind her stuff.
Fears: Her past, abusive behavior, death of a loved one, machine gun volleys, and ghost
Hobbies/Interests: playing games, eating, training, and going to dog cafes.

Philosophy of Life: If you can't break through a wall, then you're just not punching it hard enough.
Religion/Beliefs: Atheism
Fetishes/Strange Behaviors: She acts younger than her age, some even calling her immature. She loves someone who can dominate her, in combat or in bed, so she's attracted to people stronger than her. She's surprisingly attracted to those that's weaker than her, but has the mind and tenacity that's stronger than her, or in short, those that are not scared to her. Has fetishes for armpit and thighs.
Most Instructive/Painful/Memorable Experience:
Losing her family in an arson attack. Jun was only 6 years old when it happened, and in an instant she lost everything she hold dear. She never knew that it was an arson attack, because her psychologist opted to hide that details to soften the pain. She ran away from the orphanage at the age of 12 due to her tendencies of picking a fight with the others, and then getting severely punished for it, and with the money she inherited, started living on her own. She didn't rely on the inheritance that much however, since her family were just a standard family, so she started looking for oddjobs and such.

On her 16th birthday, she bumped onto one of the organized crime henchmen, and not wanting to back down, picked a fight with the henchmen. This didn't sit well with the family, and so a hit was put to capture her, which was done rather easily, since she is not that stupid to fight someone with a gun. Captured and beaten, she was brought to the family to face execution. Despite being beaten and threatened with a gun, Jun never showed fear of death, and only allowed being dragged around because "she didn't want to die from someone like you (the henchmen)". She even managed to spit blood on the lieutenant's top dollar shoes. The lieutenant at that time recognizes her drive, and rather than executing her right then and there, laughed and offered her a position under him.

She's stayed under him since then, climbing up the rank along with him when he got promoted to one of the executives.


Willing to RP in historical times or in the future, or the present, and wherever. Preferably somewhere outside Japan, but i'm fine with both option. Preferably modern times where guns is an actual thing that exist and is widely used.

Both RedStar and BlueStar is okay. Sex is not a mandatory inclusion, but preferably it is included.

FemalexFemale/FemalexMale is fine, preferring yuri. Futanari or not is also negotiable.

Preferring one-on-one due to my schedule, but if you're fine with one reply a day to a few reply per week, then i'm fine with both.