NIC AND HIS MONOCHROME STYLE

Original poster
It's been a while. Realized that just sketching isn't enough.

Here are my most recent works. Taken with a Nikon D40 (my sister won't let me use the scanner, and Paorou usually has me at the wrong time) 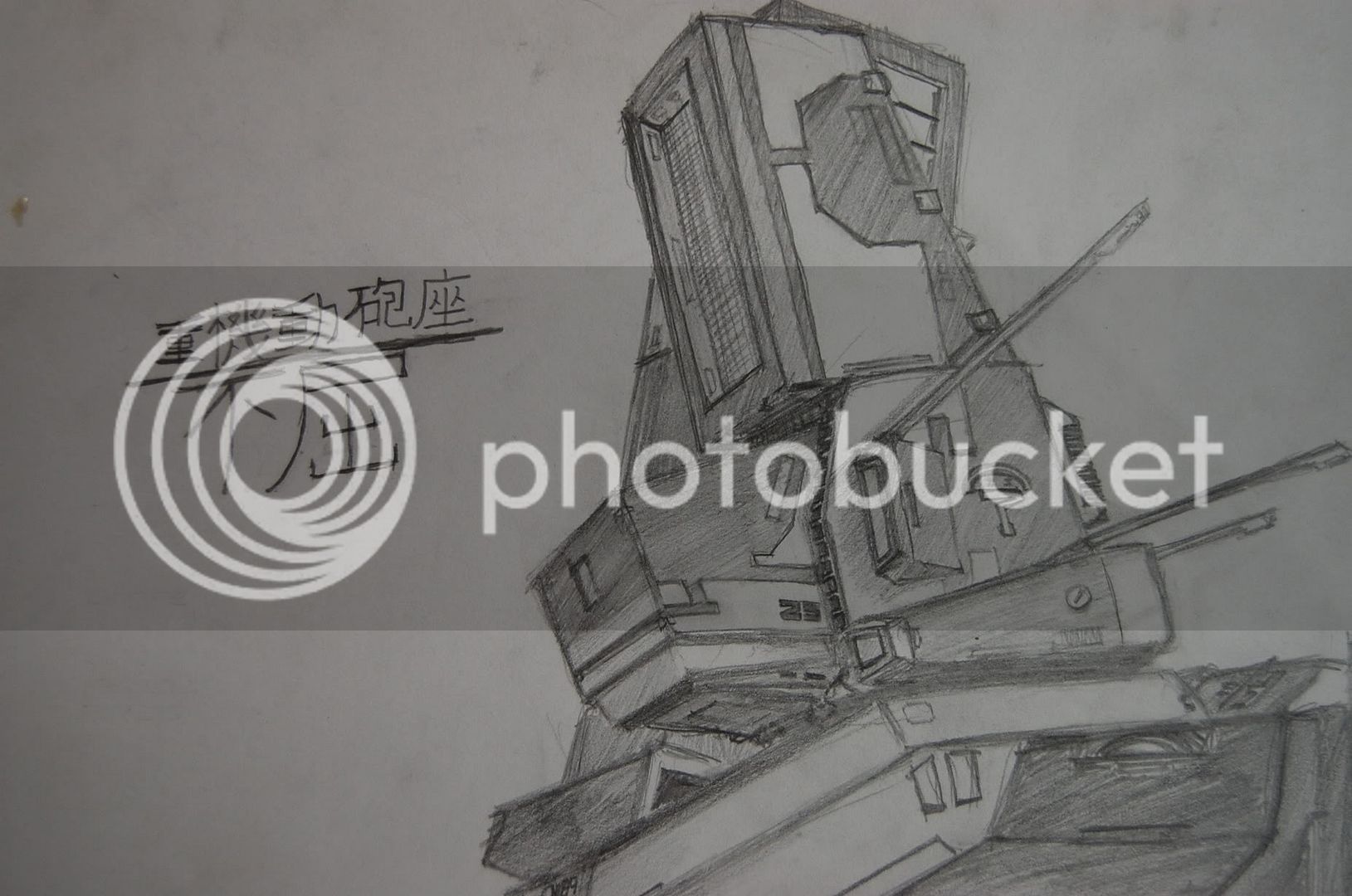 Juukidou Houza 'Fukutsu'
a.k.a. Heavy Mobile Weapons Platform 'Fortitude'. The 'metal man' I used in the Admin War. This is just the head, and shoulders, though. If you want to take a look at the schematic, just tell me. 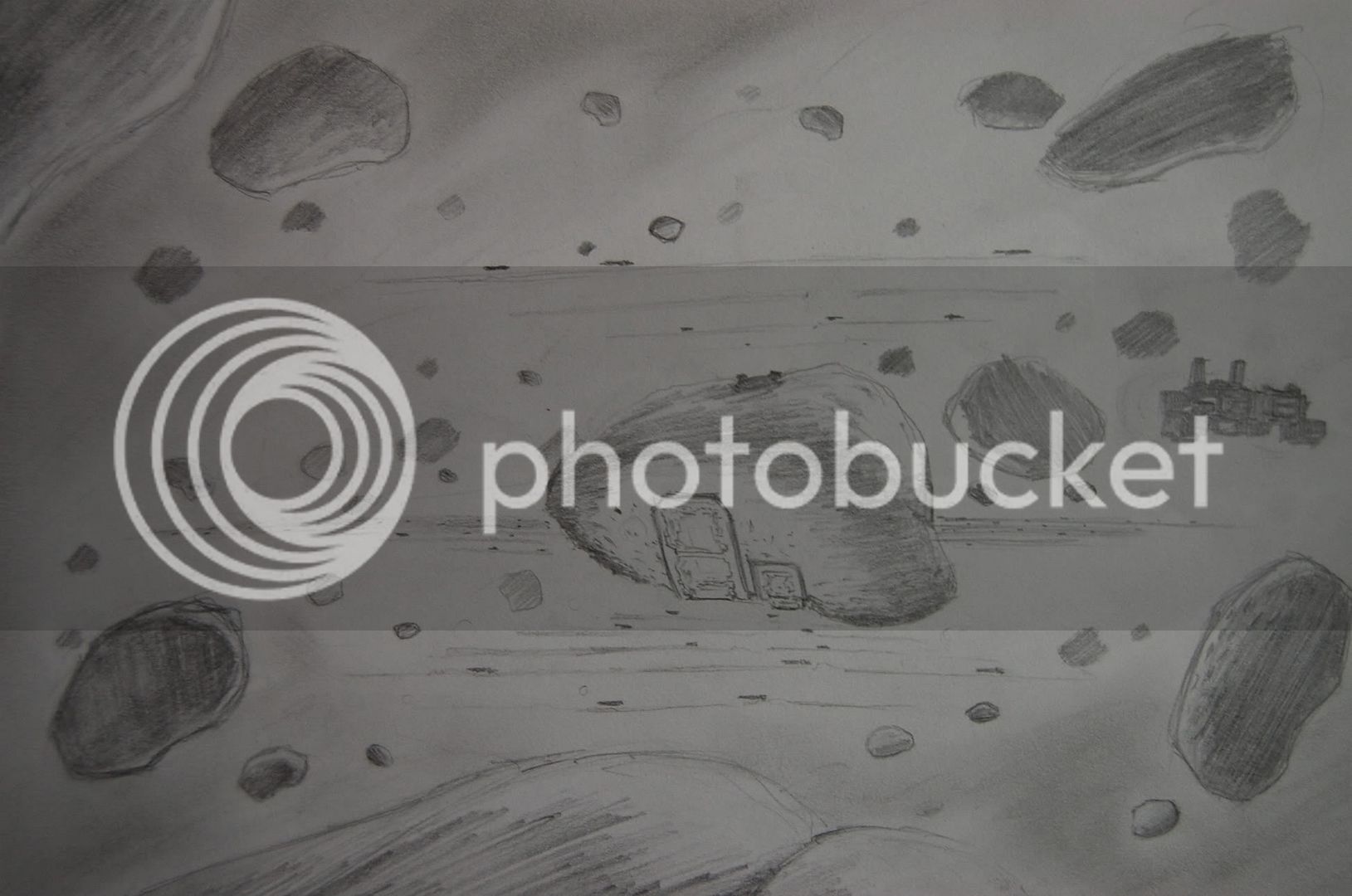 This is my depiction of an asteroid base. 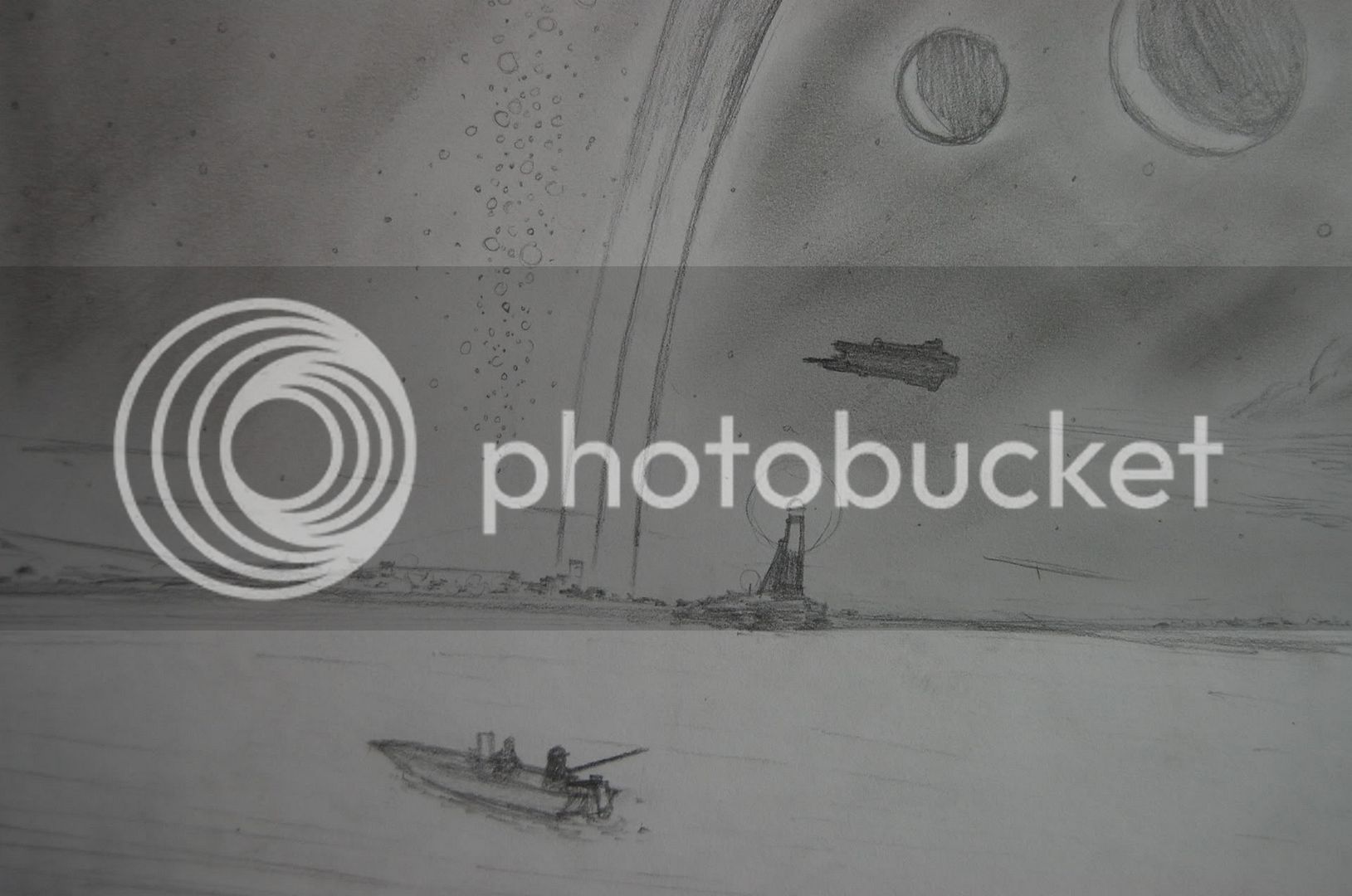 Night time on a ringed planet with two moons.

Original poster
0.5 mechanical pencil, 2B lead. I trust it as much as my 0.1 technical pen, and much more than my other writing materials.

I know I have more, just haven't taken them.

I love it! All of the pictures are awesome! The first pic has me really envious...I can't draw like that....

Man, I like your style. The last one was my favorite.
D

Original poster
I like your work too. Its something I could never do. Keep up the good work..
C

Warning: May have been drawn since last summer. 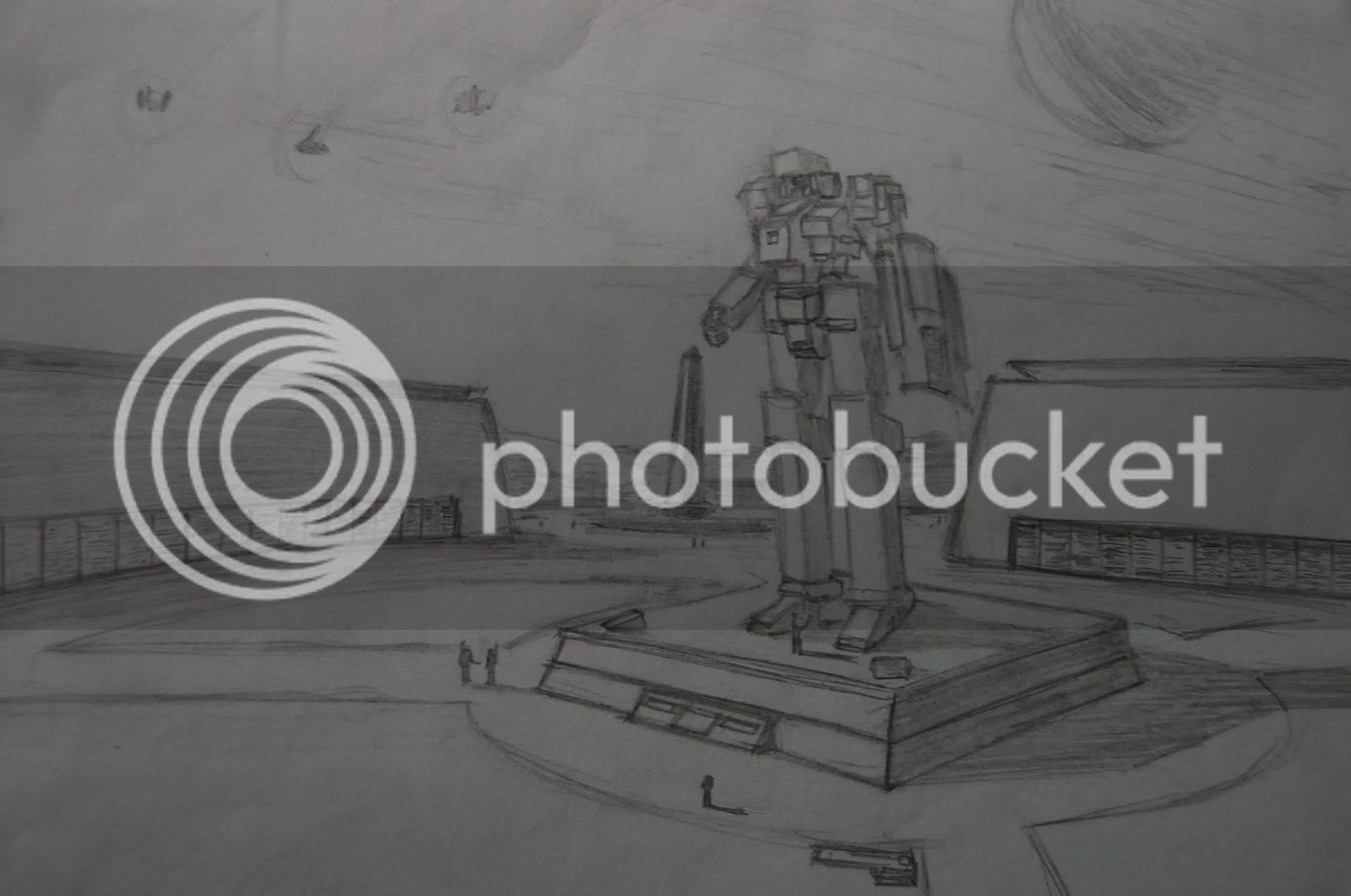 Memorial site. The giant robot may or may not be a statue. 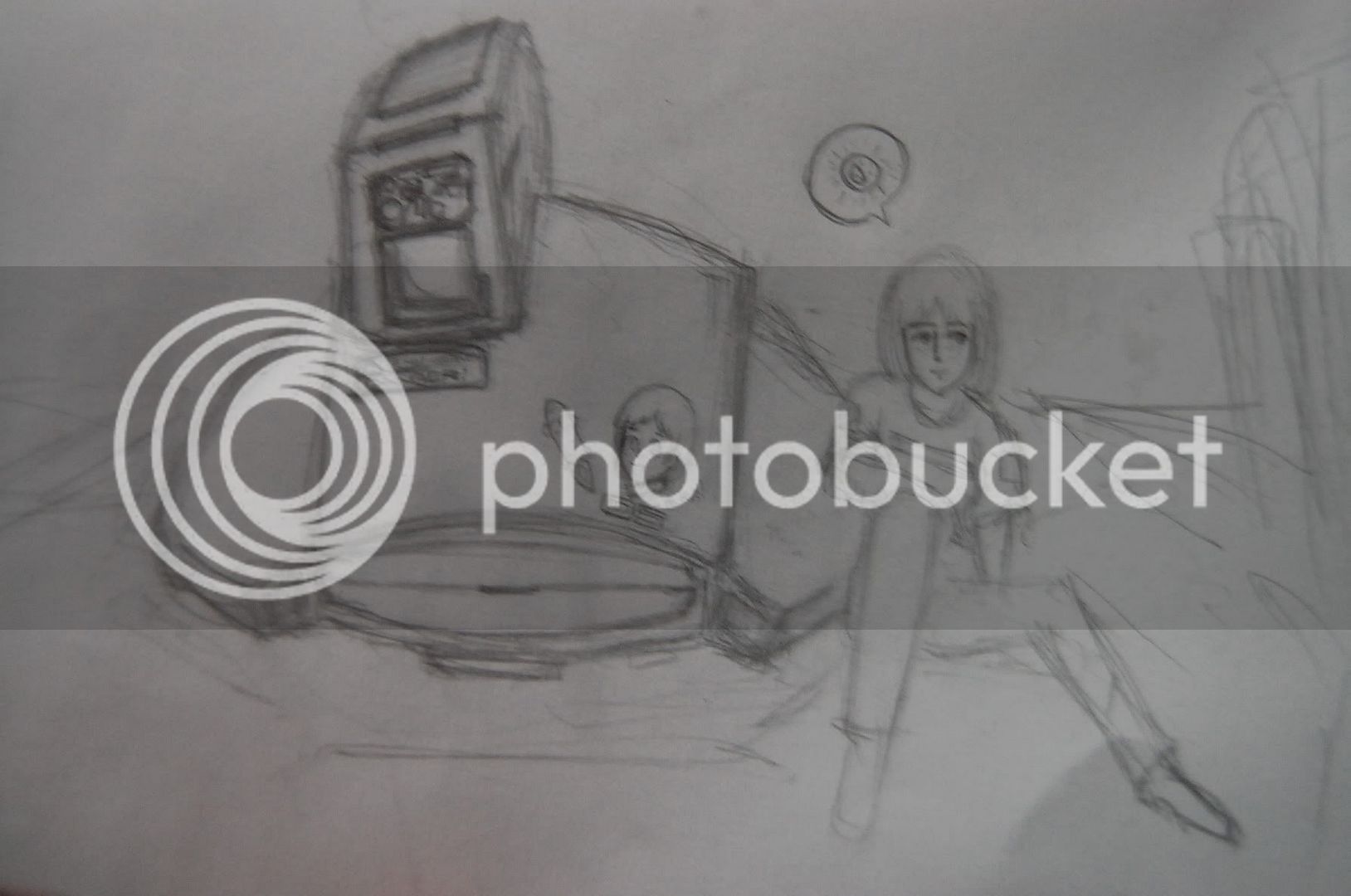 In before MOESHIT. Excuse the blurriness, my hands were shaking 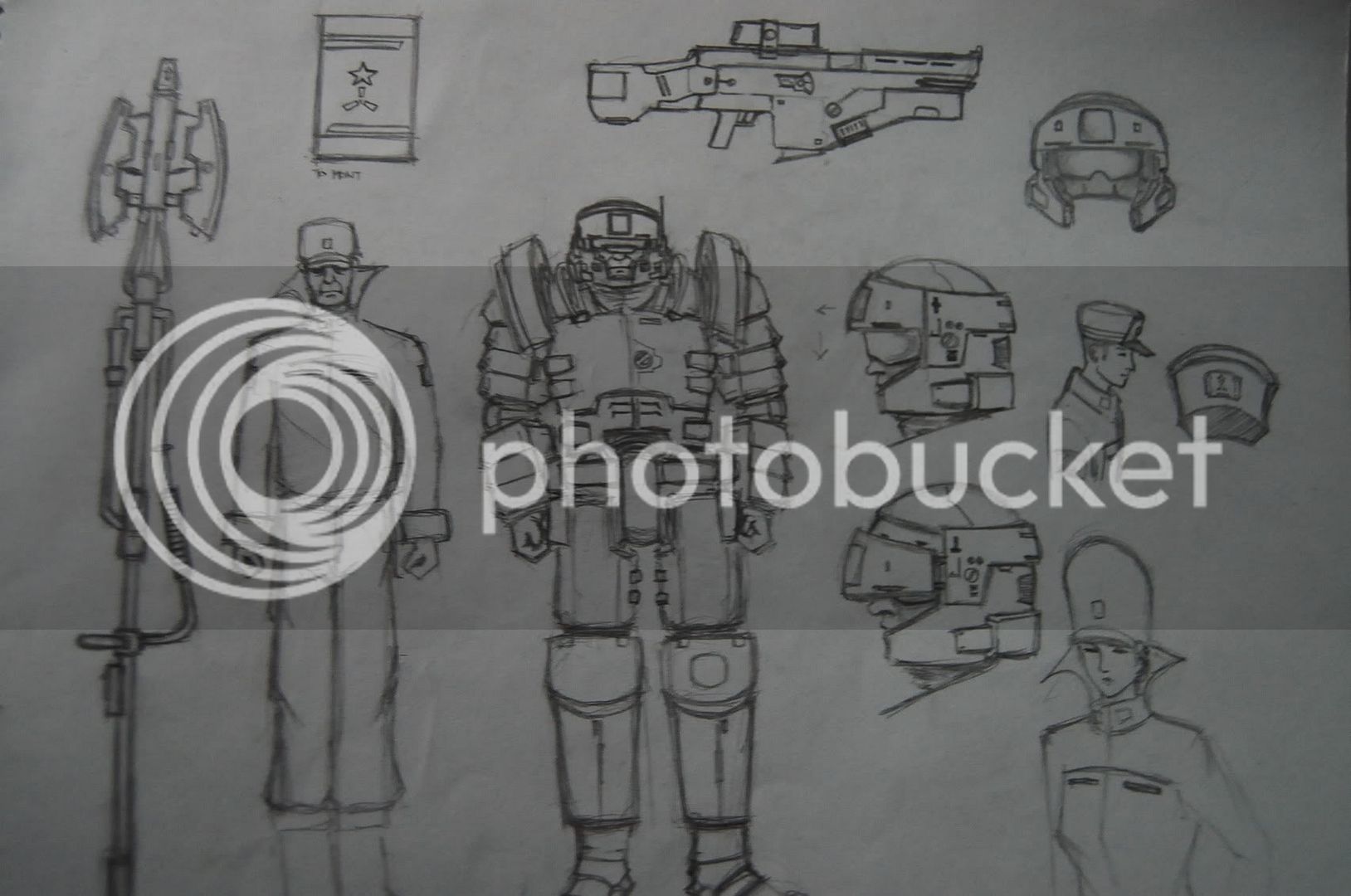 Teknikan personnel. Captain Nic is in the picture, he's next to the weird halberd. 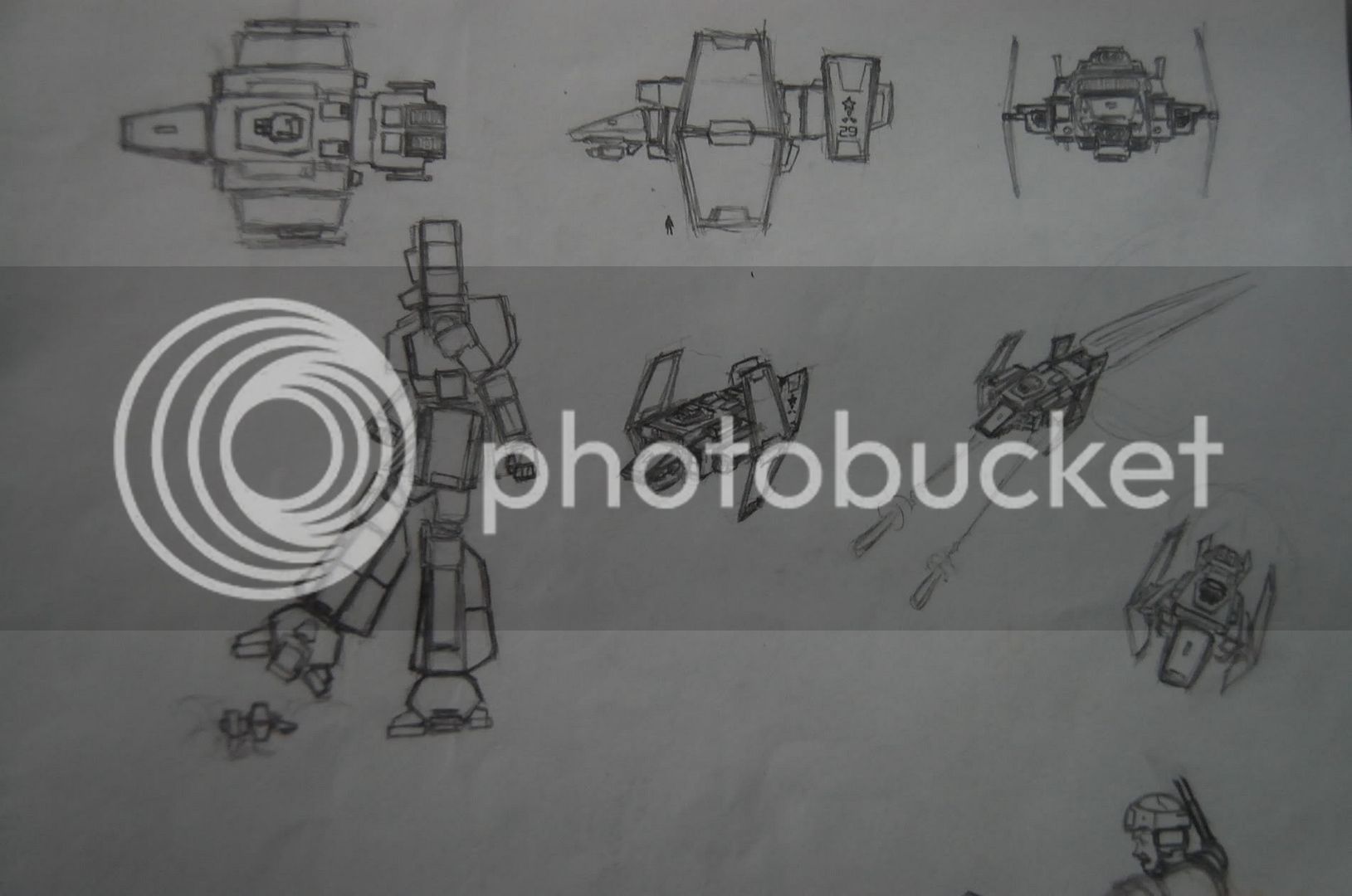 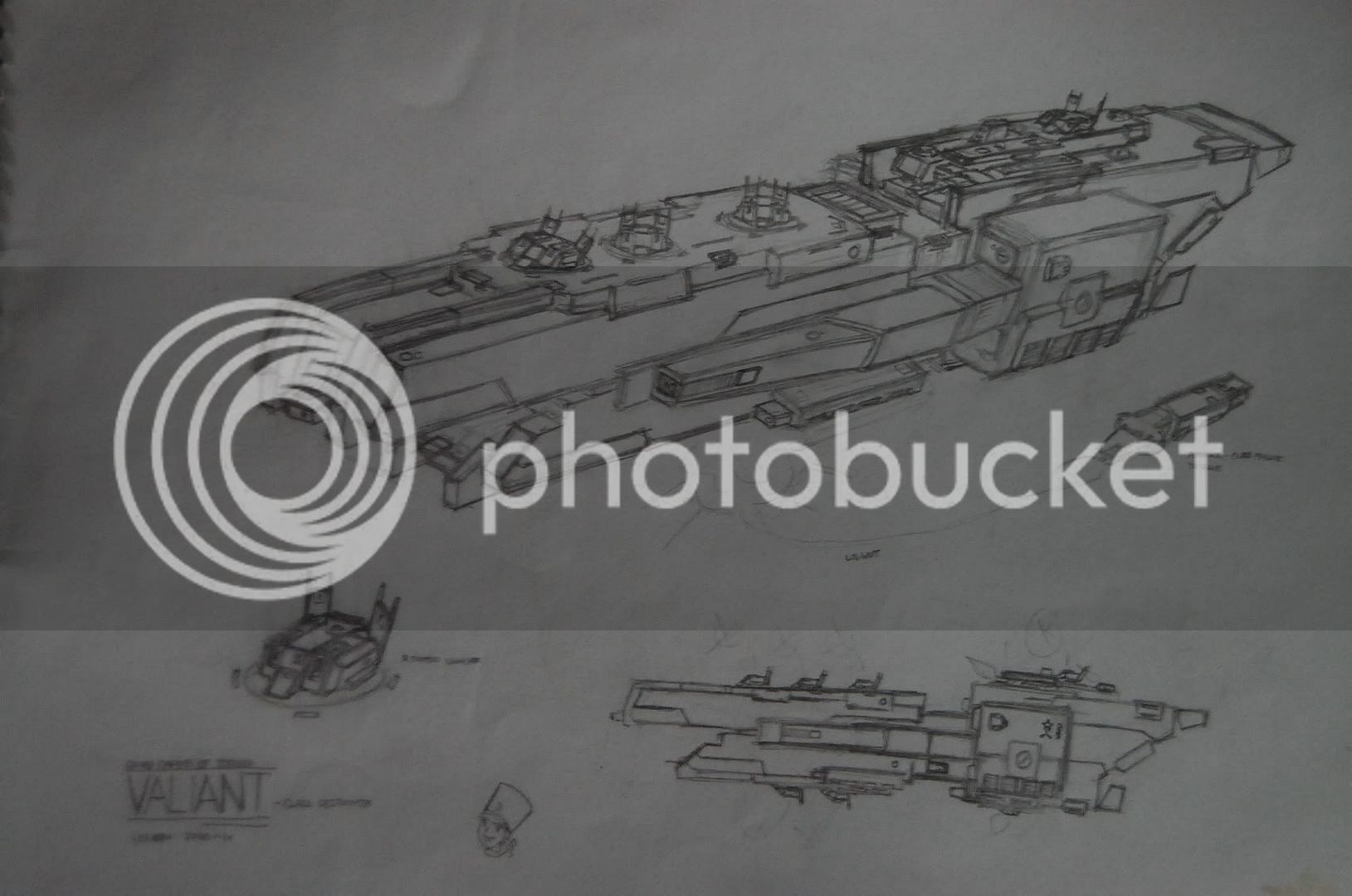 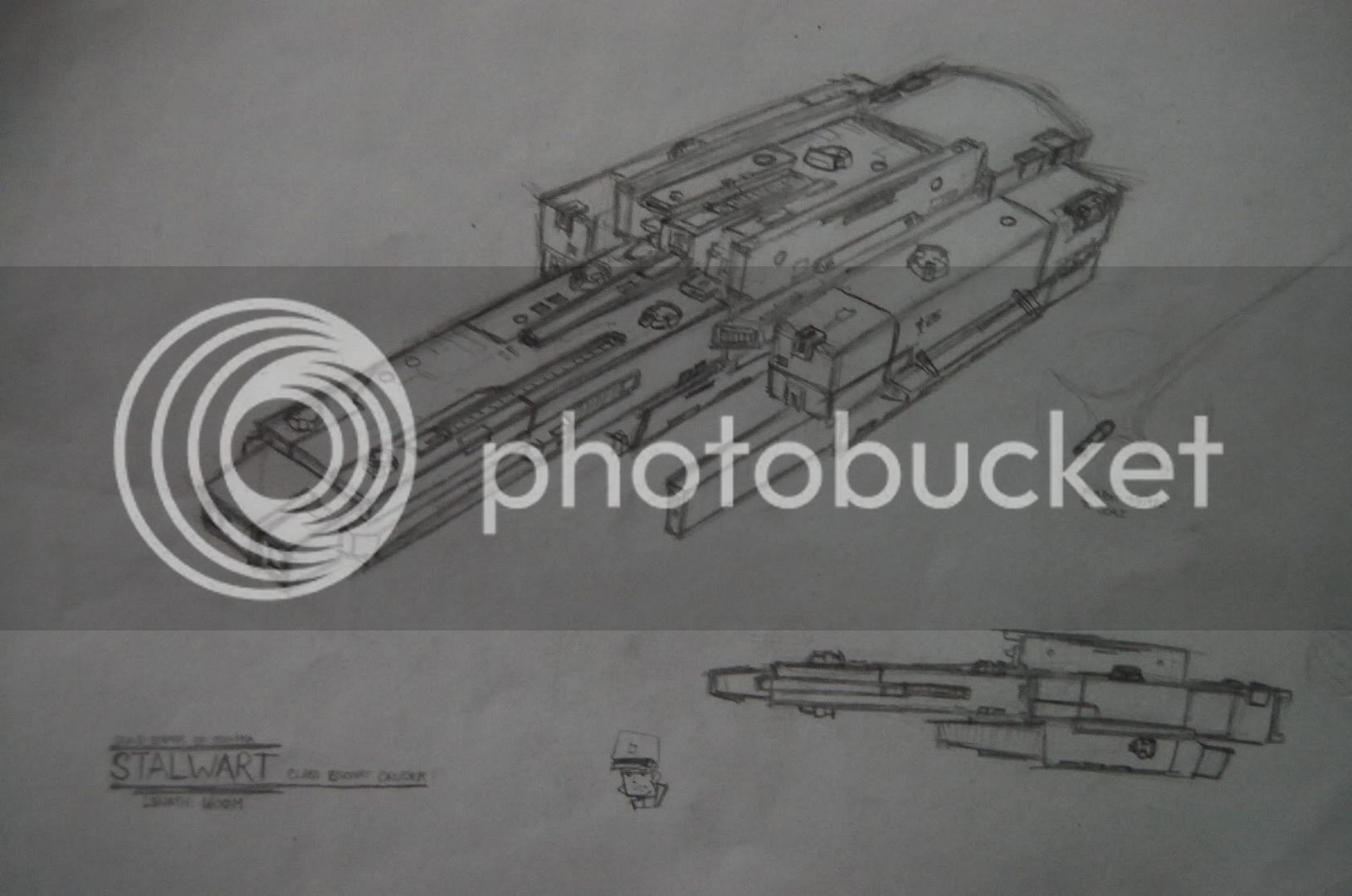 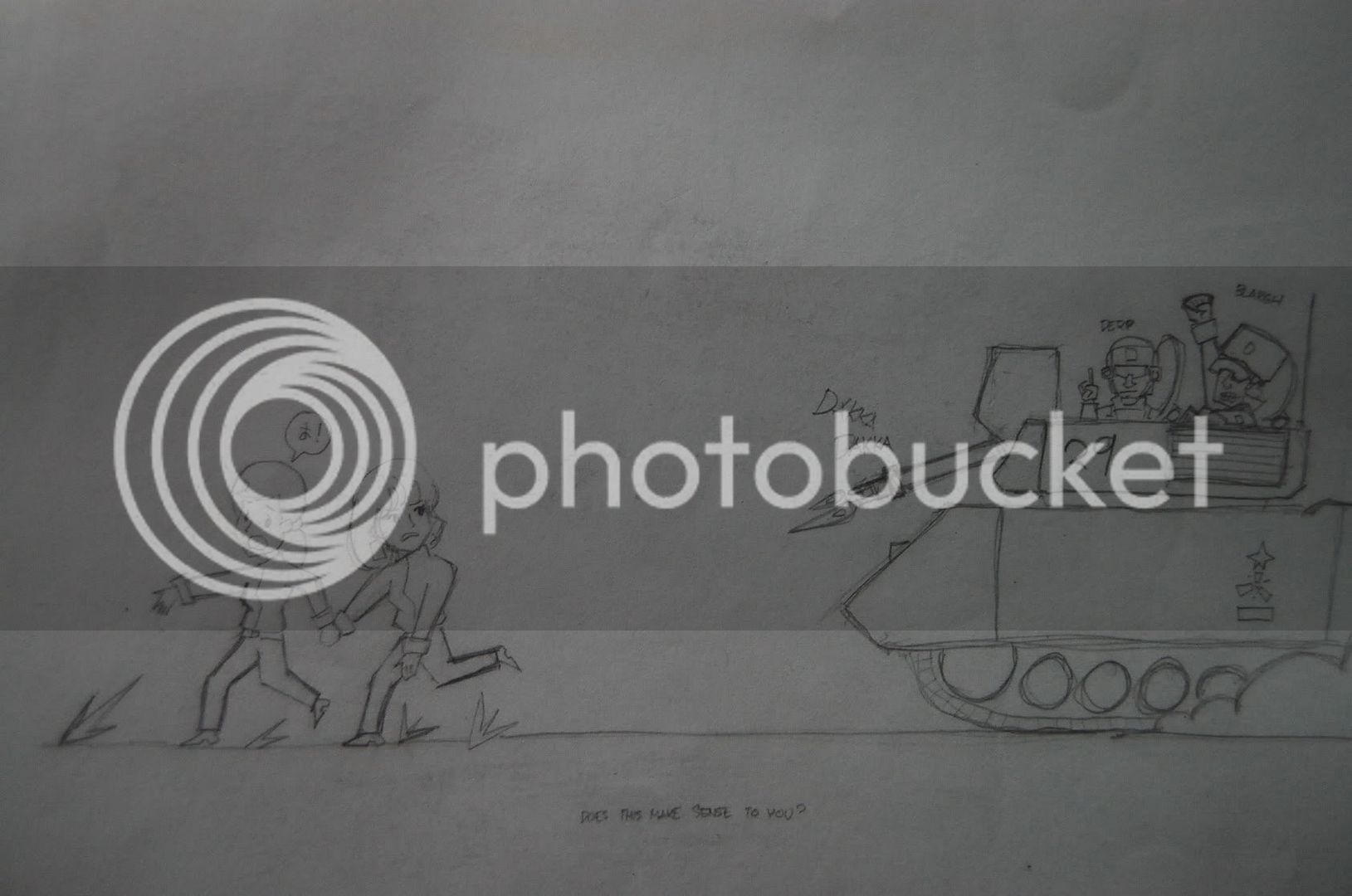 Does this make sense to you? 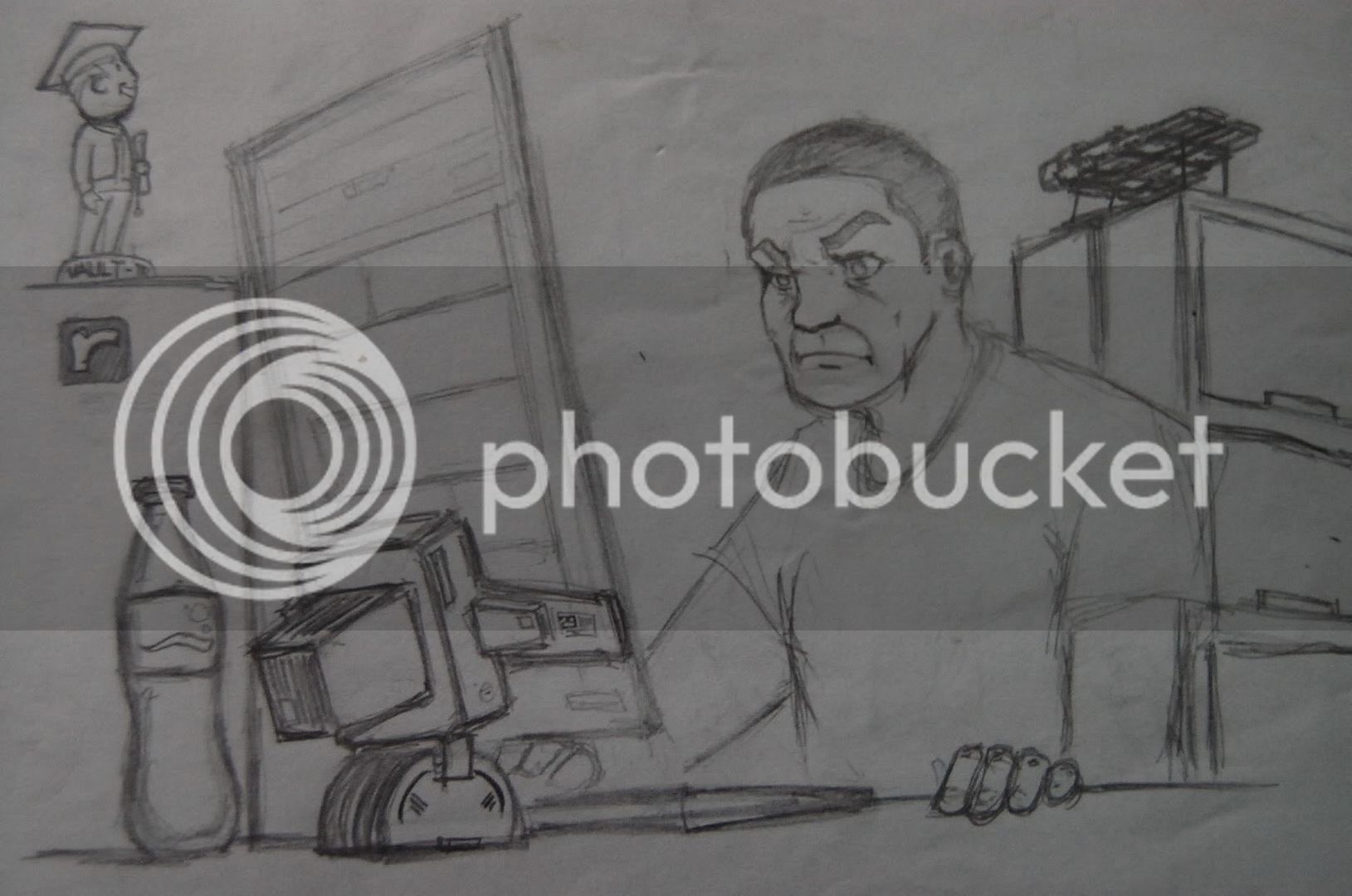 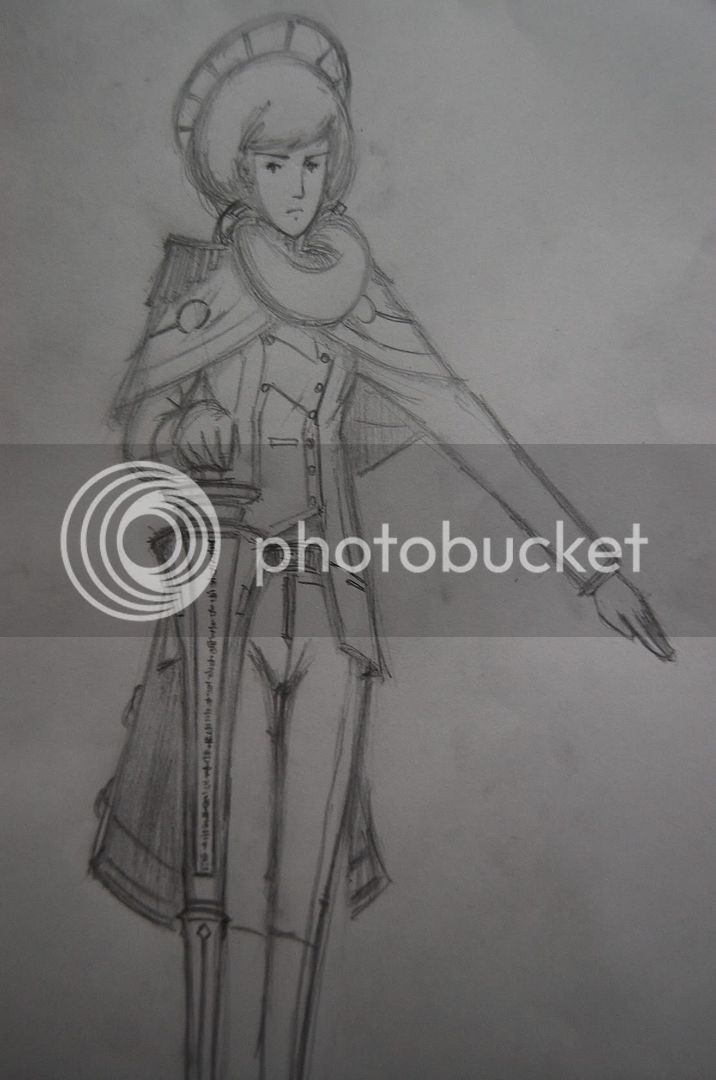 Don't get any devious ideas.

Once again, in before cuteshit.
F

Original poster
Your work reminds me of 70's and 80's animu and mangu, how they're actually detailed beyond the basic lines of the body, but their eyes are still open. All-in-all, good work cap'n.

Edit: Nice lance on that last one. Not really digging the pretty-boy face though. All of your work is well proportioned. The halberd with the axe head actually looks like something I'd attempt to use.

I had assumed it was a slightly masculine female, partly because of some really small curves in the chest area. :/

I dig the really clean retro look too. For some reason I always procrastinate about the art threads and never get around to complimenting most of them--Nic's and Razilin's stick out in my mind in particular.
A

Always envious of those people who can do mechanical drawings, having tried but FLAILED. Aside from the ship sketches, I really like that last drawing...
C

Original poster
Thanks. You guys almost thought it was PRETTY BOY FACE? I'm surprised, myself; I never intended it to be that way.

With that hair tied around her neck, you can only imagine how long it is.

Her lance is voice-activated.

I like the hair. I was certain she was female until I learned what others thought. Weak of me, yes. Bishounen doesn't seem like your thing, correct me if I'm wrong. The facial structure is a little ambiguous, but I like that.
V

Original poster
Wow Nic, wish I could draw like that. The asteroid base reminds me so much of Homeworld 2 and If I had the skill I'd mod those ships into the game.

If I may ask how long it took you to learn to draw like that....

EDIT: that relic logo made my day
C

Original poster
Bishounen isn't something I'd do.

So you wanna know how I learned to draw like that, eh? Let me do a timeline:

3. The Advent of Homeworld (1999). The game sort of did a reawakening within me, and once again I drew space ships, but this time, in an attempt to capture the essence of THREE-DEE! 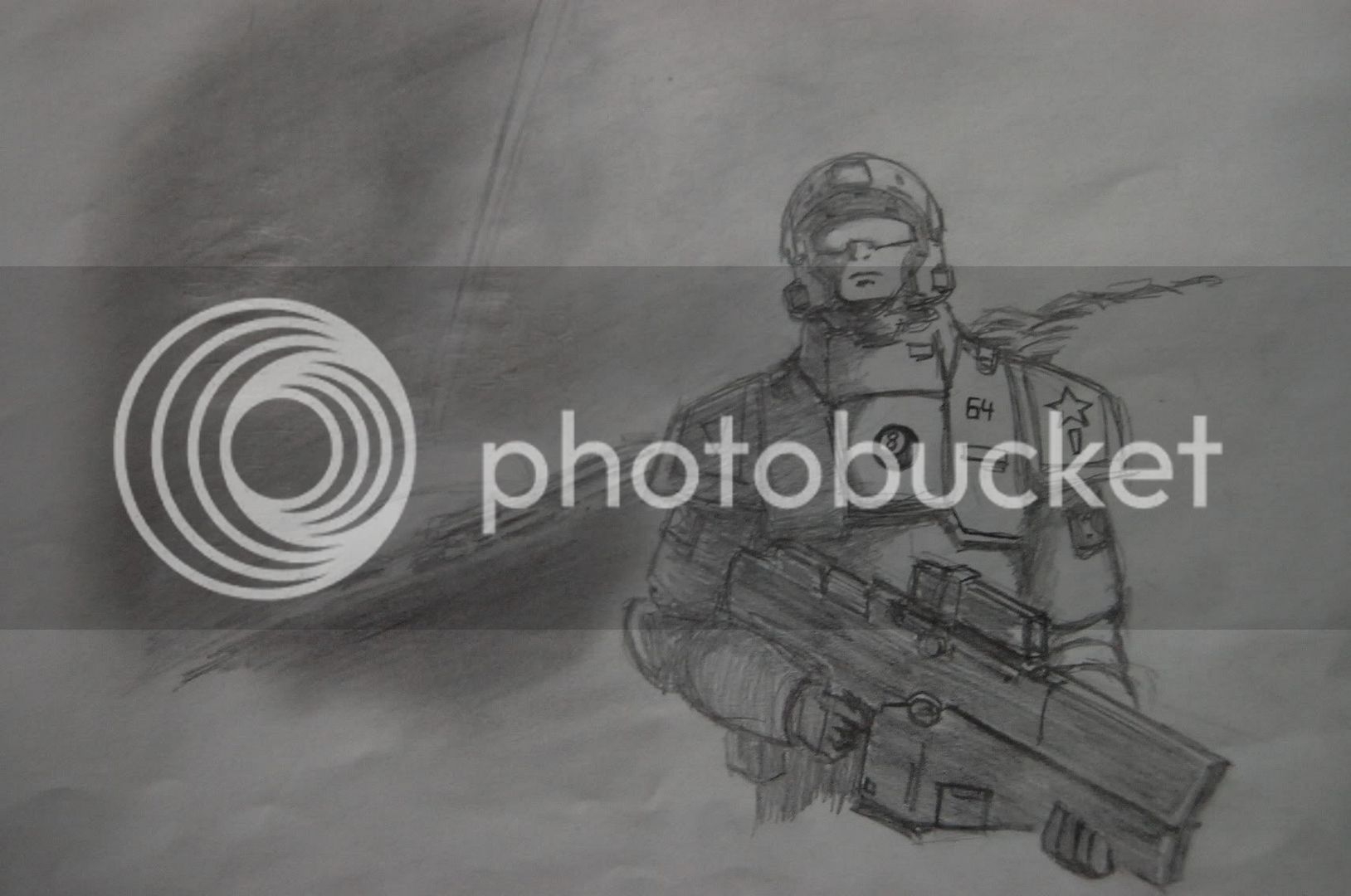 5. 2006-2007. The Battlefield series of games manages to catch my eye, notably 2142 - I suddenly get this urge to draw epic battles. Drew the Orky Ideon, which Paorou then expanded upon in the form of a flash movie. Tried to draw Necrons too.

6. 2007-2008. I am taught how, and learn to do shading and shadows with the pencil, besides other techniques. When drawing characters, I now begin to take inspiration from Tomonori Kogawa's and Yoshikazu Yasuhiko's styles (part of the reason why my art looks retro).

I've spent more of my life drawing machines than people.

LURKER MEMBER
FOLKLORE MEMBER
I just realized.. I have a job now.. I can pay people to draw Isabella now!

Nic, your work never ceases to amaze me!
F