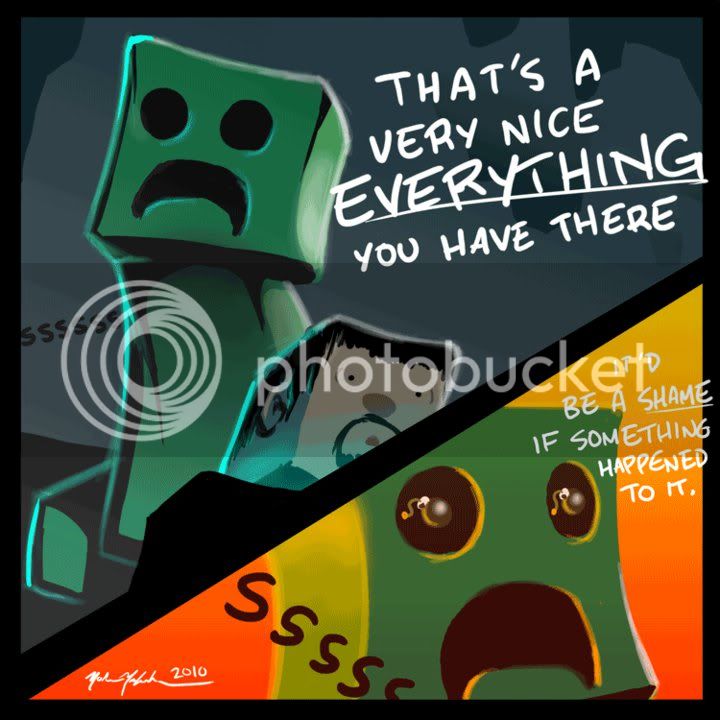 Minecraft; a game about placing blocks whilst running from skeletons, in the words of it's creator?

So who all on Iwaku plays it, if any? What sort of insane shit have you built, only to have the fucking Creepers come along and explode it?

Gods, Creepers. There's a reason I play on Peaceful. Because if I don't, I'll step outside of my cozy little den and on the top of the hill it's built in to there'll be six Creepers sitting there, waiting for me to step outside so they can jump down on my head. I'm not kidding either. I have seen six Creepers out there.

TWO FUCKIN FORTS. They just wander on over and all your hear is the "SSSSSSSSSSSSSS" right before they explode and let the skeletons and zombies in.

I've taken to building all my forts from stone now. Fucking Creepers can't get me now.

If I was still playing singleplayer(I found an awesome server), I'd continue with my impenetrable fort design. Sloped blast-resistant walls, double-door moblocks, equally blast-resistant inner keep, overwatches for arrow fire, and the entire place covered in so many torches that nothing can spawn but friendly little sheeps and piggies.

I downloaded 1.1.2 when it was free because of server trouble.

It is EPIIIIIIIIIIC! Building a fortified harbor, got the first lighthouse up and converting it to run on lava. Also play on default.... peaceful is boring! Exploring tunnels, running out of torches and getting lost is great for suspense filled paranoia!

Also build everything out of cobblestones, the eventual castle I will build on the island offshore will be all out of baked stone though with iron doors and tntapaults.

Once I get an account I'd be interested in running a server, possibly.... For Iwaku members only.
J

I play, best thing i did was a monorail system (floating track) connecting my 3 stripmines and several different forts.
V

ST-T-TRIPMINES! I prefer to have a minimal impact on my natural surroundings and make shaft mines with huge manmade underground caverns deep near the bedrock where minerals are plentiful or making natural tunnels safe-ish and expanding them with mire tunnels ending up with labyrinths and having to put signs so i can find my way in and out.and making temporary barriers so things don't come out of unexplored tunnels >_> <_< >_> <_< >_> I love to hate them creepers.

Eew. Stripmines. Who in their right mind would ever ruin the natural beauty of their landscape with a visible stripmine? Build a monorail track over your giant topography map of the Earth or your scale model of the NCC 1701 Enterprise.

Original poster
DONATING MEMBER
FOLKLORE MEMBER
Stripmining is how I get all mah Diamond.